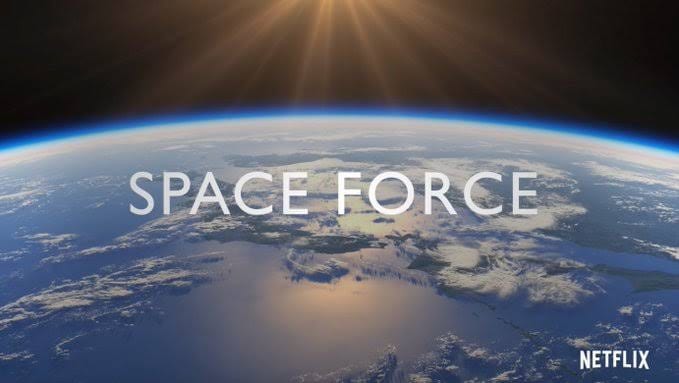 In this post, we are going to talk about the Space Force update, cast, and details. It was already known that President Trump’s announcement of the sixth division of the Armed Forces is not going to be neglected. Many were seeing it as a bold move, but the internet had a lot to talk about it more funnily.

It was because the context about “Space Force” was not clear, as he could not explain what would be the primary purpose of the force. He just said that American needs to dominate space too, and that is why they need to protect satellites from attacks. The interview became viral in hours and the internet started trolling the statement.

Similarly, Netflix also decided to make a parody of the announcement. The trailer was revealed soon, on 16 January 2019, and the trailer was filled with a cringe, and I did not see that coming. It got me when it said, “OR SOMETHING.” It was precisely on the point because that was the approach from President Trump while announcing it.

The captions in the video were exciting because it is a comedy show and that is what a comedy show needs. Also, it stated that the show would be made by the makers of The Office, which was an amazing show. But we might expect the show to premiere in a few months.

Moving on to the cast, the only confirmed member is Steve Carell. Additionally, the show will be created by Greg Daniels and Steve Carell, who produced The Office, as I already mentioned. Netflix provides no other information, and the trailer is also just a few hours old. Therefore, we will have to wait for a while to get some more information about the show!

After the declaration by President Trump to form a sixth force “Space Force” Steve Carell and Greg Daniels, star of and maker of NBC’s The Office, had a marginally unique thought that was an out of the box idea. They met up to fabricate and make sweet money-grabbing Netflix Series.

Space Force update is set for May 29, 2020. Netflix will definitely profit in huge Ransome as “The Office” fans will come together with “Friends” fan to pour their love to this brand new series. Steve Carell, along with Lisa Kudrow, are making their comeback on our screens as brand new characters. As “The Office” is set to leave Netflix in 2021, this would be a chance for Steve Carell fans to continue their subscription to streaming giant.

There is no trailer for the show yet but we should expect one really soon. Although, Netflix did post a teaser for their fans.

.@SteveCarell will star in a new workplace comedy series he co-created with #TheOffice’s Greg Daniels about the people tasked with creating a sixth branch of the armed services: the Space Force! pic.twitter.com/6GEFNgP18w

Space Force is a star stud show with numerous famous and big famous, which includes Steve Carell and Lisa Kudrow, who are seen playing lead roles. We have Steve Carell (Office, 40yr Old Virgin), who will play Space Force venture lead Mark R. Naird. Lisa Kudrow (Friends, The Comeback) will play Maggie Naird, who “is a Washington Air Force spouse who has sublimated pieces of herself to her significant other’s profession for two decades. John Malkovich (The New Pope, Billions) will play Dr. Adrian Mallory. Dr. Mallory is the splendid Head Science Advisor for the venture and is worried about not transforming space into a combat zone. Ben Schwartz (Parks and Recreation, Sonic the Hedgehog) will play F. Tony Scarpiducci. He is a narcissistic media advisor with Machiavellian objectives. Diana Silvers (Booksmart) will play Erin Naird. Erin is Mark Naird’s mainstream and smart little girl who starts to carry on in the wake of being moved to a military school to be nearer to her dad. Brownish Newsome (Bajillion Dollar Properties, Brockmire) will play Angeli Ali, a driven helicopter pilot. Jimmy O. Yang (Silicon Valley) and Alex Sparrow (Unreal) will repeat as Doctor Chan Kaifang and Yuri “Bobby” Telatovich individually.

Seeing such a cast, the show is set to reach new heights and be a blockbuster hit.