The World changed when a portal opened, connecting the world to another world with monsters and creatures of all kinds. They come into the world and wreck havoc as they see fit. Amid the chaos, a group of people has acquired powers, and they fight these monsters to the best of their abilities. One such hunter in this Webtoon, Solo Leveling, is Sung Jin-Woo. He is among the weakest Rank E Hunters. Everyone calls him ‘the weakest’, and he is the bare minimum powers compared to an average human. When this group of hunters find themselves in a dungeon and go through immense hardship, with only a few surviving in the end. This leads him to discover new things, and he starts to think that he can become the most powerful hunter. A new type of quest begins for Sung Jin-Woo.

Are you bored from reading too much black and white, generic Isekai mangas? Then Solo leveling is for You. Even though it is also a part of the current Isekai trend, you definitely won’t find it to be generic with some adventurous arcs to make you crave for more. As Manhwa are Korean creations, some might find the characters’ names a bit difficult to remember; otherwise, there shall be no difficulties as it is already available in English.

Here are some reasons for which it might intrigue you:-

A very clean and beautiful art style in a full-colored manga. Unique characters with different personalities, strengths, and abilities. Strong and well-detailed monsters and villains. Unique and badass battles in different places. And above all, a really good storyline with hype moments every chapter!

Risking his own’s life to make ends meet, Protagonist Jin-woo Sung ventures alone into many dungeons. Who knows what lies at the end of it? A treasure, A Raid Boss, A key to the next dungeon, or the secret behind everything?

No one knows why do these gates appear randomly. Is there a purpose truly of being only dungeons, or else does it mean something else which hasn’t been found out yet? What is the Player System? Is he the only player? And why was he selected? 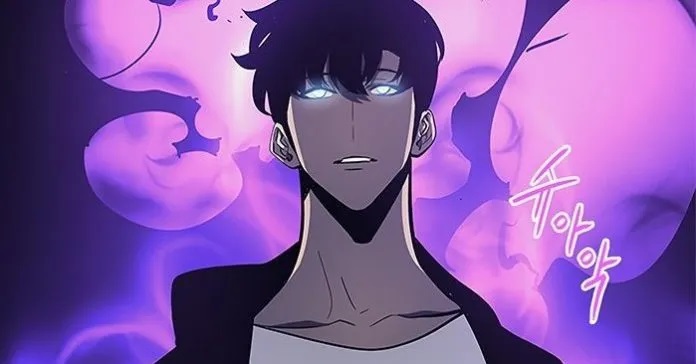 The main character development from its first to the last chapter is indeed impressive, It attaches you well with its pages. Though there aren’t many side characters present in most of the scenes as our protagonist does everything solo to reach the top.

It breaks our current generic Isekai trend of being randomly sent off into another world. That’s what made me like the most where the other world has become a part of the original world.

It is flooded with so many action scenes that it will please your eyes. Brilliant artwork with great fights is what has made this manhwa famous.