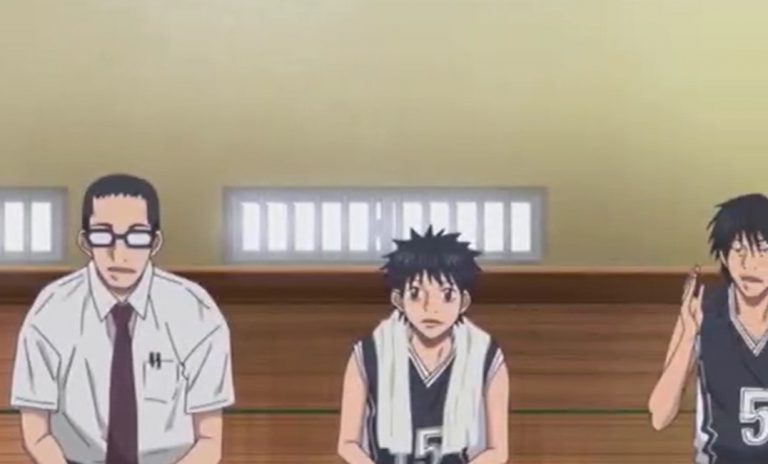 With only a single episode left for this Anime to end, let’s see how the matches between Kuzu vs Yokohama will end. Sora had a flashback when he was young and his mom always practices basketball with him. She got sick before he could learn some fundamentals about basketball. Back to the present Sora is watching Yazan showing him the skills that he learned from his mother. #24 Yazan is showing Kuzu what freshmen can do he scored twice and assisted Fuwa to score earlier.

The ball landed on Nabe’s hands who missed to score and hit the basket rim and #7  Kuzu makes a foul. Sora is out trying to figure out what is happening he thinks that he was on the same level as Yazan because of their same height. He remembers everything he shares with Yazan before the 3rd quarter starts. Sora thinks that Yazan is telling his team that they are not ready for the fight by looking at how Kuzu is losing the game.

Today we will be looking at Ahiru no Sora Episode 49 release date, preview, and recap. The spoilers of the upcoming episode are not yet available. Check the following details below.

Ahiru no Sora Episode 49 will be released on Wednesday, 23 September 2020, at 5:55 PM JST. Keep in mind that every Wednesday we will be bringing a new episode of this Anime. Take a look at the recap of episode 48 and the preview of the upcoming episode below.

Previously on Ahiru no Sora Episode 48

Chiaki looks at the scoreboard and notices that it is impossible for them to beat 90 points with only 8 minutes remaining. Kuzu needs 28 points to tie the game within 8 minutes. Natsume told Chiaki to give him more pass as much as he can meanwhile Nana tries to encourage her players not to give up until the last minutes.

Natsume uses an old trick of martial arts and scores a three-pointer. Shigeyoshi #12 Kuzu decided that he is going in to give more advantages to his teammate. He said he has taken enough break and they can’t keep on doing man-to-man for their defense. He also said he can last for the remaining 7 minutes. After Fuwa tricks Natsume and passes him Momoharu makes a nice block and prevents him from scoring.

Momoharu is surprised that a referee calls it a free throw. Shigeyoshi gets in and Nabe is out and Natsume teases him for scoring 4 points in the first quarter. Shigeyoshi stepped him on his shoes and walks with confidence that he is going to help his team. Natsume notices that all players are too slow and it’s not easy without Sora who is on a break.

Natsume scores another 3-pointer from a long-range distance. The score is now 97:68 with Yokohama leading and Kuzu has made five fouls. Three minutes left for the 4th quarter to be finished and Sora is just sitting watching his opponent scoring in a row. With only 3 mins left now, it is 100 points for Yokohama and Sora is getting ready to get in.

Come back next week as for today that was all about the latest preview and updates of this Anime. By next week’s Wednesday, we will be back again will new updates of the upcoming episode. Next week will be bringing the episode finale of this Anime, you can officially watch Ahiru no Sora on Crunchyroll or HIDIVE