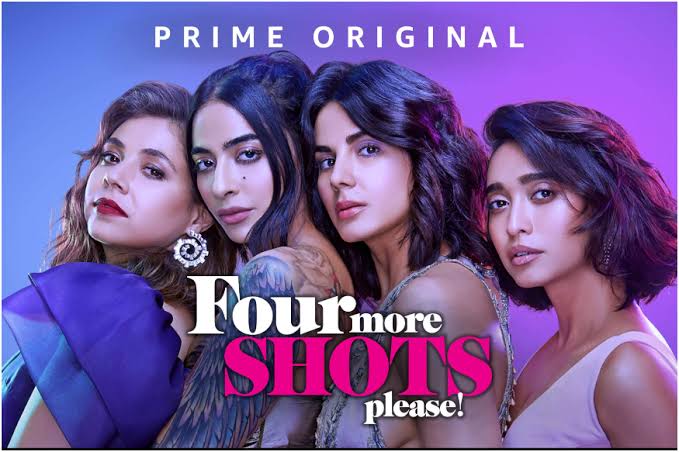 Four More Shots Please!, is the first women-centric Indian original rom-com web series by Amazon that has all the four protagonists female. Although the first season was criticized by the viewers as well as the critics in the first season, for showing pre-adult mentality and lack of trust towards its content, the show has been renewed for a second season to prove its worth. This season of the show is going to be the fourth original series from India in 2020. This article is going to make you acquainted with the update, cast, production, plot, and other details of the upcoming season. Keep reading to get informed further.

The official trailer of the show has not been dropped yet. Meanwhile, you can take a look at the first season’s trailer.

Four More Shots Please! Season 2 update: Where will it premiere?

Four More Shots Please! Season 2 will be released worldwide on April 17, 2020, on Amazon Prime. The show was announced back in June 2019, and its first look was dropped this year in January. It will premiere in three different languages, Hindi, Tamil, and Telugu. The show’s first season premiered on January 25, 2019, consisting of a total of ten episodes, with a runtime of 25 minutes per episode.

The second season will feature almost the same members who were present in the first season, along with some additional cast. The first season was led by Sayani Gupta as Damini Rizvi Roy ‘D’, Kirti Kulhari as Anjana Menon, Bani J as Umang Singh and Maanvi Gagroo as Siddhi Patel, who was assisted by Lisa Ray as Samara Kapoor,

The cast will also include Neil Bhoopalam as Varun Khanna, Milind Soman as Dr. Aamir Warsi, Ankur Rathee as Arjun Nair, Jiya Lakhiani as Arya Menon, Prateik Babbar as Jeh Wadia and Paras Tomar as Mohit Mehta in supporting roles. In this season, we will get to see Shibani Dandekar and Samir Kochhar joining the cast members paired opposite to each other.

Anoop Ram Kumar will be serving as the executive producer of this season, too, while Rangita Nandy will serve as a co-showrunner besides her sister, Ishita Nandy. While Anu Menon directed the first season, this time, Nupur Asthana has been assigned to lead the second season.

The writing part of the season will be done by both Devika Bhagat and Ishita Moitra. The show is produced under the Production House of Pritish Nandy Communications Ltd, which is owned by the father of Rangita Nandy and Ishita Nandy.

Four More Shots Please!, is the first women-centric Indian original rom-com web series by Amazon that has all the four protagonists female. The story revolves around four proudly-flawed women among whom two are in their early twenties while the other two are in their thirties, portrayed as the ones who can love, make mistakes and acknowledge them in order to understand the real meaning of life and friendship.

Damini Roy is shown as the flourishing journalist, Anjana Menon as a lawyer, Umang Singh as a Punjabi sports teacher and Sidhi Patel as a bubbly girl, who is still a virgin. Though their lives follow a different path from each other, they still do encourage each other and make them strong in their struggles.