The Ripper vs Rapper 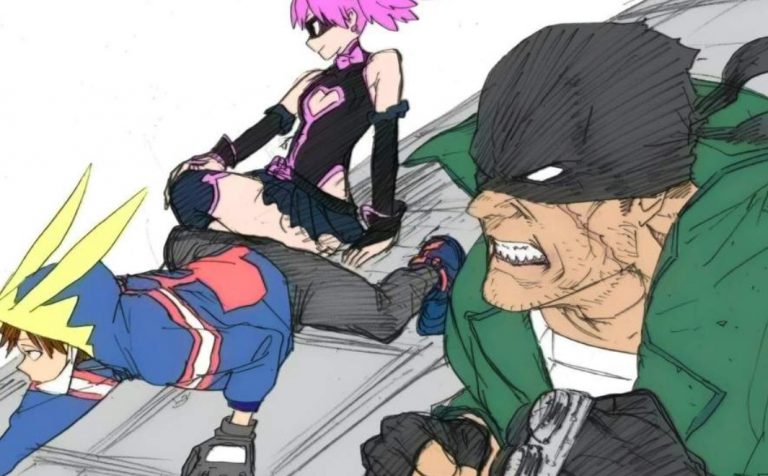 The battle between the Ripper and the Rapper continues as the Rapper attacks Iwao, under the disguise of the Ripper. The Rapper throws a barrage of punches using his Overclock. Iwao thinks about the Rapper said and how serious he is and he realizes that that rapper is going to attack him for real while being a knife. Despite that, both fighters decide to fight without the weapons and the Ripper took off his mask to fight freely. The mask was preventing him to use his Quirk because he couldn’t breathe well with his mask on.

The Rapper continues to attack him, and Iwao tries to find out how the Rapper fights by avoiding to fight him back while using his Quirk to avoid beating him. He finds out that the Rapper’s Quirk allows him to unleash a quick flurry of punches. Iwao pretends like the punched had knocked him out to create distance between them. He did that to get some time to breathe then he gets up and tries to fight like a street brawler.

This month we will be looking at  My Hero Academia Vigilantes Chapter 88 release date and recap. Let’s take a look at the Bio-monthly release schedule of this Manga below. After that, you can take a look at who will be defeated between the Ripper and the Rapper below.

Sometime later on the streets of Osaka, a young Fat Gum helps three girls from a Hero School. The girls are just lost and he gives them directions before he leaves. The girls thank him for helping them and they continue with their trip. One of the girls sensed something that she likes the most and she feels the battle that is taking place nearby. Her friends tried to stop her but she manages to escape and head towards where the battle is taking place.

Back to the Underground Masquerade, Iwao notices that the Rapper is so strong and he keeps on defending himself. The Rapper kept on unleashing different attacks towards him. Despite that, the Rapper has already wasted his attacks and energy it is becoming difficult for the Ripper Iwao to find an opening. The Ripper tries to use his Overclock Quirk but it is difficult for him to take down the Rapper. He then realizes that The Rapper and his Quirk are meant for the underground battle.

The Ripper decided to lose the fight and allow himself to be beaten by the Rapper. Since Iwao didn’t stand a chance he lost the fight on purpose. After the fight, the Ripper who defeated has been taken to a room where the injured fighters are taken to be healed. While he is there with other fighters like Drunk Lee and Master Beast. A member of the medical staff praises him for his fight despite his loss. The guy plants to give him something that will help him win his next fight. While Rumi Usagiyama arrives at the underground and wanted to fight for fun.