George Reddy is an upcoming biopic based on the real-life of a student leader, boxer, and Gold medalist, who influenced the politics of Andhra Pradesh state in Osmania University between 1967 and 1972. Moreover, he is remembered for inspiring revolutionary thoughts until he was brutally murdered at his hostel in 1972. The movie has been directed by B. Jeevan Reddy.

It has been produced by Appi Reddy, Sanjay Reddy, Damu Reddy, and Sudhakar Reddy Yakkanti. It has been written by B. Jeevan Reddy. The movie’shas already been revealed, and it will be coming to the theaters on 22 November 2019. The movie stars Sandeep Madhav as George Reddy, Shrinivas Pokale as Younger George Reddy, Satyadev Kancharana as Satya, Devika Daftardar as George Reddy’s Mother, Muskaan Khubchandani as Maya, Pawon Ramesh as Dastagiri (Giri), Manoj Nandam as Arjun, Thiruveer as Lalan. 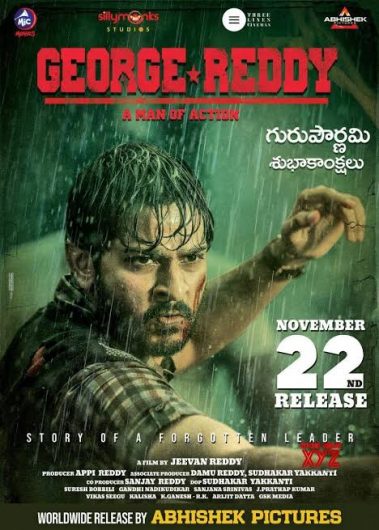 But it doesn’t end there as it also has Abhay Bethiganti as Rajanna, Bunny Abiran as Manipal Reddy, Laxman masala as Laxman, Yadamma Raju as Ram Nayak, Jagadeesh as Bheem Nayak and finally Sanjay Reddy as Professor. This movie had been awaited by many people, and it has caught the attention of Telugu states and managed to create curiosity among the youngsters. This movie will have a pre-release event very soon, and there will be a special guest present there.

It is non-other than Pawan Kalyan, who will be on the event that will be taking place on 17 November as the chief guest. Moreover, some reports suggest that Pawan liked the trailer immensely and wanted to extend his support to the film.