Uzumaki is one of the most popular horror manga out there. I’d say this isn’t a story everyone should read, but if you are into the Horror genre, then I know one thing for sure – Uzumaki isn’t something you should miss. Also, before starting with the review, please note that this post may contain a few spoilers from the Uzumaki manga, so if you dislike spoilers, then you may stop reading now. The horror series Uzumaki is written By- Junji Ito. That being said, the English Publishers for the manga are Viz media. The Original run for the series is 1998-1999, and it has been divided into 3 volumes.

Junji Ito is basically a household name at this point, and even people who are not into manga and anime have heard of him, thanks to the PT demo, and all that recognition and praise are well deserved. So an anime adaptation of Uzumaki is coming out in 2021, and I thought that I should review the manga.

I have high hopes for the anime, but I have to be cautious because of the absolute dumpster fire that the “Junji Ito Collection” was. Honestly, that anime was as bland as horror anime can get and was just a mere shell of what Junji’s mangas are. Just look at the difference…

I’m not a huge fan of horror anime, and that is simply because they are not at all scary. They are more like suspense thrillers and are not even remotely terrifying, and that shock factor of the violence wears off once you have seen more than 1 or 2 anime of that kind. It’s not like I’m saying that they are bad, the stories are pretty interesting, and watching them is fun. It’s just that they are not scary (There are some exceptions, though). But Uzumaki is, this manga genuinely made me uncomfortable.

Uzumaki is a mix of cosmic and body horror. If you don’t know, cosmic horror is the fear of the unknown and something grand. Something which is beyond our comprehension and is humans have no control over it. It is also known as Lovecraftian horror and is named after H.P. Lovecraft.

As for body horror, it is a subgenre of horror that intentionally showcases graphic or psychologically disturbing violations of the human body. These violations may manifest through aberrant sex, mutations, mutilation, zombification, gratuitous violence, disease, or unnatural movements of the body. And Junji is a master of body horror.

The thing about violence and gore is its impact is not as strong the second time around, and you become numb to it after a while, but Junji is a master of making you uncomfortable. There is beauty in his grotesque depiction of the human body. Each of his panels is crafted with such attention to detail that the more you look at it, the worse it gets.

In an interview, he said that it takes him at least 9 hours to draw something like this. And it shows. Also, it’s not just the art itself, the way he creates tension in his panels is just amazing. Usually, before a double-page, there is a panel that is a reaction shot, and it basically sets up the scare. Then you turn the page to reveal whatever monstrosity Junji has created. Also, the character design is kinda closer to realism. People look like humans, and it’s because of this, the impact is further amplified. The “scary” images stand out, and you truly get the sense that this really doesn’t belong in this world. 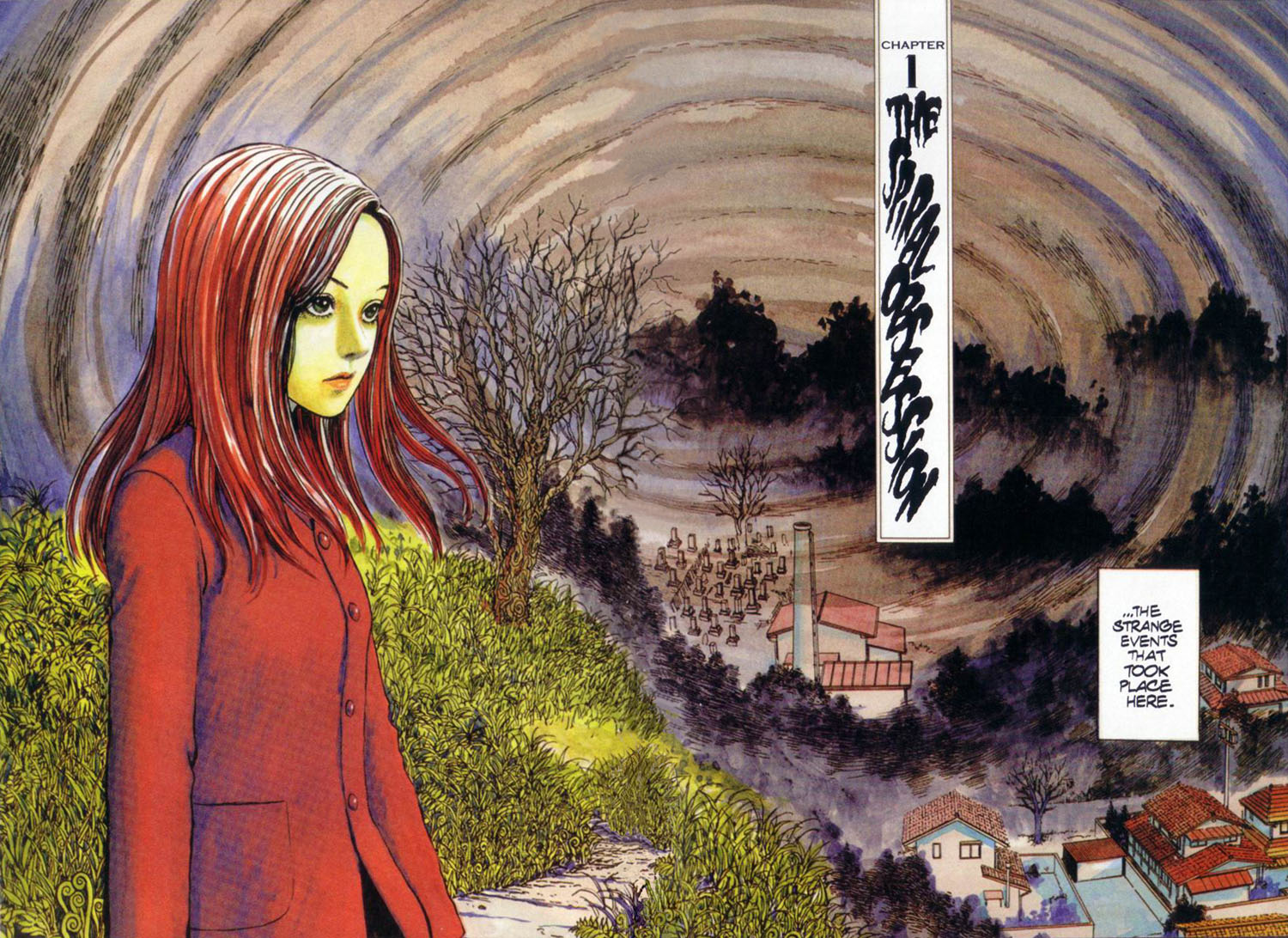 If you are wondering why I’m not talking about the plot and the characters. It is because they are nothing special and are just a tool to give you the scare. The writing and the plot are generic, to be honest. The story is set in a town that is cursed by the shape of a spiral, and in each chapter, you see how a person is affected by the shape of the spiral, and the story goes to some bizarre place, but at its core, it’s pretty simple.

The manga would be pretty average if the art and the execution weren’t so great, and these things elevate the story and make it feel like something grand. As for the characters, they are practically dummies. They are there just to be tortured by Junji, and it kind of goes well with the theme of cosmic horror, the characters are helpless, and there is nothing they can do to stop what is happening to them. It is something beyond their control.

So I highly recommend you read this manga, especially since an anime adaptation is coming out. Also, I suggest you get a physical copy of the manga if you want to enjoy it to its fullest. The deluxe edition is available on Amazon is relatively cheap, plus it also contains forewords by the author himself and an extra chapter.

Where to read Uzumaki manga?

All the chapters of Uzumaki manga are available on Viz. We highly condemn the usage of an illegal anime streaming website to watch anime or read manga. If you love reading Hardcopy, then it’s available on Amazon and other manga websites.