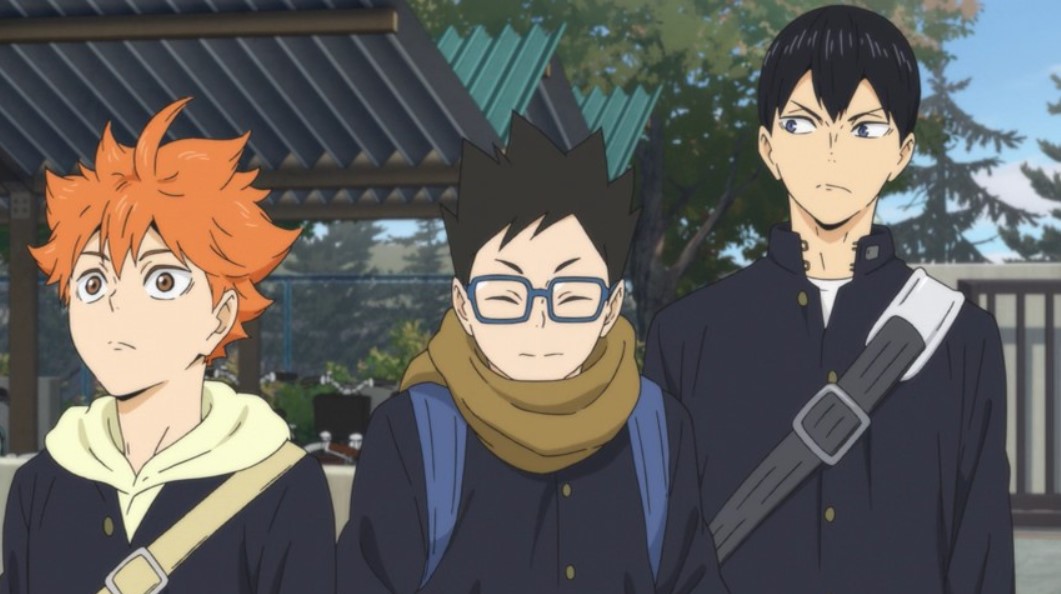 Karasumo had finally moved to the second round as Asahi had performed exceptionally for the team and ends the match with a finishing blow in the latest episode of Haikyuuu season 4. So in this post, we are going to talk about Haikyuu (To the Top) Season 4 Episode 12 spoilers. Again, let me remind you that this post will contain spoilers for the upcoming Haikyuu (To the Top) Season 4 episodes. So if you don’t want your anime experience spoiled, then it is best to stop reading at this point.

When is Haikyuu (To the Top) Season 4 Episode 12 update?

Haikyuu (To the Top) Season 4 Episode 12 will be released online on Saturday, 28 March 2020, at 1:25 AM JST. Note that the time is in Japanese standard time, so you might want to convert it to your local time if you want to get the episode immediately after its release.

Former Karasuno members appear to cheer on the new team and are impressed by the growth of their old teammates as well as the abilities of the first years. Kageyama, in particular, is attracting a great deal of attention for his superior technique and sharp game sense. Meanwhile, Atsumu Miya observes the match and finds Kageyama a completely different player. He also takes an interest in Hinata.

Tsubakihara perseveres and enters into a long rally with neither team willing to give up. Just when Tsubakihara seems to have broken through Karasuno’s defenses, Hinata manages to keep the ball in play by receiving it with his chest, and Asahi follows up with a spike to even the score 18-18. Hinata is still having trouble finding the right position to receive, but his improvements are becoming noticeable to his teammates. Moreover, it’s not just Hinata, the whole team has grown immensely.

Tsubakihara’s Himekawa is switched in as a pinch server at a crucial moment for Tsubakihara. Under pressure, Himekawa accidentally serves the ball into Teradomari’s head. This gives Karasuno the last point needed to win the set. The second set begins and eventually ends with Karasuno in the lead 15-14. Himekawa is switched in once again, but this time he successfully pulls off a ceiling serve, which sends the ball high into the ceiling by using an underhand serve. Daichi completely misses the ball because of the gymnasium lights, allowing Tsubakihara to regain some momentum.

Karasuno initially struggles with the service, but they soon adapt and halt Tsubakihara’s momentum. Karasuno refuses to be left behind as they gradually make their comeback. The game continues in an intense rally with both teams scoring back and forth. With the score at 23-23, Karasuno makes a miscoordination but Daichi saves it just in time to put his team at match point. For the last play, Sugawara joins the match as the pinch server, aiming to cause disarray in their opponent’s formation. Both teams are refusing to give in, keeping up a good rally. Maruyama spikes the ball and it ricochets off the blockers but Sugawara covers it. The match ends with a finishing blow from Karasuno’s ace, Asahi! Karasuno moves on to the second round!

If you happen to be curious as to what Haikyuu (To the Top) Season 4 Episode 12 will be bringing us, we have the episode’s preview, and you can check it on the video below.

For now, that is what the preview for Haikyuu (To the Top) Season 4 Episode 12 has revealed. For more details about the episode let us look at the spoilers below as they usually reveal much more information than a short preview. In the meantime, you can check other popular anime on our site as we always strive to bring you the latest news to date. As soon as the episode airs, we will also be bringing you updates so make sure to look for new content more frequently.

Hinata, together with Yamaguchi, runs into Hoshiumi and immediately enters into a staring competition. Kageyama appears to introduce him as Kourai Hoshiumi, a member of the National Training Youth Camp. Hoshiumi questions Hinata about his position, height, and highest reaching point. Eventually, Hoshiumi’s teammate comes to get him, and then leave to get ready for their match. Karasuno members watch Hoshiumi’s team, Kamomedai, and are amazed by his skill. Hoshiumi shows off his all-rounder prowess, leading the game commentators to call him the “Small Giant”. Hinata is inspired by Hoshiumi’s play and is glad they made it to nationals.