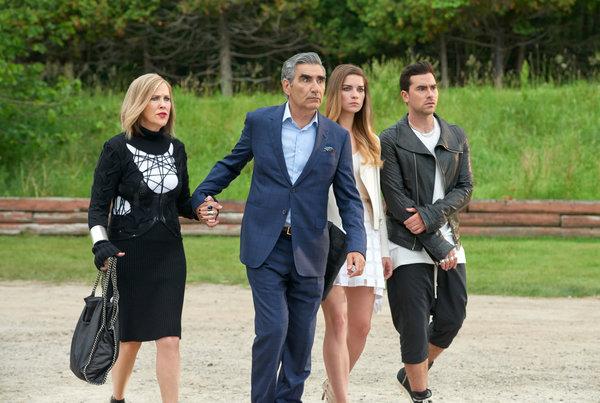 Schitt’s Creek, by many, has been touted as the biggest and the funniest TV shows ever. It is a Canadian sitcom that is a hit amongst the adults between the ages of 18-49. It is created by Eugene Levy and his son Daniel Levy. Schitt’s Schitt’ Creek premiered first on CBC on January 13′ 2015. The show was loved by one and all. It is produced on Not a Real Company Productions. The latest season of Schitt’s Schitt’s Creek Season 5, which is airing right now on Television. It is going to be a 14 episode Season. Season 5 began airing from January 8, 2019 and is currently on the fourth overall episode which will come out on. January 29, 2019.

The episode is titled as “The Dress,” and it will deal with Johnny who finds himself under immense pressure. Meanwhile, Moira’s very expensive red carpet wear, which is a gown, by the way, arrives. David in the background wants to take a road trip with Stevie. The episode will serve as the 56th overall episode of Schitt’s Creek. The next episode in line is called “Housewarming” and is due to air on February 5, 2019.

Moir Rose, if you ask me is the most interesting character of the show. She may be a series of tragic disasters, but nevertheless, she is going to bounce back, is my word. She’s all set to perform as an actress in Dr. Clara Mandrake film as a mutating Ornithologist. Her showbiz career on Schitt’s Creek has just taken off.

Season 5 of Schitt’s Creek focuses upon LGBT issues and topics. The riches-to-rags comedy is worth every second you spend with it. It is an exceptional show that after SCTV, for Eugene Levy has broken all records. I would call the show his career best. Schitt’s Creek premieres on CBC and CBC Gem streaming service every Tuesday.