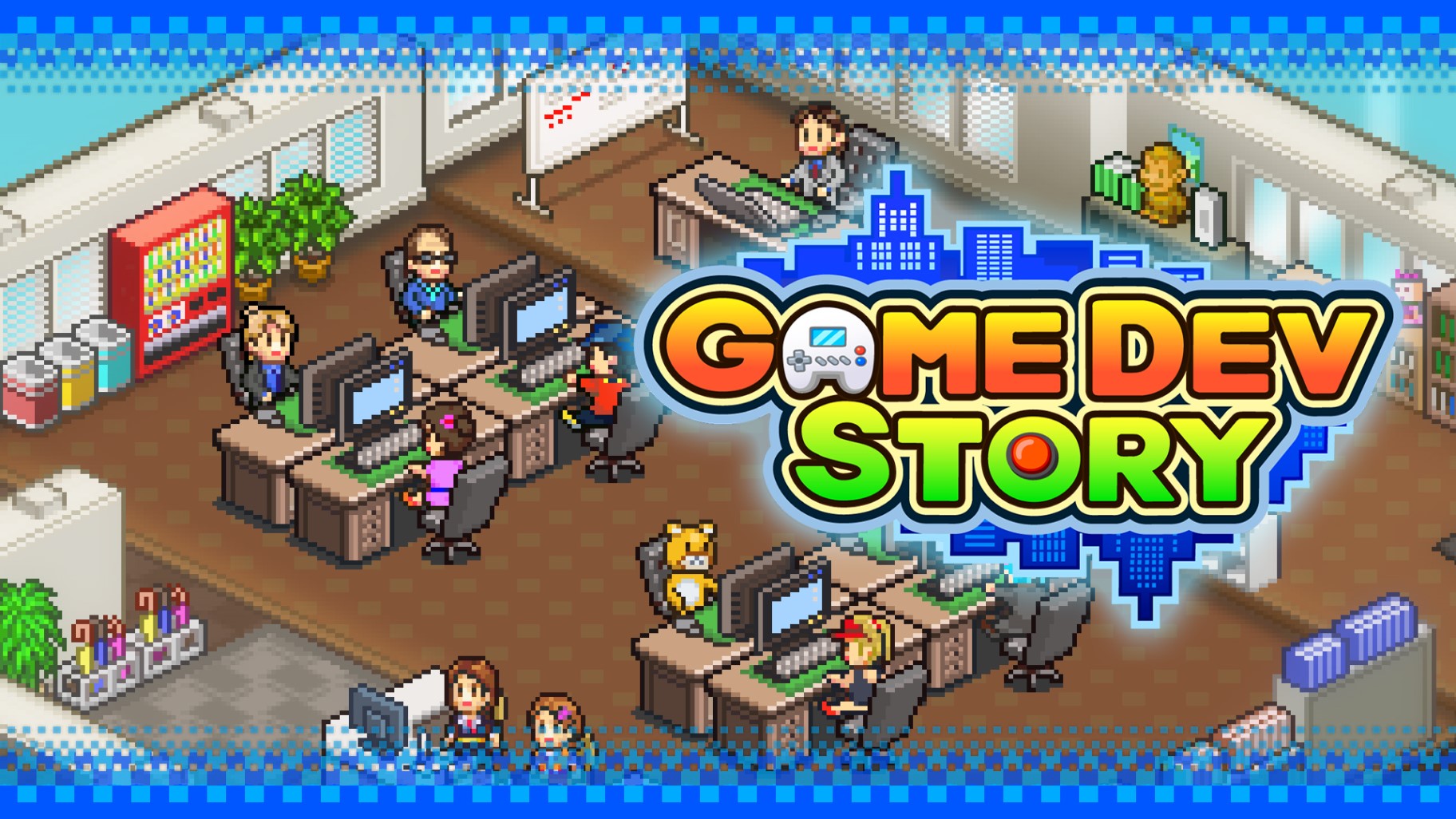 I was working with through the career that I had gone to college for, and I had an epiphany. One of those late-night, sweat-induced flashes of greatness that you can’t ignore. I was going to segue from my full-time career and become a Video Game Developer. I worked on several RPG Maker titles, even finished 5th in a contest offered by the developer, and started working on two mobile games; a basketball simulator and a full-fledged RPG. It was a trying time, as I poured hours of my time after work into making the dream a reality. It was 2012, and I realized I did not have the creative moxie to make my dream come true. Waning from the feeling of failure, a small app appeared in the iOS App Store; Game Dev Story, and I found a way to someone keep my dream alive.

It was a game that brought me some comfort and solace, as I moved on from my failed endeavor. I was thankful for the release because I was still able to pursue my dream, if only in a pseudo development company, as a mobile game, under the same moniker.

Kairosoft, the award-winning development team behind many mobile simulation games, has re-released Game Dev Story on the Apple Arcade this week, with the signifying + added to the title to differentiate something (still unsure as to what has changed). I religiously played this game as a paid app back when I first purchased it (released in 2010). I was so ecstatic to jump back in the fray but inevitably jumped in with some trepidation. Would this feel like it used to? Was I setting myself up for disappointment? Has anything changed, or is this simply a rehashed port of the 2010 game that I had already invested 100’s of hours in?

Despite the litany of questions I had, the premise of Game Dev Story+ is still the same as it was eleven years ago. You are the head of a startup game development studio and are charged with fostering a team of designers, programmers, artists, and musicians to create award-winning titles for various fabricated consoles. You can hire and fire team members, or improve their stats to make better games. The gameplay is straightforward and works on a timed basis, which covers how long titles take to produce and when new consoles release. 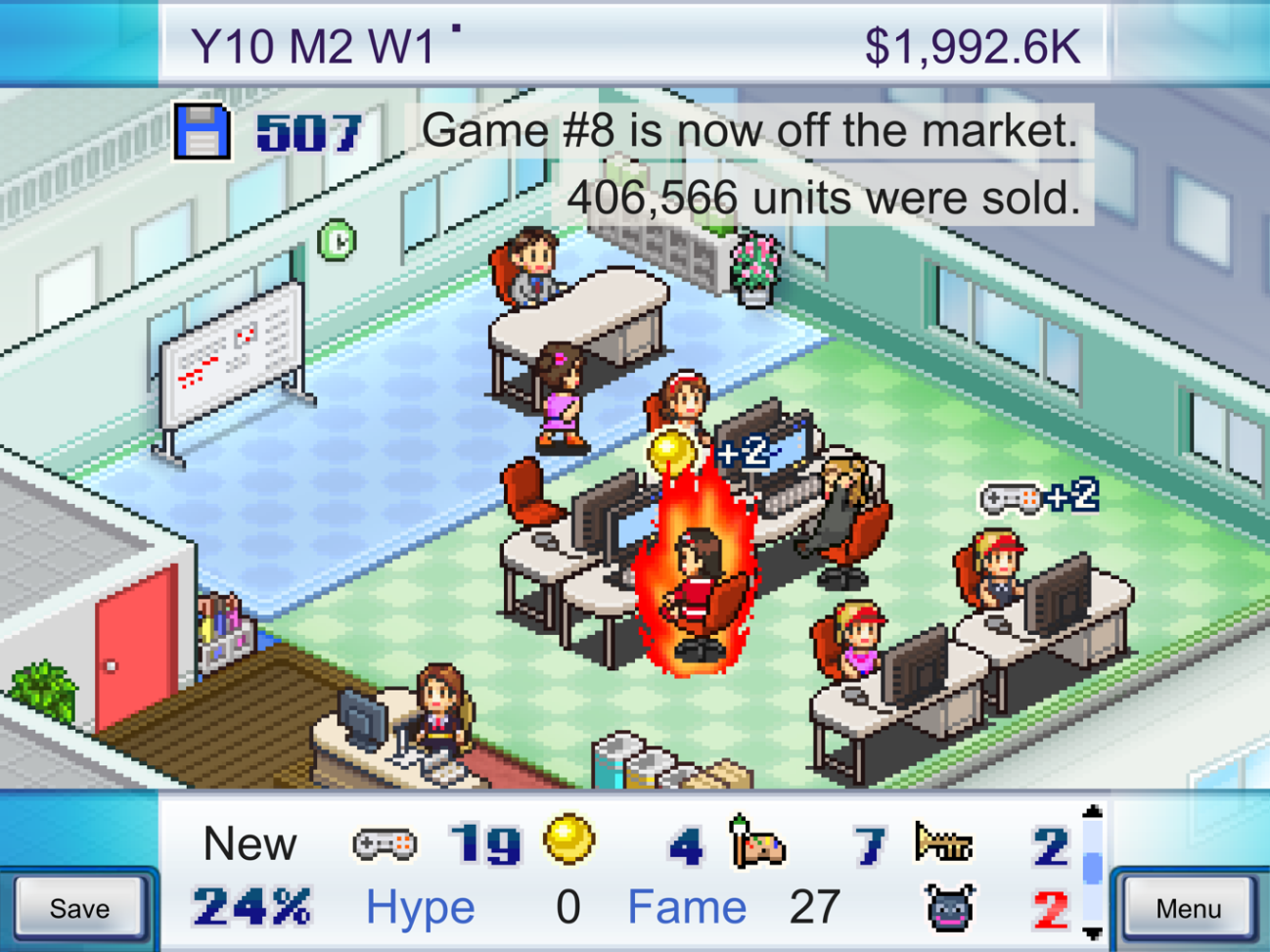 When one of your employees is doing well, they catch fire, and your game is better for it.

Your team is comprised of a colorful group of characters, with pseudonyms that are similar to real-life people, and each game is organized into four categories. To make a game you simply purchase the license from the console manufacturer, and select your Genre and Type. It is best to stay close to real-life game types, to maximize your sales. If you are hurting for cash, you can take a Contract job for an instant influx, but those are not sustainable as you lose fans by not putting games out, which will inevitably affect your future sales.

For every Racing Wrestling game my heart so desperately yearned to craft, I found that Ninja RPGs tend to do the best. One of my favorite companies as a kid was SquareSoft, and their RPGs, particularly on the Super Nintendo (SNES) forged my gaming pursuits for years. So naturally, when I booted this up, I sought out to make an RPG powerhouse, especially when the SNES console released. Although those are quite pricey to develop, I tend to hover towards those more than the others just due to my inherent fondness for the genre. However, if you need a solid starting point, making a Puzzle game is usually the cheapest way to get a game made if you have the license. 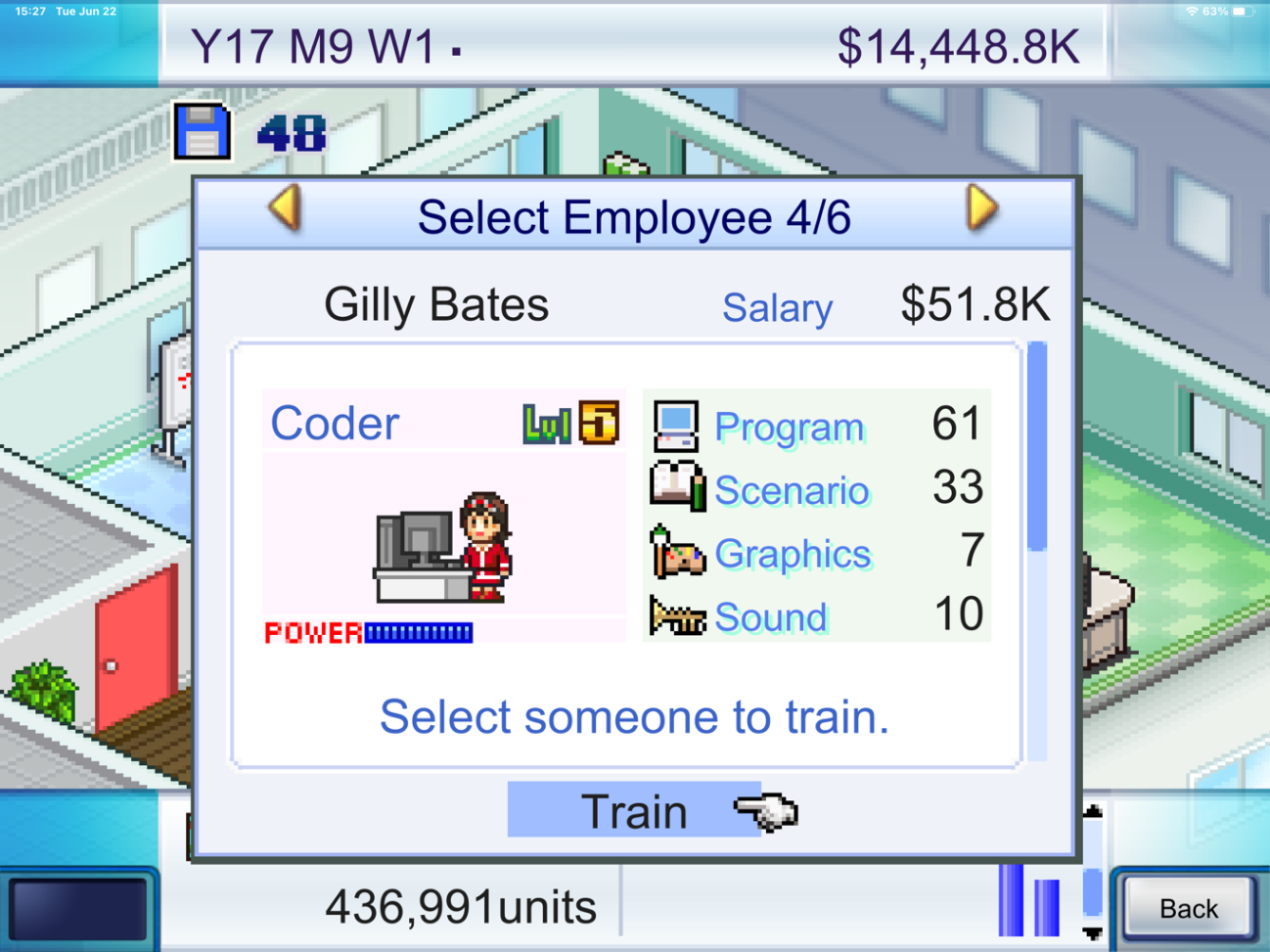 If only we had the creator of Microsoft, I could have salvaged my game development career.

The game is very straightforward, although maybe it’s just my senility, but I remember there being more of a tutorial for the game mechanics. I couldn’t find much, but once I clicked on the various menus, I remembered how to play and what to do. I felt for a fledgling Apple Arcade title, this should have had some added modes, features, or tutorials to walk new players through. Once more, this title was released with little information beforehand and seems somewhat slapped together. With most Apple Arcade releases, we have some preview or information prior to the launch, but I hopped in the App Store and saw that it had been released prior to receiving any notifications.

In 2010, I was on the verge of launching my own gaming company (N-Squared games, which ultimately did not launch), and I remembered buying this game as soon as it was available and becoming instantly hooked. Before I booted up Game Dev Story+, I scoured the internet looking for anything to help differentiate between this and the original, and found nothing to satiate my thirst for information. One subtle posting mentioned that there were quality of life updates and a few additions, but I have yet to find anything that is different or improved, and I actually feel like the original offering was much better than this one.

One of the most annoying things in this re-release is the in-game text. Each text box is not properly formatted, and often the last words of each line are shifted and are difficult to read. On the iPad, words like proposal are displayed as “propos” and the following line has “al”. With this being a text-heavy game, it greatly detracts from the experience as a whole. I feel like we are going to get more titles given the + designation, included in Apple Arcade. My hope is that with future releases, Apple with let us know what differentiates these from their App Store counterparts.  There were a few other smaller bugs like, during the Event screens, the only way to move past was to click the image in the middle, I could not hit the Back button, or select the down-facing carat that was blinking as if signifying me to select it. 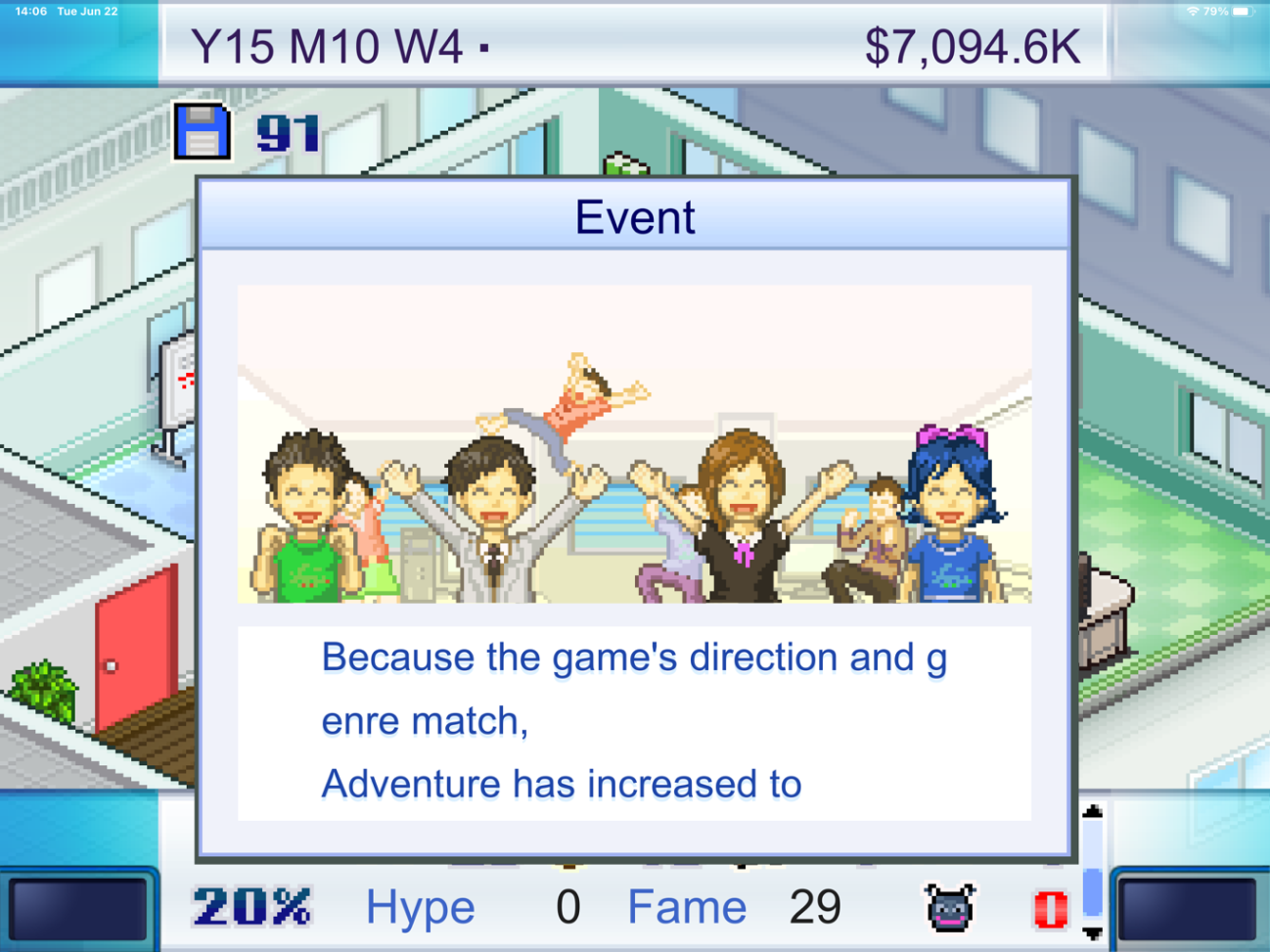 Text is randomly separated, and difficult to read.

As I reminisced on my early time with this game, I remember being able to purchase a console license when I need to, but in this most recent release, I found myself often being unable to purchase the contract for a new console. Perhaps that was my lack of planning, but I found myself fully missing console cycles (multiple cycles, in fact), and simply taking Contracts just to keep the lights on. I felt that if I spent time leveling up or trying to hire better employees, I further delayed my ability to purchase new console licenses. Yes, this is more aligned with real-life, but this is a simulation management game, and the inability to increase cash flow, or take out loans, or sell off ideas (perhaps this is where the Contract idea manifested from), greatly impacted my ability to be successful. I wish we had more control or input on the types of games, and feel like this was a missed opportunity with the + re-release on Apple Arcade.

I am not sure what it is about KairoSoft’s Game Dev Story+ that is such a draw for me. It could be the fondness of yesterday, the time in my life when I first started learning basic Java programming and writing copious amounts of dialogue for games I never published, but this game has always drawn me back. From the fabricated console titles to the whacky characters and game-type combinations, Game Dev Story+ takes me back, and for that, I am eternally grateful. If you have any interests at all in simulation, management, or game development, you owe it to yourself to give this an earnest try. Stay tuned to Otakukart News, for our upcoming Apple Arcade rankings, and see where Game Dev Story+ and other titles rank. Until then, I will be feverishly trying to purchase Nintendo’s most recent console license, to make my Pirate RPG dream come true.