Mobile games are on the rise, and many of them are extremely popular in different regions of the world; this includes Mobile Legends. Mobile Legends is a multiplayer online battle arena mobile game that is developed and published by Shanghai Moonton Technology. It is extremely popular in Southeast Asia and is going strong to this day. There are two opposing teams fight to reach and destroy the enemy’s base while defending their base for control of a path. 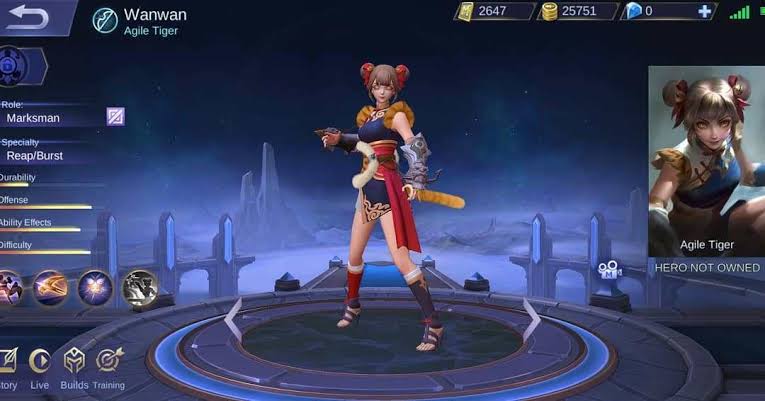 There are Legends in this game, which makes it even more amazing. Many Legends have made their way in the game, and one more is coming to the game, which is named WanWan. She is a Marksman who specializes in Reap/ Burst. As for here special abilities, there are pretty good, which reveals the Vital of enemy Heroes if hit by her hidden weapons. Moreover, if she hits all vitals of the target, she will be able to deal 25% damage to the target. Furthermore, she can move short distances when she throws a Sleeve Dart. The speed of this movement scales with the attack speed. As for her attacks, you can are as follows:

Wanwan throws a Swallow Dart in a designated direction, dealing 150 / 180 / 210 / 240 / 270 / 300 (+60% Total Physical Attack) Physical Damage to enemies along the path and triggering Tiger Pace. The Swallow Dart will transform into a Zone of Swallow Daggers at its destination. Lasts 5s.

Wanwan activates her crossbow and shoots arrows to enemies whose Vitals are all hit by her for ten-time(s). (Will shot one more time for every 40% extra Attack Speed). Each arrow deals 60 / 72 / 84 (+50% Total Physical Attack) Physical Damage, and the last arrow will deal Crit Damage and trigger Tiger Pace.
Crossbow of Tang can only be cast to enemies whose all vitals are hit.

Theof this hero has been revealed will be arriving in the game on 26 November 2019.

Expendables 4: What Is The Official Status?