Rugal dropped its 9th episode this week and we got to see what unfolded with Hwang Deuk Gu, and where he headed to in the second half. In this week, we will be able to learn more about Kang Ki Beom battling with his own cybernetic eyes, and how he manages to mitigate this crisis.

Rugal is about a team of cybernetic soldiers who wish to defeat their enemy, which is an evil organization called Argos. The Choi Jin Hyuk starrer made its debut on March 28, 2020, to positive reception from fans.

Rugal’s cast is star-studded with Choi Jin Hyuk (The Heirs, Justice), Park Sung Woong (Bridal Mask, Remember), and Do Dong Hyuk (The Last Empress, Love Affairs in the Afternoon) in the lead roles. Park Sun Ho (Produce X 101, Best Chicken) is also a part of the cast. Kang Chul Woo (My Secret Romance) is serving as the director of the show, and the scriptwriter is  Do Hyun, who is writing the show based on Rel .mae’s webtoon which Rugal is adapted from.

In this article, we will take a look at what’s coming in episode 10 of Rugal as well as details regarding its official streaming.

In the previous episode, we saw Rugal tried to cover up its stomach to defeat Hwang Deuk Gu (Park Sung Woong) and Argos. Their advanced teamwork heralds a more exciting second act. As Kang Ki Beom (Choi Jin Hyuk) was rushing to catch Hwang Deuk Gu and Argos, Hwang Deok Gu’s wickedness was also ruthless. Deuk Gu Hwang created a new version of the experiment and caused a human bombing in the middle of the city. People began to tremble in fear of an unknown reason, and the terrible scene of terror also shocked Rugal.

However, Hwang Deuk Gu’s brutality did not end there. Corpses were scattered all over the city, and Rugal, who was dispatched to the scene, faced a shocking sight. The sign on the corpse’s neck had the phrase “The killer of the killers, Kang Ki Bum killed me.”

At that moment, Kang Ki Beom’s artificial eyes started malfunctioning. An image of Kang Ki Beom, looking down at the dead wife’s body in a cold way, appeared to him, and this vision caused him a lot of trauma.

The released photos from the upcoming episode show the appearance of Rugal’s team in a new operation to fight the deteriorating Hwang Deuk Gu. 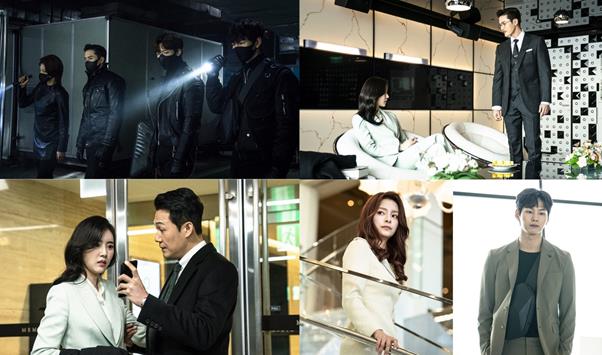 You can catch the show with English subtitles only on Netflix, as Rugal is streaming exclusively on the platform.