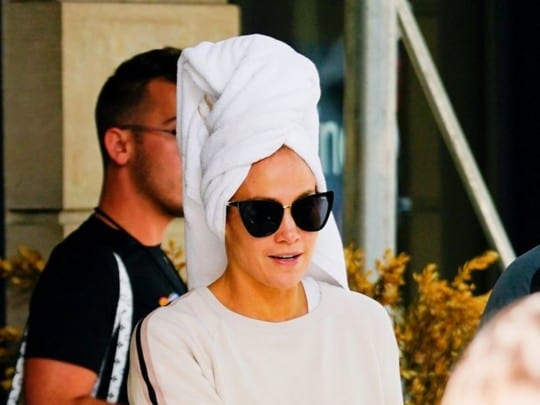 En route to a concert in NYC, Jennifer Lopez wore a towel to her head on Monday. The pop star was seen stepping out of her building in NYC after her concert got canceled due to a power outage. Then the concert had to be rescheduled for Monday, later. Lopez kept it casual with an off-white sweatsuit that sported black and pink stripes down the sides, on her way to Madison Square Garden.

She seemed to be mid routine as she dried her hair on the go, sporting a white towel wrapped tight and high on her head. It seemed like Lopez was mode routine, getting ready for the show before it got canceled. As she headed out, Lopez was seen in beige flip flops and huge cat-eyed sunglasses. Before she got into her silver Escalada, Lopez waved at her fans outside the Madison Square Park building. Lopez might have dried her hair on the go.

“The Love Don’t Cost A Thing” artist was a mid-performance on Saturday night, suddenly when the whole of NYC suffered a major power blackout. Jennifer promised her fans on her Instagram apologizing for the mishap and promised that her team would reschedule the show. This came at a time when the venue was entirely the sold-out and was being evacuated.

The megastar added that she obviously is heartbroken and devastated and she’s very sad. She said her love you to the fans because all of this happened in the middle of the moment.