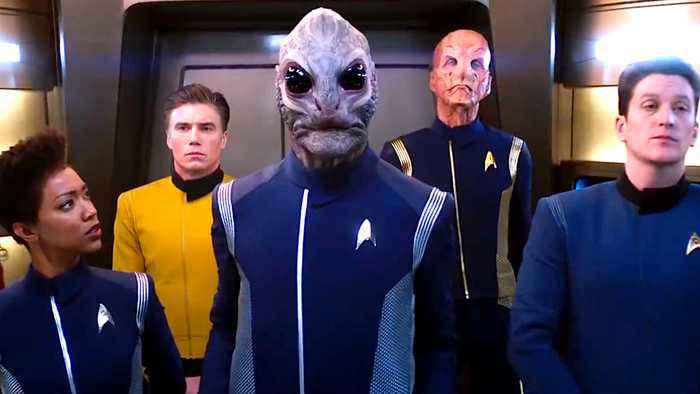 CBS and Netflix UK/Ireland revealed the promo for Star Trek Discovery Season 2, and if you have a curious eye, you will see details of USS Enterprise, hidden in the background. Mostly this trailer is about USS Discovery’s battle against the villainous “Red Angel.” If you look more closely, you will see that the featurette is actually taken on the Discovery’s bridge. Facebook shows a slightly different version of the featurette which specifically mentions stuff about the Enterprise on display. Here watch it below:

It is very clear from the beginning of this promo that fans will get to see a lot more of Spock in Season 2 of Star Trek Discovery. Ethan Peck has joined the cast of Star Trek to play a younger version of Spock (who is half-brother to the disgraced Starfleet officer Michael Burnham). If you must have observed, young Spock looks just the same (he does have same eyebrows and ears), but he’s bearded this time around.

Young Spock gives us a warning at the very beginning about him having a vision of an apocalypse and that there’s an evil force working to destroy everything of the sentient life in the galaxy. Next, we see Captain Christopher Pike explaining that the seven mysterious red bursts are signs that “typically follow the arrival of a being we call the Red Angel.”

So naturally, rest of the cast are looking deep into who this “Red Angel” actually is. Now a member of the secretive United Federation of Planets outfit, Captain Philippa Georgiou is shown trying hard to decipher mysteries of the “Red Angel.”

Coming to the last bit, though Dr. Hugh Culber (played by Wilson Cruz) was killed off last Season of Star Trek Discovery. Showrunner Aaron Harberts revealed a long time ago that it wasn’t over for Hugh Culber and that it was just the beginning of the first chapter to Hugh’s story. Also, the actor himself revealed he would be returning to Season 2. Star Trek: Discovery Season 2 returns to CBS All Access on January 17, 2019.