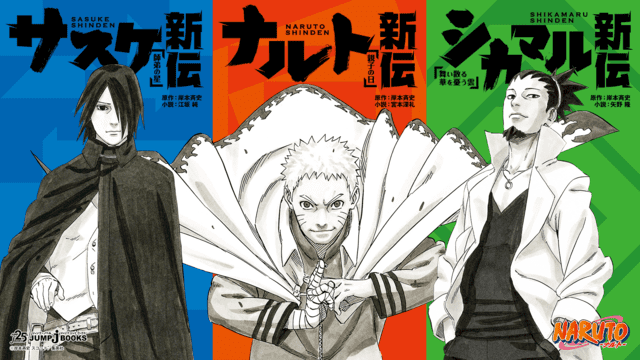 Naruto Shinden, a light novel that features Naruto and his friends in their parenthood adventure, is announced to have a TV anime adaptation next month. The anime adaptation might be scheduled in the same schedule for Boruto. It is expected that the two other accompanying light novels are going to be animated as well next month.

The latest issue of Weekly Shonen Jump announced that Naruto Shinden, the light novel that was written by Mirei Miyamoto would be having a special TV anime adaptation in February. According to Anime News Network, the anime will be broadcasted for three weeks, which means three episodes in total. The airing will start on February 10 and might be replacing the anime for three weeks (as Boruto also airs on Sundays). This is still not confirmed, but with the Mitsuki Arc wrapping things up, this option is possible.

Naruto Shinden was first introduced in 2015 with a light novel featuring two installments, the Itachi Shinden (about Itachi’s life as a shinobi and his relationship with Shisui) and the Sasuke Shiden (which is a story about Sasuke’s travels to know more about Kaguya Otsutsuki). Both have been adapted into anime series from 2016 to 2017.

A new iteration of Naruto Shinden light novels we’re shipped from May to July last year to celebrate the 25th anniversary of Shueisha Jump.

The Naruto Shinden 2018 was supposed to be the bridge between Naruto and Boruto series, but the Shinden ended up being about Naruto and his friends tackling the problems of parenthood. The 2018 installment has three Shinden light novel: Naruto Shinden, Sasuke Shinden, and Shikamaru Shinden. Each book tells the struggles of the titular characters as they raise their children. Also in this iteration of Shinden series, the light novel Konoha Shinden: Steam Ninja Scrolls are added as the first book. Steam Ninja Scrolls was released in 2016 and is a story about Mirai, Guy, and Kakashi 15 years after the Fourth Shinobi War.