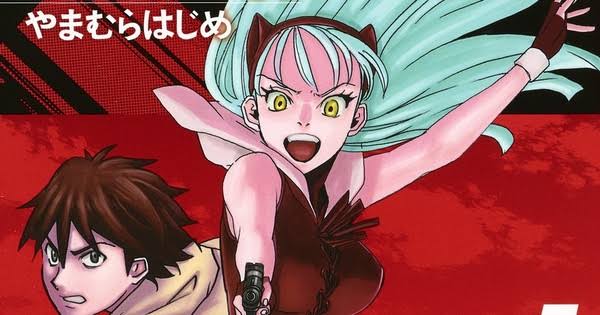 Hajime Yamamura launched his manga Seven Edge in Shueisha’s Garaku.mag magazine in April 2015. The manga was continued on Shueisha’s Garaku no Mori website after the magazine Garaku. Mag ceased its publication in August 2015. The third compiled book volume was published by Shueisha in July 2018.

This gun action manga is about a young man who belongs to an extremist organization that plots to assassinate politicians — a perfect genre for people who are into Action and Seinen.

Yamamura Hajime also launched a new manga titled Shikkoku no Ziggy, aka Jet Black Jiggy in Shogakukan’s Monthly Sunday GX magazine on September 19, which have the story about a post-apocalyptic world overrun by violence, fear, and even killing. The story starts with two women who were consumed by revenge appear in Ultima Castle, the world’s last city.

Hime Yadori was also lunched by Yamamura in Monthly Sunday GX in August 2017. The fifth volume was published by Shogakukan in July 2019. Yamamura’s Kamisama Dolls manga, which was ended in 2013, was soon adapted in a 13-episode anime series that aired from July to September 2011. Karisma Dolls was streamed by Crunchyroll in various countries at the same time as Japan.