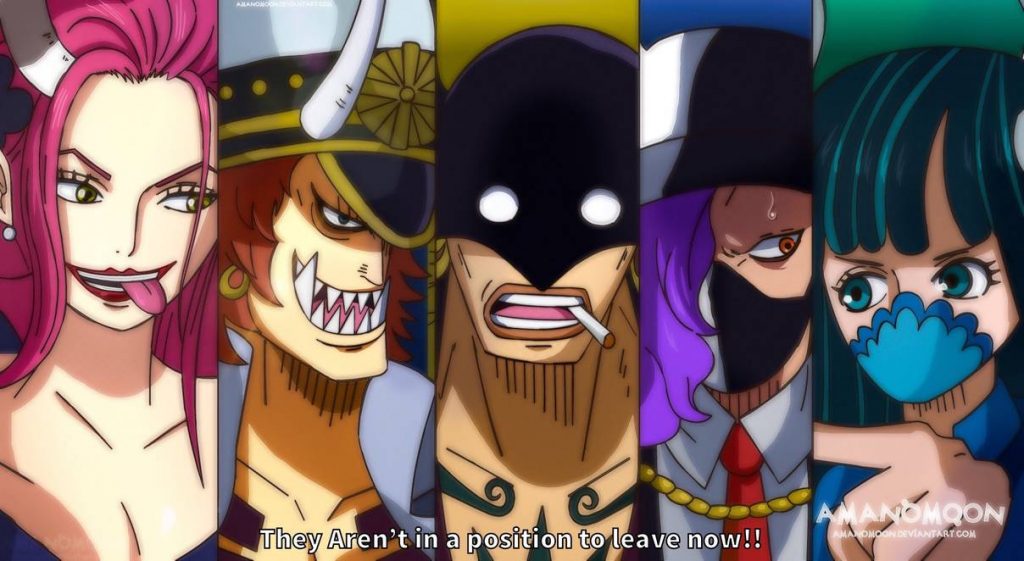 The previous week’s One Piece Chapter 978 was indeed amazing, and it revealed much important information related to Onigashima, and this week we have early spoilers for One Piece 979, which you can read below.

We will see Strawhats and Kidd Pirates infiltrating Kaido’s mansion, and on the other hand, we will see the Flying Six looking for Kaido’s son, and only if they find him, then they can challenge the calamities. We have partial spoilers below, which we will be updating as soon as we have more information on them.

– Once the Flying Six manages to find Kaidos, son, they get the chance to challenge the calamities.

– The challenge is supposed to be demonstrated in front of Big Mom. That is the reason why Kaido
gathered them to meet big mom.

– If one of Flying Six win against the calamities, they can replace the respective All-Star

– Kanjuro is flying towards Hiyori instead of Onigashima

– Korean blog that originally posted the spoilers have confirmed KAIDO’S SON has NOT REVEALED THIS CHAPTER, but his name is mentioned, supposedly “Yamato.”

– King’s dialogue in the scan-

– King: Even if I summoned you all to gather, there are some of you who wouldn’t heed my call.

– King: All of your ex-pirate captains are gunning for our “All-Star” seats (note: the text is cut off, but I’m guessing he’s saying something like this)

– About King, he believes that Who’s Who and Sasaki would not have come to the party in Onigashima if King himself had summoned them.

The spoilers for One Piece Chapter 979 were provided by Sandman. The One Piece 979 Raw spoilers are somewhat confirmed, we will share more details as we have it.

When Is One Piece Chapter 979 update?

One Piece 979 will be released officially on Viz Media on May 10, 2020. However, One Piece 979 Spoilers are out early, which we have added above, we will share more details as we have it.