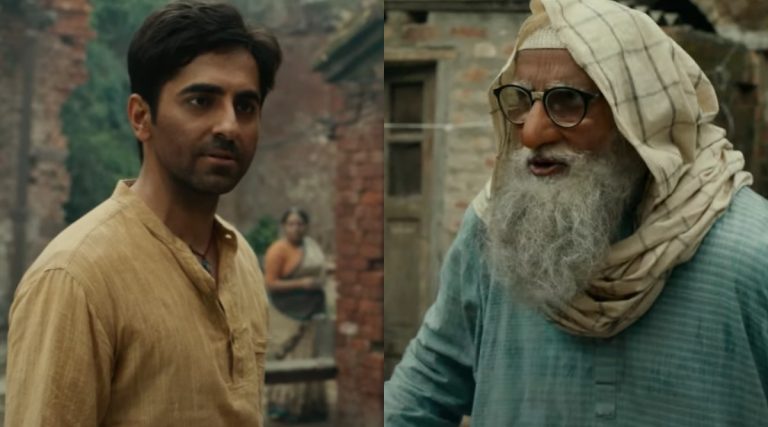 In this article, we will discuss the Film Review of Gulabo Sitabo, Amitabh Bachchan, and Ayushmann Khurrana starer Hindi-language comedy-drama Gulabo Sitabo were released 12th June 2020. The film was directed by Shoojit Sircar, produced by Ronnie Lahiri and Sheel Kumar, and was written by Juhi Chaturvedi. Set in Lucknow the film follows the story of Chunnan ‘Mirza’ Nawab (Amitabh Bachchan) who is a cheap old man who is viewed as a greedy old man who lives with his wife Chunnan ‘Mirza’ Nawab (Amitabh Bachchan). Fatima is the owner of a run-down mansion in Lucknow whose rooms are rented out by various occupants.

Many of them do not even pay proper rent. Once Begum leaves Mirza with the responsibility of accommodating the property, Mirza cannot wait to see his wife Begum die soon so that he can possess the mansion all by himself. Then there comes Baankey Rastogi (Ayushmann Khurrana) who also stays in the Bungalow with his mother and his 3 sisters and is a poor resident of the mansion. Baankey Rastogi works in a small wheat mill shop all though he is happy with pretty much everything in his life he struggles to raise money for the rent, which has been delayed for months and now Mirza nags at him to pay his dues whenever they cross paths.

These things lead Baankey to get irritated with Mirza and out of anger eruption he kicks down a wall in toilet blocks which falls immediately and which makes Mirza angry and now he wants Baankey to pay the full cost of repairing the broken wall. This is the last straw for Baankey who now swears that he will take revenge against Mirza in any way possible. His wish soon comes true as he meets a geologist named Gyanesh Shukla (Vijay Raaz) working for the Government who realizes the value of the mansion and decides to seize it from Mirza. He soon declares the site as a government-owned heritage site and he informs Baankey that an alternative housing complex and some money will be provided for those evicted. As Baankey was planning revenge against Mirza so decides to help Ganesh.

But soon Mirza comes to know about all the plans of Baankey and others and consult a local lawyer named Christopher Clark (Brijendra Kala). He wants all the Mansion ownership to get assigned to him as soon as the Begum dies. He plans to remove all the tenants and keep the whole mansion for himself. So the lawyer makes a copy document and instructs Mirza to get it to sign or get a right-hand fingerprint of the Begum. Unfortunately, Mirza fails and gets the fingerprint of the wrong hand and so the plan fails instead. Seeing Mirza in despair the lawyer introduces him to Munmun a wealthy contractor who plans to demolish the mansion and build a new housing complex on it. He also promises Mirza a large sum of money and a complex. So Mirza agrees with the plan of Munmun.

Soon Begum comes to know about the whole situation that Baankey and Mirza are planning to get benefit from the land by helping their respective parties by destroying it. She believes that the land has been owned by their family from generations and she will not allow anyone to get even a piece of the land. So she plans to divorce Mirza and run away with her lover.

Next in the climax, we witnessed that Ganesh’s claim alternative housing for Baankey and the other tenants were false and as soon as Ganesh brings a couple of man with himself to announce that the mansion is a government-owned heritage site now Baankey and rest of the tenants feel outraged and soon the fight starts. In the meantime, Mirza comes to know that his Begum has run away with her lover as a secret plan to laid waste to Mirza’s Plan for the Mansion. So later Mirza and Baankey both moved out and becomes depressed and subdued. This is worsened by them remaining shut out, and when Begum returns again to the mansion to rejoice her 95th birthday.

Begum left behind an ancient chair for Mirza, Mirza says to Baankey that he sold it nearby for 250 rupees. Then in the closing moments of the film we see the same chair which Mirza sold in the Antique shop priced at 135,000 rupees. Mirza was so shallow minded and petty that he did not recognize that the value of that single chair would have been sufficient to resolve all his troubles.

The Review of the film Gulabo Sitabo has been decent though it does not hold very high IMDb ratings still we see around 86 percent approval rating from the audiences. So as it stands as of now the films hold a 6.6/10 in IMDb. Here are some Reviews from the Critics

The Gulabo Sitabo film was released on 12th June 2020 on Amazon Prime and it features the following Cast in the film.