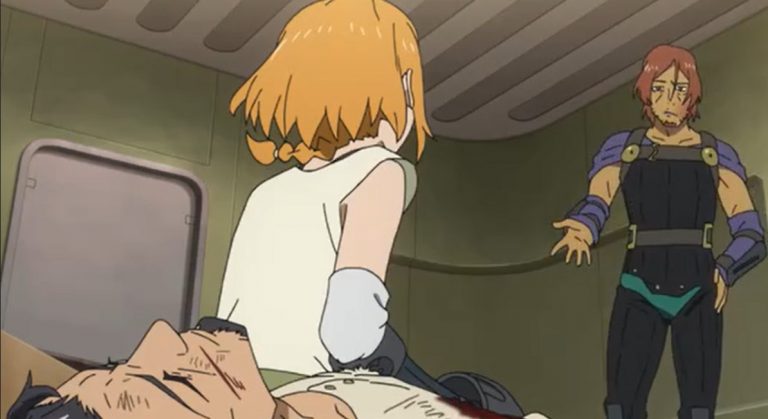 Let’s see what episode finale of this Anime has to offer for us here. Natsume is shocked after witnessing that Kaburagi is stabbed by Hugin in front of her. Hugin told her that she won’t escape too and the world must be rid of bugs. Suddenly a new monster arrives and in another world, they notice that. The commander said that there is no escaping GGS. One of the soldiers also discovers that the Gadol has no identification number.

It does not even have a control chip and the commander orders that they must concurrently activate Decadence. Meanwhile, Natsume clashes with Hugin after she throws a few punches to him. He held her high by her neck telling her that she is a lowly bug. Hugin got shot from a distance by Kaburagi’s future body from another world. He took Natsume who is conscious of safety and he tried to wake her up.

This week’s post is about Deca-Dence Episode 12 release date, preview, and spoilers. Things are getting tensed at Decadence lets see what will happen to the villain Hugin and Kaburagi below. First, take a look at the details that follow down her then move to the updates.

Deca-Dence Episode 12 will be released on Wednesday, 23 September 2020, at 11:30 PM JST. This is the final episode of the season lets take a look at what the latest development has to offer for down here.

Natsume wakes up and punches Kaburagi thinking that she is still fighting with Hugin. Another body of Kaburagi is lying down and Natsume tries to wake him up saying ”Boss.” The future Kaburagi replied yes and she is asking him why is he here and he said it’s me Kaburagi. He told her that the one lying down is an avatar and he reminds her what he said about the world being manufactured.

Natsume now understands what the real Kaburagi is talking about as when she punched his face it got red to prove that he is the real one. They both went out to fight with the last Gadoll that manages to survive and he then figures out that it is the one that got spawned. Kaburagi, Natsume, and the commander’s crew clash with the Gadol. After a long battle, the Gadol evolve and manages to land a powerful blast to another world where the cyborgs live.

The commander told the cyborg Kaburagi that Decadence will be shut down. Meanwhile, the real Kaburagi talks with Jill in a form of a cyborg who said they will still have Decadence. They are talking using a communicator and she reveals that they manage to restore the communication. Jill explains everything about Decadence to Kaburagi and the commander Minato through the communicator. After she told them everything the real Kaburagi decided that he will log in to Decadence to finish his business.

Kaburagi orders Jill to make it happen and Natsume agrees with him. Kaburagi enters the Decadence in a form of a mini cyborg. Meanwhile, Natsume manages to take down the Gadol and met with Jill and other cyborgs. Jill reveals that she and other cyborgs are Kaburagi’s comrades. Kabu and Minato in a form of mini cyborgs they activate the Decadence to save everyone. Kaburagi got his body connected to the engine for Decadence to be activated.

For this month that what we manage to get for you about the latest development of Deca-Dence and the preview up above. We will come back again with another latest updates only if the Anime returns for another season. You can access this Anime officially on decadence-anime.com