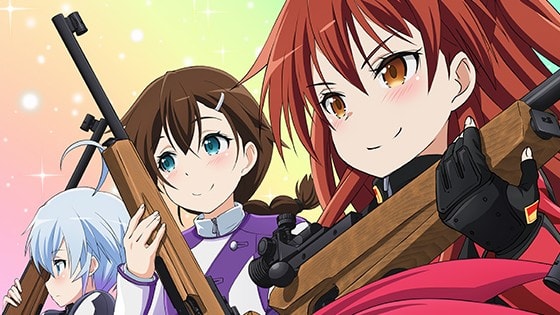 Rifle is Beautiful is a 4-panel Japanese manga series that has been serialized online via Shueisha’ Tonari no Young Jump website since April 2015. The adoption was initially announced a year back on October 18, 2018, on the 46th issue of Weekly Young Jump. The studios 3HZ adapted it into an animated series premiering from October 13, 2019, on Tokyo MX, KBS, SUN, and BS11.

The show isn’t as popular yet, but it has made quite a few fans due to its fun and pleasant story. Definitely a show you would enjoy if you are just looking for some light-hearted fun and Kawai scenes. The characters are actually quite likable. Character development varying from cute air headed maid to some super serious personality sure gives the show a wide spectrum.

The series apparently will have 12 episodes in total with no news of the next season as of yet, but let’s be hopeful. Episode 6 was as cute and entertaining as we could have expected, moving on to the streaming details.

Where To Stream Rifle Is Beautiful Episode 7?

Episode 7, named “Studying is Hard,” will be coming out very soon. You can stream it on your favorite streaming services such as Crunchyroll and FUNimation.We expect nothing less than a fun and sweet episode to take all of your stress away. I hope you enjoy the new episode as much as we’ll do.