Blonde, a fictional biography, was released on September 28, 2022, and is streaming on Netflix. It is directed and written by Andrew Dominik and is based on the novel of the same title written by Joyce Carol Oates that came out in 2000. The film focuses on the life and career of the famous American actress Marilyn Monroe. The major parts of the film are presented in black and white, while others are in color. Through the film, the life of Marilyn Monroe is fictionally presented to the audience.

Before being released on Netflix, a two-part miniseries based on the novel was also released in 2001. Development of the film started long back in 2010, but its production began in 2019. Chief producers of the movie were Dede Gardner and Jeremy Kleiner. The production wrapped up in July 2021, with the pandemic delaying the process. The film was controversial because of its sexual content and ‘Blonde’ being the first NC-17-rated film to be released on a streaming platform.

The cast of the film is explained below:

Ana De Armas as Norma Jeane (Marilyn Monroe) – The Cuban actress Ana worked hard to fully inhabit the role of Marilyn Monroe. She spent around 3 hours in the makeup studio before the shoot to look like Monroe.  She also took classes to impersonate Monroe’s breathy vocals. The result of her hard work is evident in the film.

Adrien Brody as The Playwright (Arthur Miller) – The heartbreaking relationship of Monroe with her third husband, Arthur, is presented very well, and the emotions can be felt by the audience. Their marriage lasted 5 years but played an important part in Marilyn’s life. Bobby Canavale as the Ex-Athlete (Joe DiMaggio)- Joe DiMaggio was Norma’s second husband.  Although their marriage lasted only 9 months, they continued to remain friends even after. Joe was even by her side during her final years.

Xavier Samuels as Charles Spencer Jr.- The role of Cass Chaplin, Marilyn’s alleged lover, and friend, is brought to life by Samuels. Charles spencer was an American actor and the older son of Charlie Chaplin. Julianne Nicholson as Gladys Pearl Baker- Norma’s relationship with her mother, Gladys, was different from any normal mother-daughter relationship.  Norma’s mother disliked her because she believed Norma was the reason why his husband left him. Julianne skillfully pulls off the character of Gladys.

Sara Paxton as Miss Flynn- Jess Flynn was Gladys’s friend who gave occasional vocal lessons to Norma Jeane. Jess Flynn played an important part in Norma’s childhood. Caspar Phillipson as John f. Kennedy- One of the many reasons that Marilyn Monroe was so popular was that she sang Happy Birthday to the then president John F. Kennedy. They were also rumored to have an affair, as shown in the film. The other supporting actors besides Ana De Armas and Brody include Lucy De Vito and Garret Dillahunt.

Norma Jeane had a rough childhood. She was raised by her mother until she was 7 but then sent to an orphanage after her mother was declared mentally unstable to raise a child. On Norma’s 7th birthday, Gladys drives her up to Hollywood Hills, which she claims is the place where Norma’s father lives. But when a fire breaks out there, they are sent back to their home, where Gladys tries to drown Norma but gives up. Norma runs to her neighbor Miss Flynn for help, who consoles her, saying that everything will be alright.

Since the 1940s, Norma has been known by the name Marilyn Monroe professionally. She became a pin-up girl and started appearing on Magazine covers and calendars. She faced many difficulties entering the entertainment industry. While her acting career was in the making, she met Charles Chaplin Jr. and Eddy Robinson Jr. The three were rumored to have a polyamorous relationship. Norma’s big break was with ‘Niagara’ in 1953.

But after being found in public with Charles and Eddy, she was advised to avoid being seen with them in public.  She became pregnant with Charles’ child. She was very much delighted to conceive but was scared that the child might inherit Gladys’s mental illness and, therefore, decided to abort. She even changed her mind on the day of the abortion, but it was too late.

After losing the baby, she cut off all ties with Charles and Eddy. She met Joe DiMaggio, with whom she discussed her plans to leave Hollywood and work in New York. Shortly after, Joe asks her to marry him, which she accepts. Their marriage didn’t last long because of Joe’s violent behavior. She divorces him because of that.

After auditioning for Arthur Miller’s play Magda in 1955, Norma and Miller became close. She married him and moved to Maine to live happily. She became pregnant but had a miscarriage, making her return to the acting industry.

Because of the press’s constant attention, she became uncontrollable and had frequent outbursts on set. She started taking pills to control herself and became dependent on drugs and alcohol. Marilyn got news from Eddy about Charles’ death and the package that he had left for her. After refusing to accept it, she finally opened it and came to know that all the letters written to her in the name of her dad were sent by Charles. After being devastated by the fact, she kills herself by overdosing on barbiturates. 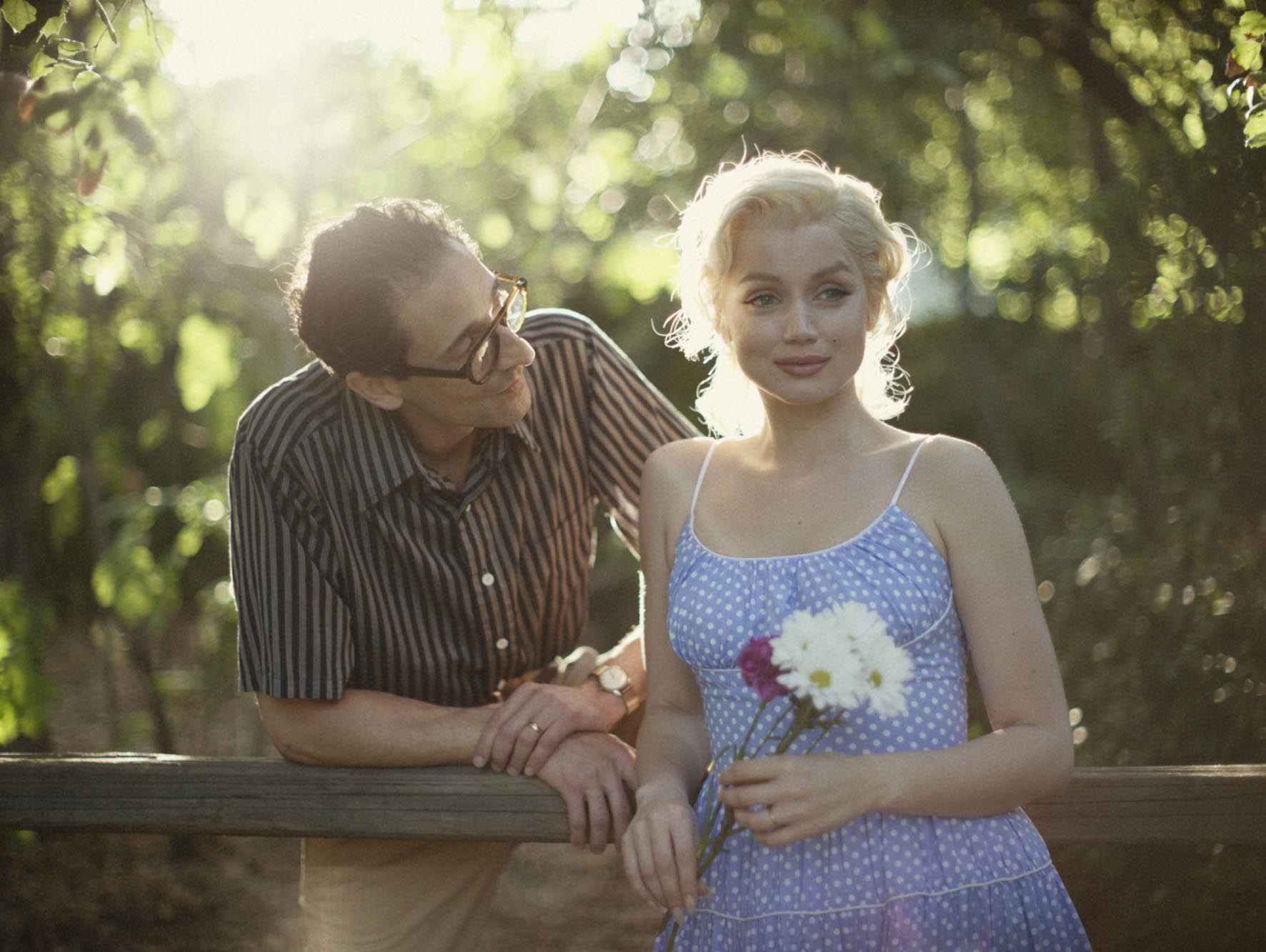 ‘Blonde’ managed to get in the top 10 just after its release but failed to match its viewer’s expectations.  The NC-17 fictional biopic was previewed at Venice Film Festival, for which it even received a standing ovation, but it is been criticized for being sexist and vulgar, which wrongly portrays the life of Marilyn.

The film got people outraged because of the exploitation and harassment of Monroe. Rather than depicting Norma’s actual life, ‘Blonde’ fictionally represents her sufferings. It is far from what the people expected. The film is filled with sexual abuse, abortion, miscarriage, rape, drug addiction, and suicide. Dominik tried his best to depict Norma’s personas as the ultra-glamorous Marilyn Monroe and as the physically and mentally tortured Norma Jeane.

Dominik implements various styles in the film. He plays with colors, black and white, frames and aspect ratios as he tries to depict the two personas of the protagonist.  He recreates scenes from her films like ‘Niagara’ and ‘Gentlemen Prefer Blonde’ and also recreates some of her very famous photos like that of Monroe and Joe DiMaggio sitting together.

He states that he made the film accurate enough as he read all that could be possible about Monroe and met people who knew her. He also stated that he adapted Joyce Carol Oates’ novel.  No matter what Dominik says, the movie is silly. He showed in the film baby talk’ with Monroe’s earlier child and showed a view of her vomiting on us.

The movie is notoriously long. It tests the patience of the audience for 3 long hours. The film was highly criticized because of its length. Besides its length, Dominik tries to capture Marilyn’s emotions by never shifting the focus from her. Ana also did a good job of portraying Marilyn. She succeeded in pulling off the character of Marilyn Monroe. Ana’s voice and beauty can make you endure the 3-hour-long movie.

If rated on a scale of 10, it would get no more than 4. The excessive nudity and exploitation of Marilyn in the film are what brought criticism the most.