My Hero Academia Chapter 219:And Spoilers

by Zayer Rehbar
in Anime
0

My Hero Academia Chapter 218 dropped recently, and I have to say, the start to a new arc looks very, very promising to me. We’re finally going to be seeing League of Villains again, but even more importantly, we have a new organization called the Quirk Liberation Army whose goal is to allow the free usage of quirks once again without any regulations that have now been imposed.

They were once led by Destro, a villain whose name was taken in the same breath as All For One by Gentle Criminal. Destro committed suicide. However, his ideas lived on after he finished writing a book and this book was seen in the hands of the CEO of the Detnerat Company in the previous chapter. He aims to follow the goals of Destro, and there are other unknown members of this organization as well. This arc has got me very excited, so let’s look into what might be happening in the next chapter of My Hero Academia. 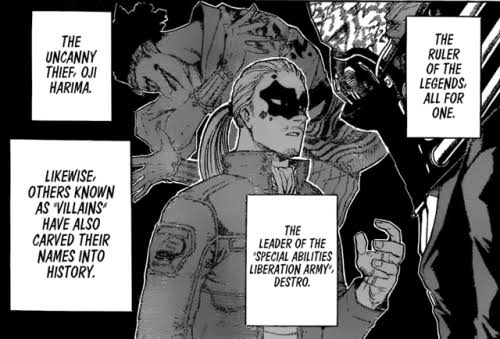 In My Hero Academia Chapter 219, we will likely see a bit more history about Destro’s children. As mentioned in the previous chapter, Destro does have children, and the leader of the Detnerat Company looks like he is one of them. Aside from that, their goal is to destroy the League of Villains. One of their members who got confronted by Bakugo and Todoroki, having newly acquired their license, is now looking to fight against those two.

We don’t know what exactly his powers are, but the combination of Bakugo and Todoroki has always been pretty lethal, and I think we will see the Villain get defeated and captured here. He will then reveal a bit of information on the Quirk Liberation Army and what their next goal is. This probably serves as a setup for a clash between not only the League of Villains and Quirk Liberation Army but Heroes as well.