WandaVision is a TV miniseries that is created by Jac Schaeffer. It is based on the Marvel Comics characters Wanda Maximoff / Scarlet Witch and Vision. The events of this series take place after the events of Avengers: Endgame. The show is produced by Marvel Studios, with Schaeffer is the head writer and Matt Shakman directing.

Elizabeth Olsen as Wanda Maximoff / Scarlet Witch. She is an Avenger the use of magic and can telepathy as well as use telekinesis. Paul Bettany as Vision who is an android that was created by using the A.I, J.A.R.V.I.S., Ultron and the Mind Stone. Vision is brought back for the series after his death in Avengers: Infinity War

Teyonah Parris as Monica Rambeau. She is the daughter of Maria Rambeau, who is the best friend of Carol Danvers. Kat Dennings as Darcy Lewis who A political science major. She reprises her role as Darcy Lewis as she played the character in Thor and Thor: The Dark World. Randall Park as Jimmy Woo who is an FBI agent. Park reprises his role from Ant-Man and the Wasp. 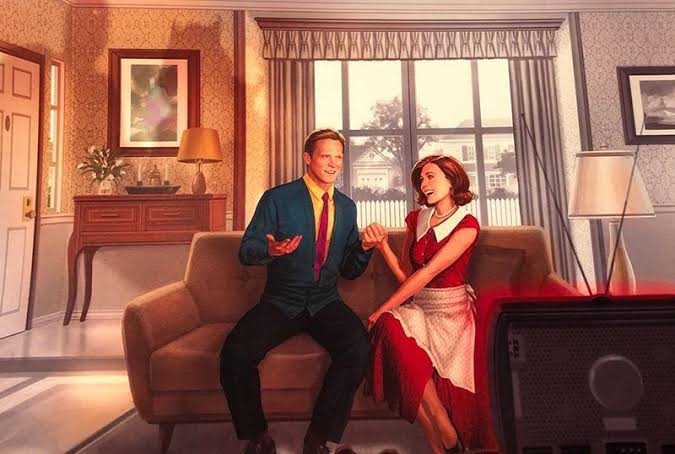 Furthermore, Kathryn Hahn as a “nosy neighbor”. As for the the show is set to debut in early 2021 on Disney+. The show will have six episodes in total and they will be released weekly rather than all at once. As for the plot, there isn’t much revealed about it but the plot has been leaked now by someone on 4Chan which could be the potential plot of the show. Before getting any further, I have to warn you that there are spoilers ahead of this show’s plot. If you don’t want to be spoiled then click away. Now that out of the way let’s begin.

It’s claimed that the series is set after the events of Infinity War and The Avengers: Endgame (where Vision is dead) that Wanda is depressed and homeless. A mysterious woman named Agatha, played by Kathryn Hahn, comes across Wanda and offers her a deal where Agatha can make a pocket dimension where Wanda can live in a perfect world as long as she wants (forever), which Wanda agrees to. Wanda’s perfect world is where Vision is alive with her two newborn babies named Wiccan and Speed.

Agatha appears as a noisy neighbor to keep an eye out in Wanda, but her real plan is to kill Wanda after the two babies grow up, which they do in a span of a week. At the same time on Earth, FBI Agent Jimmy Woo (Randall Park) with his recruits, Darcy Lewis (Kat Dennings) from the Thor movies and a now grown-up Monica Rambeau (Teyonah Parris) from Captain Marvel look into a case regarding Agatha, which leads to them getting sucked into Wanda’s pocket dimension.

There are guest stars and cameos in the show which include Lashana Lynch from Captain Marvel as an elderly Maria Rambeau (using CGI), James Spader as Ultron by using archived footage from The Avengers: Age of Ultron and Benedict Cumberbatch as Doctor Strange. Dick Van Dyke and Carol Burnett are said to have been offered cameo roles of an elderly couple in Wanda’s perfect world as well.

It’s said the final episode of WandaVision leads into Doctor Strange: In the Multiverse of Madness. Additional details are said to include that Ben Barnes and Dominic West are cast as Chthon and The Grim Reaper, respectively, who play Agatha’s two minions who are tasked to kill Vison and the babies.