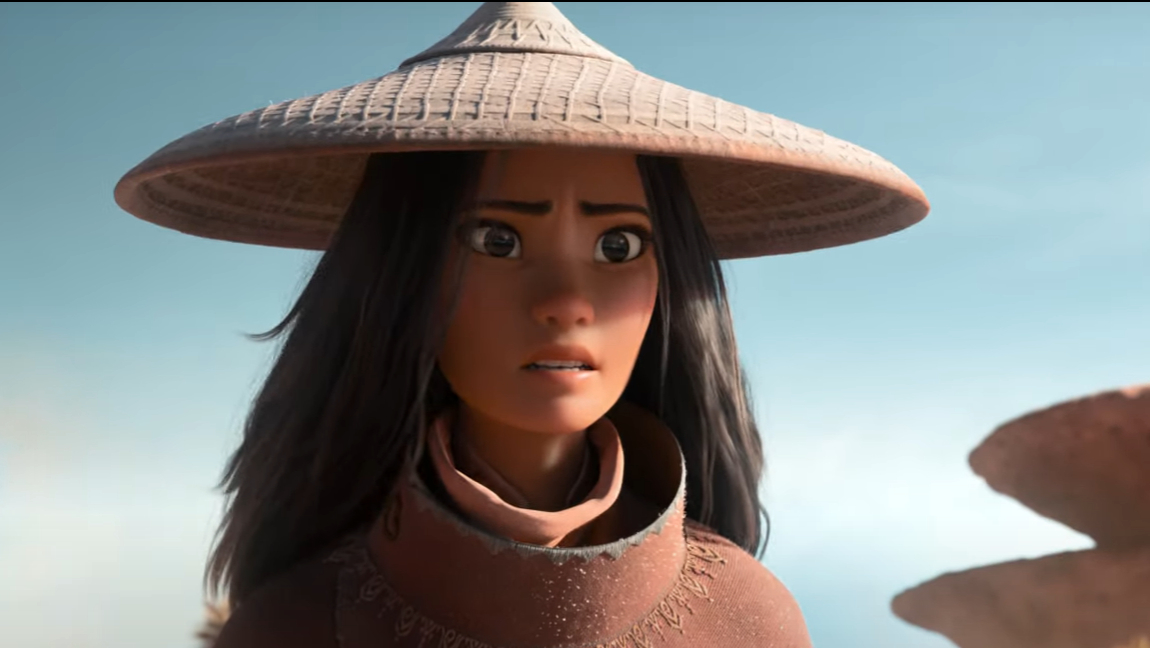 Well, Disney hasn’t even got enough of their recent animated release “Soul,” which has been receiving praise and applauded worldwide. Now it’s back to another animated release as the studios have officially dropped the very first trailer to “Raya And The Last Dragon,” which pretty much gives us a lot of Lara Croft’s Tomb Raider and Indiana Jones vibes. Directed by Don Hall and Carlos López Estrada, the movie is set to take us into a fantasy world where once humans and dragons lived together until an evil force arrived, the Dragons had to sacrifice them to save the humans who don’t see eye to eye anymore. Now, after 500 years of these events, evil is on its verge of a comeback, but this time, it will be meeting the warrior Raya who is there to save the world as she is on an adventure to find the last dragon that can bring peace to the broken world.

Disney has officially dropped the first trailer and a poster for “Raya And The Last Dragon,” which is set to release in theatres and simultaneously see a release on Disney Plus with premier access to the Covid-19 crisis. So, with no further adieu, let’s dig into a trailer that introduces us to Disney’s very own Tomb Raider Raya.

Raya And The Last Dragon – Trailer

Like most Disney movies, Raya And The Last Dragon’s trailer is having a fun and frolic introduction and settings to it. It can be centered around as a comedy adventure, unlike the serious vibes that Disney’s Frozen gave. We see a range of pranks and gags and the action shown in the movie. One thing for sure, the trailer has also introduced us to a wide array of characters that we are set to see as our titular character Raya will meet them on the journey to find the last dragon that can heal her broken world. Check out the trailer and its breakdown below.

The trailer begins with a look into the market of the Kumandra. We are soon introduced to our titular star Raya a fearless warrior princess voiced by Kelly Marie Tran, who in the very beginning of the trailer gets conned by a literal baby, namely Little Noi voiced by Thalia Tran. She is accompanied by three monkeys and soon befriends Raya on her journey to find the world’s Last Dragon.

So straight into it, we get the introduction from Raya herself, who talks about her ancient lands and their people who never see eye to eye and meet Raya’s father, Chief Benja, voiced by Daniel Dae Kim, who is claiming that the world can be brought to peace if someone takes the first step according to which Raya has to find the Last Dragon.

We are thus given a glimpse of a range of characters looking for the last dragon apart from only Raya, searching for it for the last six years until, as we can see in the trailer, she finds it. So Raya meets Sisu, voiced by Awkwafina, a water dragon who can transform into a human and is the last remaining one of his species, which is not quite ready for Raya’s task come up with.

The next moment, we meet Raya’s nemesis Namaari voiced by Gemma Chen, who is looking forward to conquering the world and as she plans to steal the dragon away from Raya. At the end of the trailer, we see a range of adventures that Raya is bound to take on as she battles Namari and figures out a way to bring peace to the world with her new dragon friend’s help Sisu. We also get a glimpse of Sisu using his abilities to take human form in the end, but it seems like that’s not the only thing he could do, as we can clearly see in the trailer battling him the enemies. So there’s a lot more in the movie to see for.

The Official Premise Of “Raya And The Last Dragon”

As per the official premise of “Raya And The Last Dragon, the movie will be set in a fantasy world where humans and dragons lived together called Kumandra. Both dragons and humans lived in harmony until monsters called the Druun threatened the land and all the dragons had to sacrifice themselves to save the world.

500 years into the future, the monsters are returning, and so Raya and her pet pill bug Tuk Tuk are on a journey to find the last dragon who can avoid this event and bring peace to the world. But as the journey progresses, Raya realizes it’s pretty not easy to bring peace to the world, and it will take more than the last dragon to save it at last.

Read More: “Stray” Trailer! A Documentary On The Over Population Of Stray Dogs In Istanbul And A Look Into The Lives Of Three Dogs!

Cast Of “Raya And The Last Dragon”

The cast of “Raya And The Last Dragon” starts with our titular characters as warrior princess Raya who has been training to become a Guardian of the Dragon Gem and is being voiced by Kelly Marie Tran, Sisu, the water dragon who can shapeshift into humans is being voiced by Awkwafina, Gemma Chan as Raya’s nemesis Namaari, Daniel Dae Kim as, Raya’s father Chief Benja and Sandra Oh as Raya’s mother, Virana.

Benedict Wong will join them all as Tong, Izaac Wang as a 10-year-old entrepreneur Boun, Thalia Tran as the baby con artist Little Noi along with Alan Tudyk as Tuk Tuk, Lucille Soong as the leader of the Talon land Dang Hu, Patti Harrison as the chief of the Tail land and Ross Butler as the chief of the Spine land.

Release Date And More On “Raya And The Last Dragon”

Walt Disney’s “Raya And The Last Dragon” will be releasing in theatres on March 5, 2021, along with a simultaneous Disney Plus release with premier access. The movie is directed by Don Hall and Carlos López Estrada and co-direction by Paul Briggs and John Ripa. The writing duties were handled by Qui Nguyen and Adele Lim, with a music score by  James Newton Howard. “Raya And, The Last Dragon” is produced by Osnat Shurer and Peter Del Vecho under Walt Disney Pictures and Walt Disney Animation Studios. For further updates revolving around entertainment, TV shows, anime, movies, and gaming, stay tuned to Otakukart News.