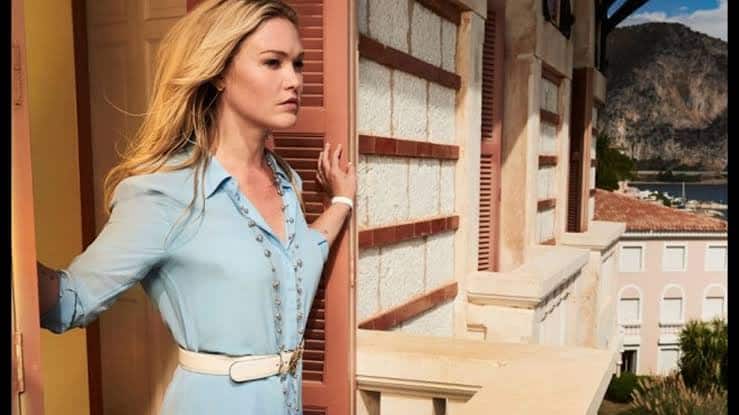 The talented Julia Stiles will once again take the lead in Riviera Season 2. The drama on lies and deceit arrives on our screens this spring on Sky Atlantic. The network dropped a fresh trailer to give audiences a glimpse into what they should expect with Riviera and Georgina Cilos. In the trailer, she tries her best to keep on her position of power and influence. So there’s the element of intrigued and Machiavellian tactics that we see in Riviera Season 2.

In the trailer, you see Georgina being told by a voice-over that this is Riviera and that people get away with anything promoting audiences to think if Julia aka Georgina has gotten away with the murder of Adam (played by GoT famed Iwan Rheon) and her desperate fight back to retain power within Cilos household. For now, Constantine’s mysterious death has rocked the Cilos family. It’s mostly about Georgina vs. Irina Clios (played by Lena Olin) and her children Christos (Dimitri Leonidas) and Adriana (Roxanne Duran). And then, of course, there’s the Eltham family, that Georgina must contend.

For Season 2,  Juliet Stevenson will play the role of Lady Cassandra Eltham and her children will be portrayed by Daphne (Cara’s sister Poppy Delevinge), Nico (Jack Fox) and Daphne’s husband Raafi (Alex Lanipekun). You also see Georgina’s uncle Jeff ( Will Arnett) that will have something to do with a tainted history in America. Georgina will see a new love interest in Noah (Grégory Fitoussi).

Updated on April 22, 2019:
There has been a lot talk from the cast of Riviera about the show lately. As the trailer declared, ‘you need need glamour. Connections. Thick skin. Money. Lots of it.’ According to Fox, the show will kick off the summer in style and we can’t wait for it to happen. We all love a holiday, but the show does point out that all holidays aren’t delightful.

“It’s big. It’s a show – a spectacle. Grand. Decadent. The tagline is ‘a sunny place for shady people’ and I think that’s bang on the money. It’s beautiful, corrupt.”

We cannot wait for the show to finally begin. What about you? Let us know your thoughts in the comments section below!