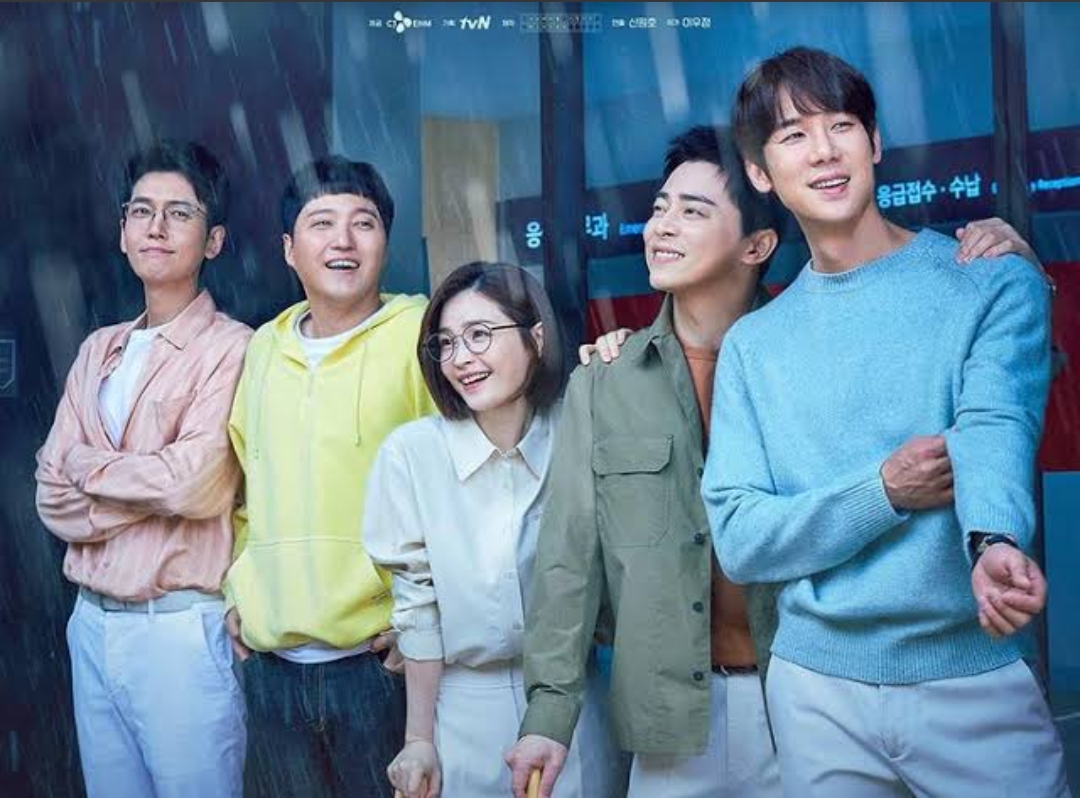 While in the first half of the year, K-dramas absolutely ditched the rom-com genre, producing dramas dealing with all sorts of thrill, crime, and suspense, including ‘Vincenzo,’ ‘The Penthouse 2: War in Life,’ we are finally being fed with dramas circling other genres, along with the suspenseful ones. While some of the dramas are coming back with their next seasons (the viewers have been craving for them for months), we are also going to have a few fantasy dramas that never go out of style (one of which features the unofficial Queen of Fantasy Dramas: Park Bo Young).

We have listed down the top ten K-dramas that will be airing in the month of June and July, keeping you entertained throughout the period. The list includes all the shows that the viewers have been anticipating for a long time or the ones that have gained huge popularity after they started airing. 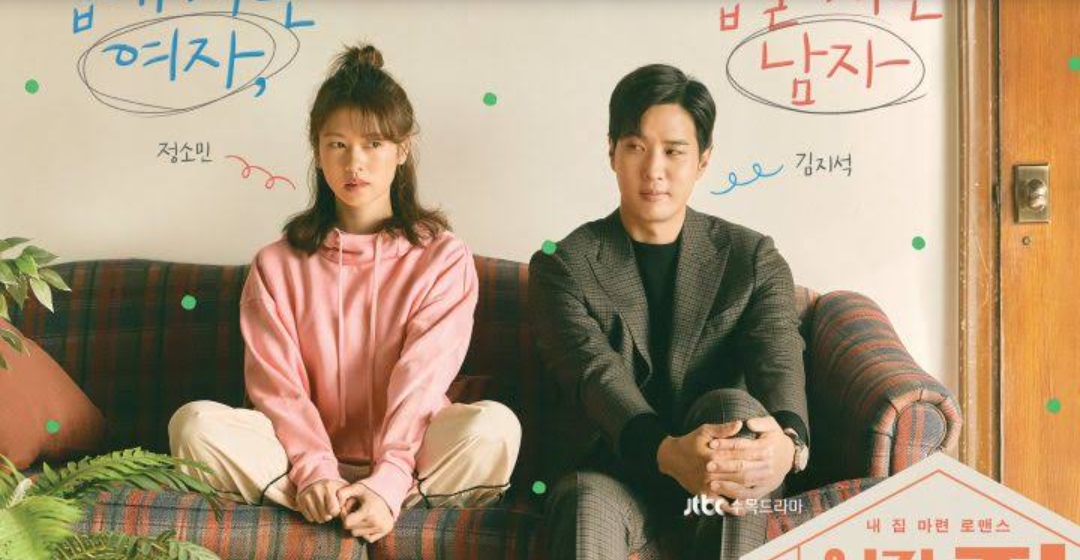 ‘Monthly Magazine Home’ is a home-searching rom-com that centers on the story of a rich and successful man who buys a house and a poor woman who is ought to live in it. The two leads are very different from each other— while Na Young-won is one of the editors of the monthly living magazine called ‘House,’ Yu Ja-seong is the representative. The show tells the tales of the editors of the House Magazine. The show airs two episodes a week, each on Wednesday and Thursday at KST. You can also tune in to streaming platforms like iQiyi and Viki for watching it online. 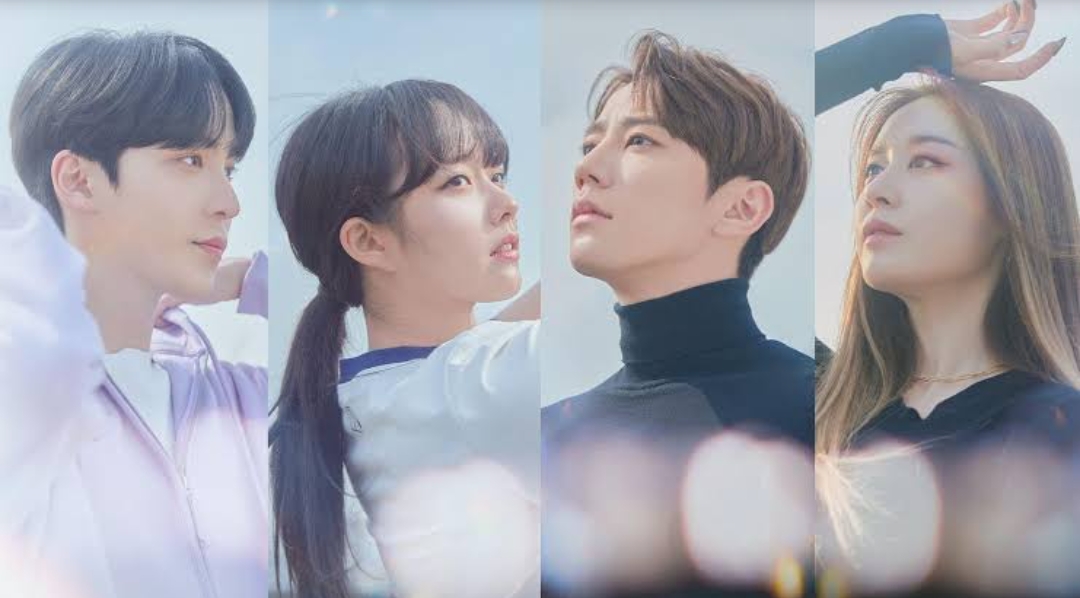 Adapted from a web-based comic by Park Kyung Ran, Imitation is a musical rom-com revolving around the lives of K-pop idols in the entertainment industry, with Lee Ma Ha, one of the members of a rookie K-pop girl group named ‘Tea Party,’ and Kwon Ryok, a member of one of the top boy bands named ‘Shax,’ as the leads. Lee Ma Ha was originally a part of the girl group ‘Omega III,’ which disbanded due to a tragic incident, but now she has to support her life by performing as an impersonator of La Li Ma, who is a popular solo singer.

Although Kwon Ryok initially does not like her, both of them begin to fall for each other as they kept crossing paths and enters into a secret relationship which, if exposed, can put both of their careers in danger. The drama is available for stream on Viki with English subtitles for free, with new episodes releasing every Friday. 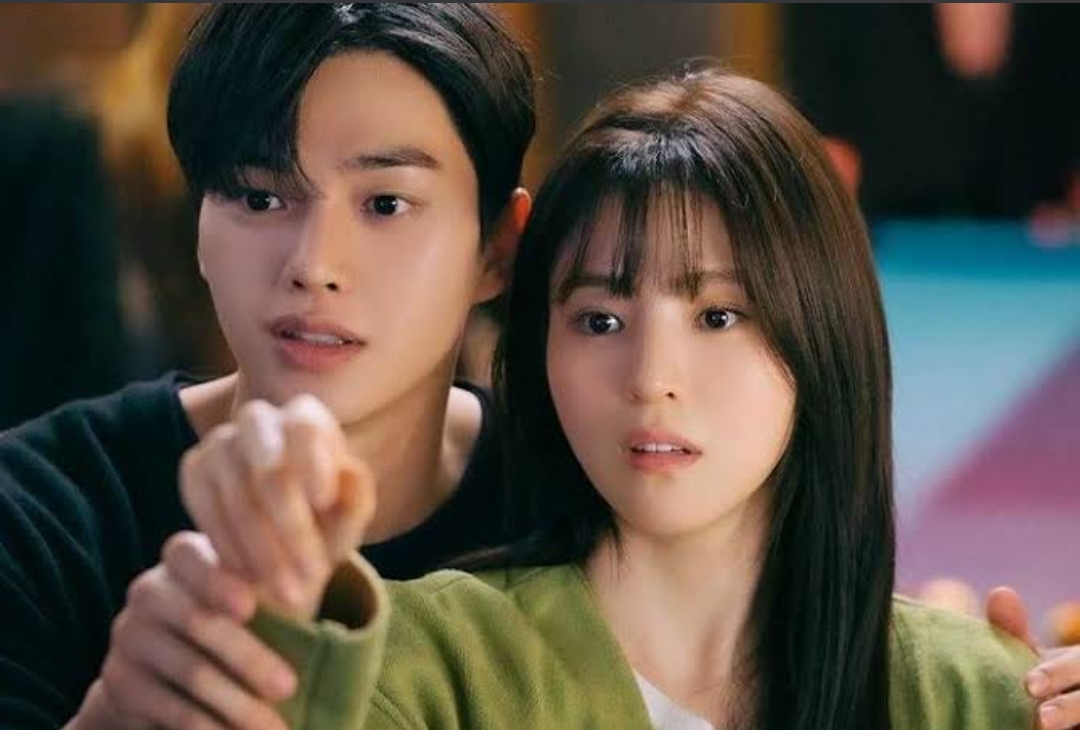 Nevertheless is an ongoing K-drama which has been adapted from a webtoon of the same name. The story revolves around two people who are poles apart from each other but still cannot help but get attracted. While Park Jae Eon is a big flirt who doesn’t let his emotions control him and finds dating nothing but a waste of time, Yoo Na Bi wants to date but has lost her faith in love owing to a bitter experience with her former lover. Although Jae Eon always sets a boundary between him and other people, he wants to cross those as well after meeting Yoo Na Bi.

On the other hand, Park Jae Eon, though doesn’t believe in fate anymore, suffers a hard time trying to stay away from him. It will be interesting to watch how a real romance blossoms between the two. You can watch the episodes on jTBC every Saturday and on Netflix with proper subtitles.

7. At a Distance, Spring Is Green 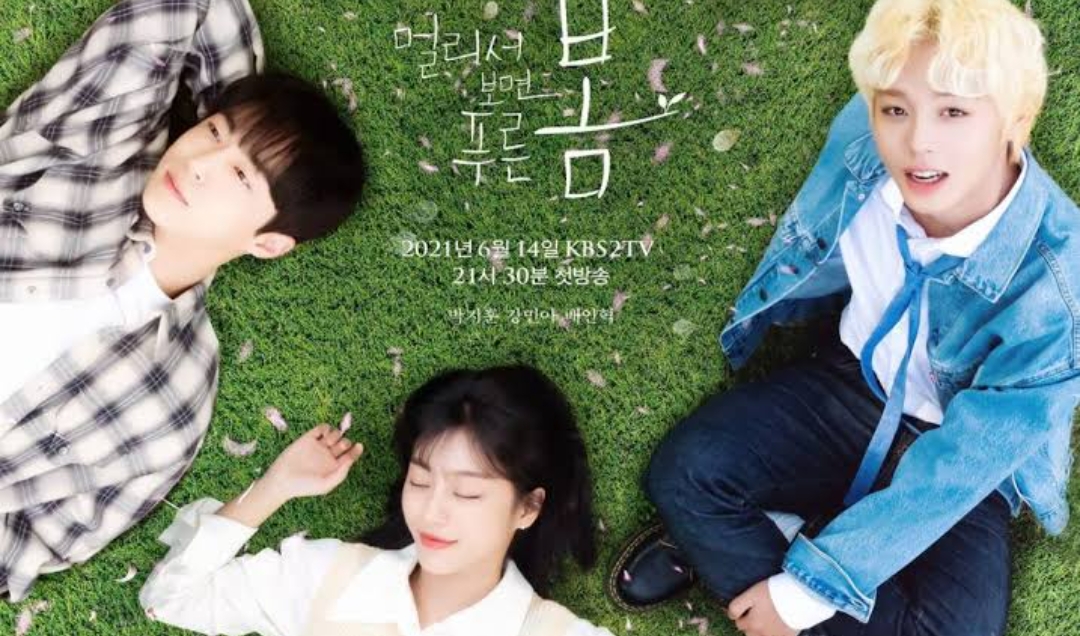 At a Distance, Spring Is Green (Credits: Viki)

Based on a popular webtoon by Ji Nyoong, ‘At a Distance, Spring Is Green’ is a coming of age story centering on young university students in their twenties and the problems they face in their lives during this time. The story revolves around a first-year student named Yeo Joon, who appears to be perfect with a good appearance, coming from a wealthy family but hides a lot of pain in his heart. When he meets Nam Soo Hyun in a group project, who is a junior in his department and is academically an excellent student coming from a low-income family, Yeo Joon develops a liking towards him and follows him around, which eventually leads them to become good friends.

Meanwhile, a fairly average student named Kim So-bin, who strives to stand out in almost everything, somehow ends up being friends with them, and thus an unlikely and strange trio forms. You can check this drama out on platforms like Viki and iQiyi. 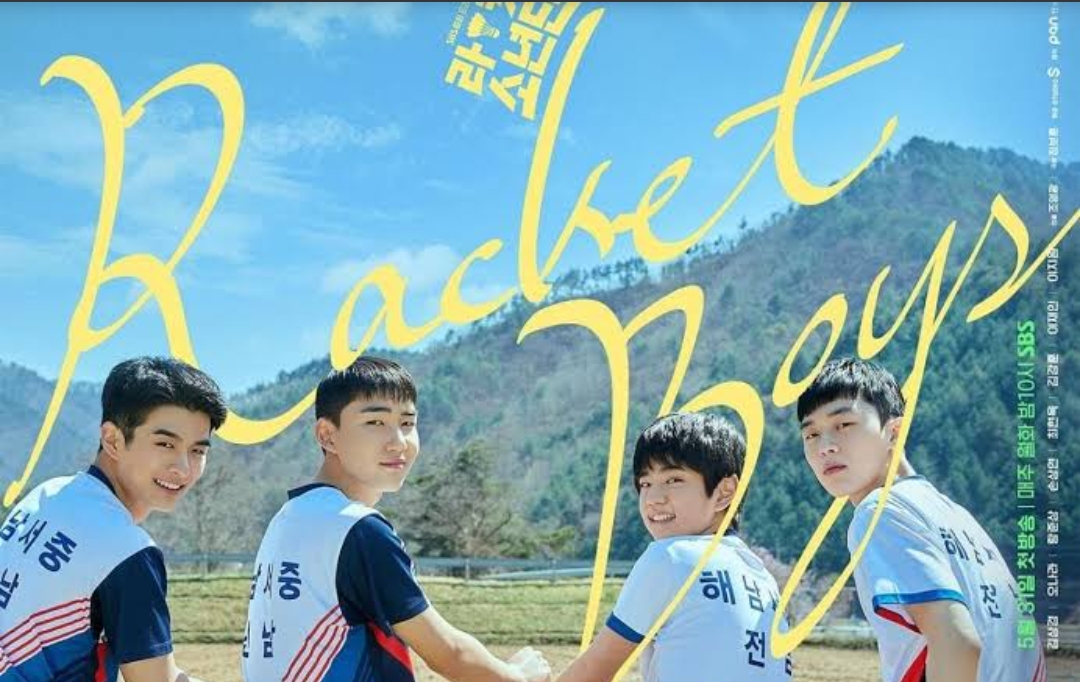 The series revolves around the lives of sixteen boys and girls as they grow and the badminton team of their school, Haenam Seo Middle School, which is not in good shape and is on the verge of getting disbanded. Yoon Hyun Jong takes up the responsibility to coach the boys team, who had been the best badminton player himself and will lead the boys to play in a junior athletic championship.

The players on his team include Yoon Hae Kang, Bang Yoon Dam, Lee Yong Tae, and Na Woo Chan. On the other hand, Ra Young Ja, who has been a legendary badminton player, serves as the coach of the girls’ badminton club at another middle school in Haenam, which tops the list of the best badminton teams among their peers. It is a slice-of-life show that focuses on the theme of friendship, personal growth, and sports. The aired episodes are available to watch on Netflix with a subscription. 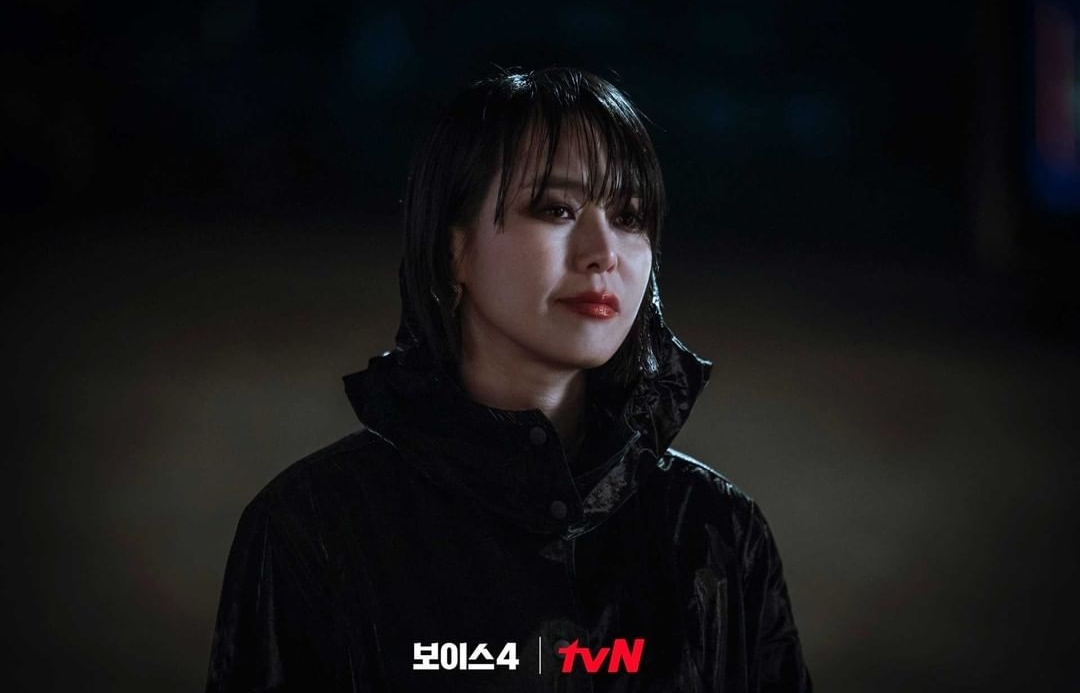 The fourth installment of the Voice series, ‘Voice 4: Judgement Hour’ follows the storyline after the events of the last seasons. The story follows a serial killer who has an enhanced hearing ability and is identical to Kang Kwon Joo, because of which she also possesses an enhanced hearing ability. The serial killer uses this ability to his advantage and begins to kill people. On the other hand, Derek Jo is the leader of a team of Los Angeles Police Department who deals with criminal gangs — and is a man of principle who doesn’t allow any errors.

Kang Kwon-Joo joins hands with Detective Derek in order to catch the killer. Although she has PTSD, she does not let her duties as the leader of the emergency 112 call center slide away. tvN releases two episodes per week, each on Fridays and Saturdays. You can watch the series online on Viki and We TV, where they are available with proper English subtitles.

4. Doom At Your Service 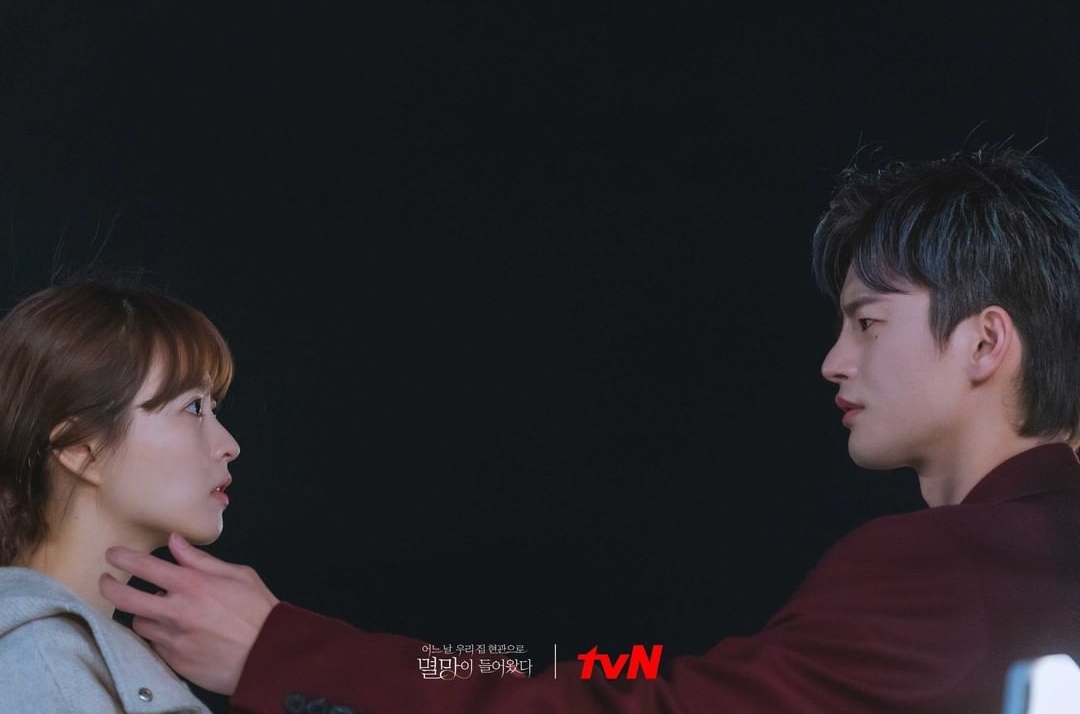 Doom at Your Service (Credits: tvN)

The story follows a web novel editor named Tak Dong Kyung, who has been working hard for years after the death of her parents. Her life appeared to be more than stable until she comes to know that she has brain cancer. This upsets her, and she blames her life and even curses everything to disappear. However, this leads her to summon Myeol Mang, unintentionally, who is neither human nor god, but the doom.

Although he can do nothing to make her stay alive, he tells her that she can ask him to grant her other wishes, which leads them to make a deal of living each other for a hundred days during which she will live the way she wants to, putting everything at risk. ‘Doom At Your Service‘ is an excellent fantasy-romance drama with amazing chemistry between the leads. Moreover, the story of the second lead couple is interesting, aiding to make the drama worth watching. You can watch the drama on platforms like Viki and Viu Tv.

3. My Roommate Is a Gumiho 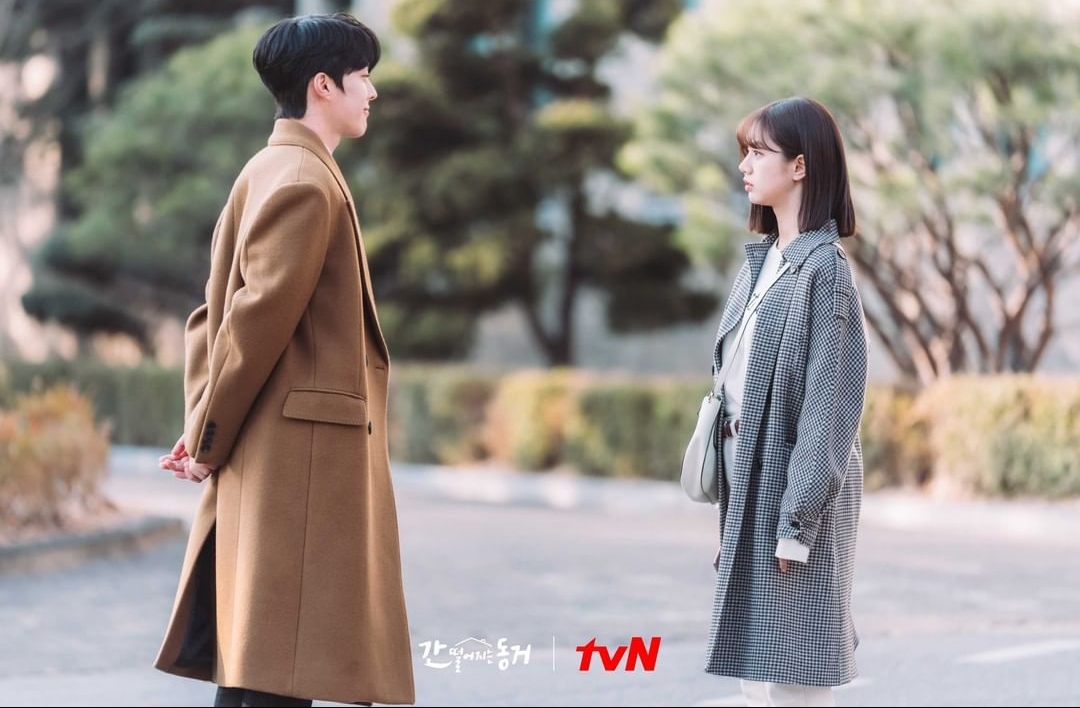 My Roommate is a Gumiho (Credits: tvN)

The story centers on a 999-year-old nine-tailed fox named Shin Woo Yeo, who is living in his hope to become a human after he is done with collecting human energy in a fox bead. However, a series of incidents take place, and Lee Dam, who is a university student, ends up swallowing the bead unintentionally. The bead is capable of existing without harm inside a human body for not more than a year, after which it is ought to break inside the body, resulting in the death of the person. Shin Woo Yeo does not want his only chance to become a human to get wasted and therefore reveals their predicament to Lee Dam and suggests she live together with him until they come up with a solution.

Lee Dam, who has been single her entire life, is bound to agree to his proposal and live with him as a roommate. The show can be watched online on iQiyi and Viki along with English subtitles every Wednesday and Thursday.

After taking us onto a rollercoaster ride in the last two seasons, SBS is back with the third and the final season of the show, ‘The Penthouse’. As showcased in the last season, Su Ryeon has avenged on the residents of Hera Palace, and now all their money is gone after investing in Cheonsoo District. Moreover, because of covering up Seol A’s death, they have to stand before the court of law, getting themselves caught in their own traps and losing everything they had, including their fortunes and reputations.

However, it looks like Su Ryeon’s nightmare is not yet over as she witnesses Logan dying right before her eyes. A lot of plotting, thrill, suspense, and crime are yet to follow in the newest season as the desire for revenge is still not over. SBS has been releasing one episode every Friday. You can also watch the drama along with the other seasons of the show on Viki with English subtitles.

‘Hospital Playlist 2’ is a sequel of one of the most popular medical K-dramas out there which revolves around the everyday life of five doctors working at Yujie Medical Center, who have been friends with each other since their medical school days, and their patients inside the hospital. They are also inclined towards making music together as members of a band called ‘Mido and Falasol.’ The second season is going to continue showcasing the heartwarming tale of friendship, music, and love amidst their responsibilities as doctors.

The teaser suggests that the latest season is going to put its focus more on the ordinary lives and relationships of the doctors, more than their day jobs. It will also deliver the answers to the questions that were left unanswered in the last season’s finale, including the blooming romance between Song-hwa and Ik-jun. tvN releases one episode per week on Thursdays, and international fans can check them out on Netflix on the same day.