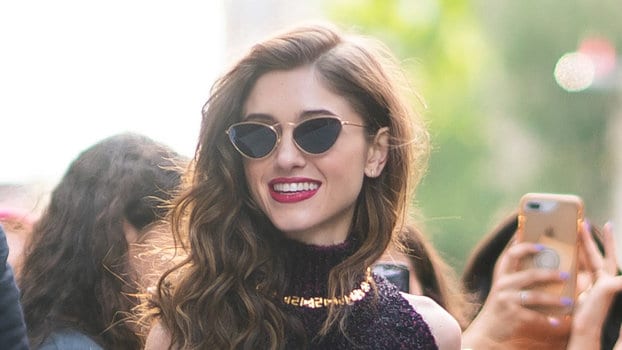 Natalia Dyer is no stranger to chic dressing, the actress has been on Stranger Things for three Seasons now and is one of the driving forces of the show. Natalia is busy promoting Season 3 of Stranger Things, which has done exceptionally well on Netflix.

On Monday Natalia Dyer, 22 brought the heat to NYC as she hit the promo trail, at the Build Studios. Natalia joined in the conversation about the hit Netflix Originals. Stranger Things first hit screens in 2016.

The 22-year-old Natalia looked chic in a tweed mini with lime, pink, and black tweed skirt. She paired it with a purple knitted crop top and opted for loose curls and makeup. Her sleeveless sweater and tweed plaid skirt are by Versace, and her neon Le Silla pumps will cost you $514; farfetch.com.

Natalia sealed the look with neon green heels. Her hair was framed by blue sunglasses from Polaroid, and as she departed the studio, Natalia changed into a grey outfit. With a pair of epaulets on her shoulders, Natalia’s outfit features an all-grey color. The second costume gave a militaristic vibe, and Natalia gushed over her Stranger Things co-stars.

Natalia Dyer and Charlie Heaton (Jonathan on Stranger Things) recently confirmed their romance after being in speculation for 3 years now.