One Piece Wano Arc has finally got to an interesting point in the Onigashima raid. Well if I didn’t know better I would say this would be the climax for the arc. But since we have the Marine keeping tabs in the situation, Shanks who is also considering paying a visit. And Big mom who is still standing by. Then it would be premature to conclude that the arc has reached its climax.

In this post, we will be looking at One Piece Chapter 988 update and we will also look at the full spoilers released of the upcoming chapter. One Piece 987 will be released over this weekend and its spoilers are already released. Then a few days before the Chapter 988 update, it is then that its spoilers will be released. Shonen Jump will be going on a holiday after this week’s chapter so One Piece 988 will be delayed.

One Piece Chapter 988 will be released on Sunday, 23 August 2020. The chapter will still follow the usual Sunday release schedule unless there are breaks in which case announcements are made in advance. We will then take a look at the full spoilers released with more updates on how the fight against Kaido will proceed from here on.

You would remember that the last chapter ended just when the nine red scabbards directly attacked Kaido in what seemed like a defeat to him. We have managed to get hold of this information courtesy of One Piece Reddit. The spoilers have revealed a very interesting turn of events. We finally see Kaido’s blood for the very first time in the entire One Piece series. Well if we are to exclude flashbacks of course. 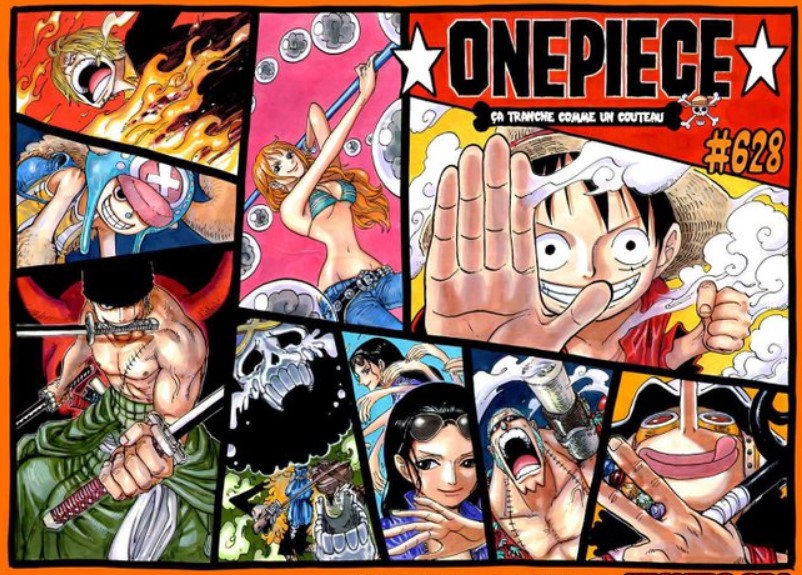 It is hinted that Jinbe finally appears and the Straw Hats crew was finally shown wearing their usual clothes riding on a giant pug dog. One piece 987 then continues when Kaido was under an attack from the nine red scabbards and this made him recall the day he was struck in the same manner by Oden. He also remembered Oden’s words that Oden will still live on and he should not underestimate the scabbards.

A lot of interesting things happen in the chapter. The scabbards managed to use Ryou in the same manner that Oden did and managed to pierce Kaido’s skin. This made him bleed as he screams and seems to be in pain. A shocking thing considering that Kaido appears to be immortal and never feels pain.  Big Mom sees this and wondered if Kaido was dead.

When Kaido’s Men tried to intervene, they were stopped by Hyogoro and the Yakuzas. Yamato officially breaks off her affiliation to the Beast Pirates and as she tried to attack Kaido, Ulti moved in and stopped her. Nami and Carrot free themselves from Big Mom’s yokai using electric attacks.

Kaido appears to be wounded and was bleeding through his mouth, but id didn’t seem like serious injuries. Kaido reveals how he has been aware of this plan from way back in Punk Hazard and talks about Pirate alliances and how they are marked off with betrayals. He added that Luffy will betray the samurai just like it is typical of any Pirate.

The scabbards are not worried about this and tell him that Luffy is not like other Pirates. They believe that he will stand at the top of the seas and that even if all Samurai were to die. Luffy will still bring dawn to the land of Wano. Big Mom is standing by the side and asks Luffy why he came to Wano. She asked if he was there to defeat Kaido. But Luffy retorted and said that he came to take them all down, Kaido, Big Mom, Orochi, and all their subordinates. He tells Big Mom that this has become a full-scale war. The allied samurai then started to attack Kaido’s castle. Zoro and Kid also appear fighting and Law is also int the castle as well.

Surprisingly, Marco and Perospero arrived together and it looks like they will be working together. We would remember that the rest of the Big Mom Pirates are still not aware of Big Mom’s joining forces with Kaido. And it also looks like they might not agree to this as Perospero showed no support of it.

Seeing all this, Kaido accepts the scabbards’ challenge and wanted to show them the true power of the strongest creature alive. He transforms into his dragon form and arose to the sky with the scabbards hanging on his body. He went through the roof into the top of the dome. Luffy tells the scabbards that he will follow them soon as it seemed like he might be planning on stopping Big Mom for the time being.

Kaido tells the Scabbards that although this is like 20 years ago, Oden is not with the scabbards so he believed they have no chance at victory. The minks were already waiting by the dome and Nekomamushi pointed out to Kaido that even if Oden is no longer with them. It is the night of the full moon so they believe that good things will happen.

The upcoming chapters of Wano Arc will be filled with action. Now we already know everything else we need to know about Wano and the real fights can then begin. It looks like Kaido will fight the scabbards first but we not yet sure up until which point as Luffy was planning on joining them not long.

It is likely that Luffy will be fighting Big Mom as now everyone else is already occupied and Big Mom won’t just stand by. Since every figure in the fight is now in one place then several battles will be starting soon. Marco has arrived with the rest of the Big Mom Pirates so now the victory will depend on which guys go against which beast pirates members.

So now the alliance will likely come up with a strategy and Luffy already decided on fighting Kaido. Law, Marco, Zoro, and the others are already there so in the upcoming chapters we will see the strategy to liberate Wano in action. Like Big Mom, Kaido, All-Stars, Flying six, etc will all face their respective opponents based on the strategy that the alliance will come up with for a good chance at victory.