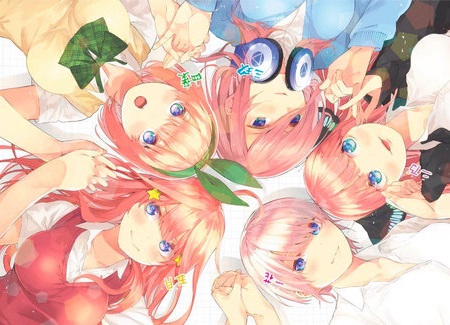 In this article, we will be talking about The Quintessential Quintuplets Chapter 114 update and Spoilers. The latest Chapter, 113, the school festival has come to an end, and it is the time for entrance exams. Maeda, Uesugi, and Futaro were discussing how things are finally getting back to normal as they will soon be attending classes. Futaro then mentioned that he has an appointment later with the five girls. This led to them asking how Futaro has managed to tell them apart. He then told them that it is because they used to fool him a lot that he now can tell them apart.

As their conversations go on, they figured that Futaro has something he’s hiding. So when they confronted him, it turns out that he likes one of the girls but has been struggling to find time to confess. And on top of that, he is worried that it might affect the tutor-student relationship that they already have. Futaro is about to make his confession, but it is not yet revealed to whom, as chapter 113 came to an end. Hopefully, Chapter 114 will come with more to reveal as things are starting to get serious.

The story is a school romantic comedy about five girls who really hate studying. Their tutor Futaro, a highschool boy who is very smart only tutors them because he is in need of extra cash. He now finds it more difficult to tutor them as they are always coming with excuses. And at this rate, they are doomed to fail, which will give Futaro a bad reputation. Futaro must then come up with a plan that suits each of them so that they pass as they think that he is a loser.

Created by Negi Haruba, the Manga launched in August 2017 in Kodansha’s Weekly Shonen Magazine, producing its 12th volume in Japan on November 15, 2019. The Manga currently releases on a weekly basis with Chapter 114 scheduled for a release on the 11th of December 2019, although this might vary depending on the websites as they received translated manga at different dates. The Manga creator revealed on the 4th December 2019 that the Manga would end in its 14th volume as he added that it has been difficult for them to keep the manga going since its serialization. The anime adaptation made its debut on January 10, 2019, producing 12 episodes with a second season already planned for production.