As a child living in Lawless, Angelo Lagusa has witnessed a tragedy: the Vanetti mafia family has mercilessly slaughtered his parents and younger brother. Losing everything he holds dear, he leaves both his name and hometown behind, adopting the new identity of Avilio Bruno. Seven years later, Avilio finally has his chance for revenge when he receives a mysterious letter prompting him to return to Lawless. Obliging, he soon encounters the Vanetti don’s son, Nero, and seeks to befriend him using the skills he has quietly honed for years.

Set during the Prohibition era, 91 Days tells the story of Avilio’s dark, bloodstained path to vengeance, as he slowly ends each of the men involved in the killing of his family.

91 Days is a revenge story of a boy named Angelo. Angelo is a man that lives only to obtain his goal, and that is his revenge against the people who murdered his family. Angelo is patient, smart, and emotionless.

To talk more about Angelo, He lost everything when the Vanettis killed his family; he someway manages to escape. Seven years later, he returns to the city to seek revenge.  I will try to give a useful review without spoiling it anymore. Angelo somehow manages to gain trust from Vanetti’s family’s eldest son. Angelo’s cleverness makes him fascinating to watch. How he goes about manipulating others and steadily carrying out his plans paints an engaging story even early on in the show. 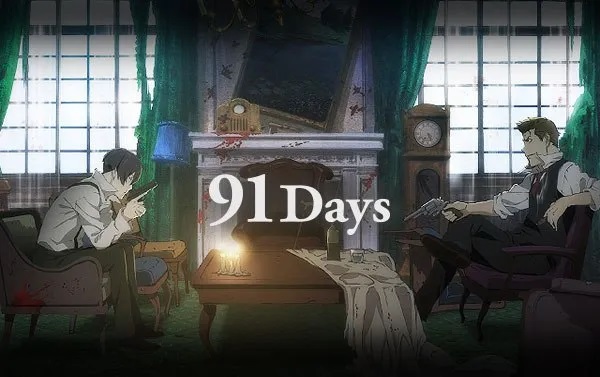 There are quite good dialogues like, “Friendship is a more reliable tool than a knife,” and “Just because you saved my life doesn’t make us friends.” Every Character has an essential role in the story. Animation, Art is up to the mark, shuka studio has done an excellent job.

Even Sounds, opening, and end give you the feel of old age, which is right and a good match for such an act of violent revenge & mafia anime. To put it in one word, it is freezing. I liked this anime show very much, the studio adapted well to catching the 1900s mafia era, and even the animation was up to the mark. I’m thrilled that I got to see such Anime, and if you like stories such as revenge drama, and mafia, then I highly recommend you watch it.