My Hero Academia returned after a long break, just like all the other manga in Weekly Shounen Jump and the comeback chapter was quite good. Even though the last few chapters have been generally good, My Hero Academia Chapter 213 was my favorite because of all the information that was jam-packed into one chapter.

One of my biggest criticisms of My Hero Academia recently has been the amount of information that the chapters contain. I’m fine with Horikoshi doing just 13 pages for his health because we fans need to understand that he cannot go 100% all the time. But, those 13 pages should be comparable to his previous works, and I felt like recently, they weren’t. This chapter was completely different though, and I thoroughly enjoyed reading it. 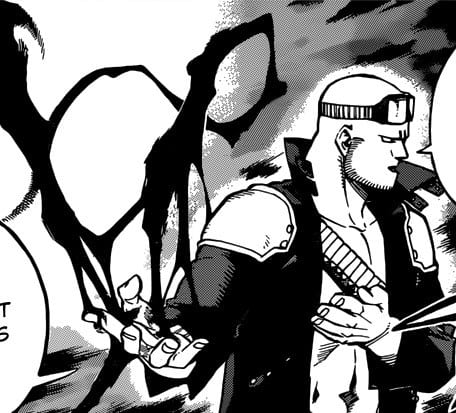 My Hero Academia Chapter 213 told us that Deku is actually getting a new quirk now. Through time, he’ll actually manifest the quirks of 6 more people, and that certainly does make him overpowered.

This is because One For All is a quirk that has bits of all the previous users’ quirks as well. Deku has already gained Black Whips for now, and it is going to be really interesting to see where Horikoshi takes this. In My Hero Academia Chapter 214, we will see the fight continue because Aizawa wants it to. Midoriya is certainly fine, but he’s worried about Uraraka being hurt.

It is possible that Midoriya won’t go all out at all because he is worried about using his quirk and hurting others again, but he certainly doesn’t want to lose either. In that case, I’m sure that we’ll him be reluctant to using his quirks at first, but as the fight goes on, he’s forced to use it.