Hailee Steinfeld finally stepped and joined hands with the cinema giant Marvel Studios when she appeared on the sets of Disney Plus Spin-off series “Hawkeye” sporting her own superhero costume, probably for Kate’s role Bishop, the daughter of Hawkeye. From the set’s leaked photos, it’s no one wonder the new marvel family member is definitely having a good time shooting for the film and working with “Oh so talented” Jeremy Renner. Hailee Steinfeld, who is popularly known for movies like Ender’s Game, Pitch Perfect Film series, Romeo and Juliet, and now joining a universe like MCU, seems like just another step for success on the way.

Recently in an interview, Steinfeld talked about being a part of Marvel’s Disney Plus project and her experience working with Jeremy Renner. So here are all the details we can gather about the coming Disney Plus special “Marvel’s Hawkeye.” 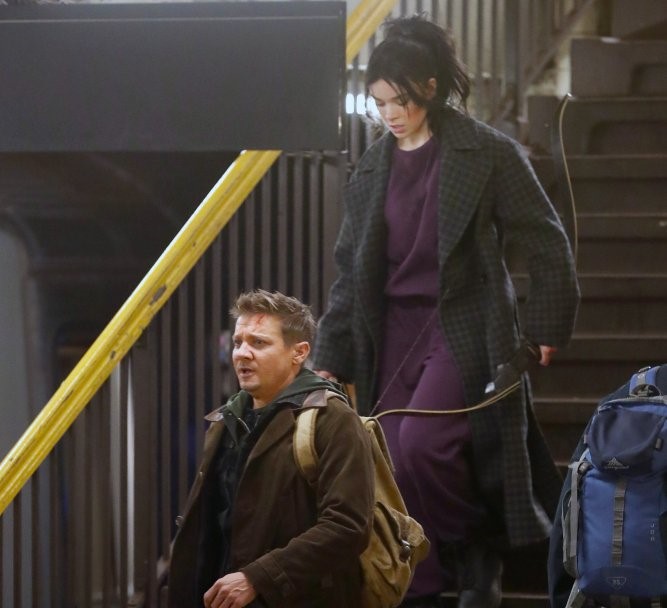 Marvel Studios President Kevin Feige broke Hailee Steinfeld’s news joining the series during Disney’s Investor Day presentation. This was now followed by Hailee Steinfeld working on two projects side by side, including Disney Plus’s Hawkeye and another show for Apple TV Plus called “Dickinson,” based on the female poet Emily Dickinson.

Two weeks ago, Hailee Steinfeld was caught in a picture walking along with Jeremy Renner near the New York City Subway. Steinfeld sported a purple costume similar to Kate Bishops in the Marvel comics and also carried a bow and arrow in her hand. The picture spread on the internet like fire, and fans have already speculated that she is definitely playing Kate Bishop. Marvel Studios has not given the word officially on which character she will be playing, but there are huge chances it’s none other than Kate Bishop.

While talking to ABC Audio, Hailee talked joked about the picture they were caught in and shared her feelings on how she is honored to work with Marvel Studios and her experience working with Jeremy Renner. She also talked about how it’s fun to work on two completely different projects as in Dickinson and Hawkeye series at the same time and how different their universes are.

Hailee Steinfeld joked, saying,” Yeah, right, we were trying to get somewhere, and a couple of pictures were taken, and now here we are” while talking about the subway picture. When asked about her experience with Marvel, Hailee said,” So, so excited and honored obviously to be part of the MCU and be playing alongside Jeremy. He’s wonderful and quite, quite a different world than Dickinson” while also mentioning working on her another project.

Hailee Steinfeld also shared how it’s amazing as an artist to work on two different playing fields and how both shows differ in the plot as she goes from an arrow-hitting superhero to a female poet from the 19th century.

Overall, it is gonna be a rollercoaster ride when we see the father-daughter duo plot working alongside in the “Hawkeye” series of upcoming MCU Disney plus project, portrayed by Hailee Steinfeld the very talented Jeremy Renner. Whether Hailee will be taking up the role of Kate Bishop or not remains to be seen as no further details were revealed regarding the plot and settings of the coming show. Also, Hailee Steinfeld’s “Dickinson” on Apple TV plus is just another show on the list to look for.

Hawkeye is scheduled to release in 2021 on Disney Plus. Stay tuned for more updates.