House of five leaves is a Japanese animated series released in 2010 and consisted of 12 episodes. It is based on the manga of the same name. Before you go and watch this anime, keep one thing in mind. It is not an action show. The show is set during the Edo period and does have samurais and ronin, but it doesn’t focus on the battles. Its genre is drama and is more of a character story that happens to be set in the Edo period. There is little to no violence and nudity in this anime. That said, I highly recommend you give this show a try. And if you need a little convincing, then here is the review:

If you decided to read the summary of this anime before watching it, it would give you a first impression. The basic plot is straightforward and really doesn’t come off as something interesting. In fact, the first two episodes are prolonged. And if you keep on expecting something drastic to happen and things to take a major turn, then you will be disappointed yet again. The plot is simple and what you see is what you get. However, if you managed to keep your expectations in check, you would find a really well-written drama with a very realistic story.

The story follows a samurai, Masanosuke, who is very timid despite being a skilled swordsman. He encounters Yaichi, a charming man who is the leader of a group called Five Leaves. It is a very laid-back show, and it focuses solely on the characters and the setting. Having seen many samurai shows, I can confidently say that none of them captures the Edo period’s feeling like this one. Instead of following wandering characters who move from town to town, we follow a group of deeply connected characters to Edo city. It brings them all together.

The show takes its time. And makes you familiar with the lifestyle of the characters, and the places they live in. Here the Edo period isn’t just there for giving characters a reason to swing swords. It tells a more personal and realistic story. Nothing is overdramatized, and things are presented the way they are, and it feels raw because of that. Anime tends to overhype even the most basic emotions, which makes the story more fun. Here that’s not what this anime is going for. 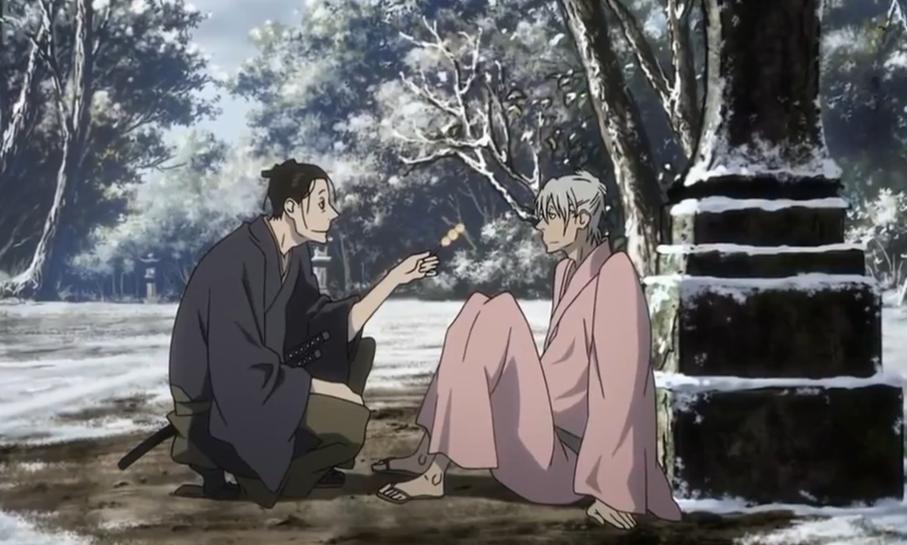 This anime is absolutely gorgeous and is the reason why the setting feels alive. There is just so much detail in the environment, and the way the characters move feels satisfying to watch. The show doesn’t shy away from using colors where it is necessary. Each place is distinct from the other. The house’s peaceful vibe is located in the outskirts of the town, the cramped up shop where all the characters gather, the brothel streets illuminated by the red lamps, and the busy overbridge in the towns sprawling with citizens. All these places have a distinct feel to them and set the mood of any particular scene. Even the way characters are drawn so much about their personality. Each one of them moves and acts the way you expect them to and in a way that complements their character.

Part of the reason why they feel so real is the excellent voice acting. Every single word uttered by the characters has some weight in it. To clear things up, I am talking about the Japanese dub here. And most of the anime has quite similar voice acting. There are a few exceptions where the voice acting turns out to be good and unique; take Beastars, for example. I am not saying that every anime needs to have somber and super realistic voice acting. It just needs to fit the theme, which has that balance. And then there are the incredible soundtracks, they fit the setting perfectly, and each one of them is memorable.

This anime is beautifully animated and is accompanied by some of the best soundtracks I’ve ever heard in anime. The animation breathes life into the setting, and the characters, and the voice acting, help evoke emotions.

Then there are the characters. They are the reason why this show is so endearing. Each one of them feels like a real person. I know I say this a lot, but anime has always been good on this front. This medium has us the most memorable characters ever, ranging from absolutely ridiculous to unquestionably realistic. And this anime delivers as well. Each one of them has a distinct personality and does not fall under any trope. The plot mainly focuses on the five members of the “five leaves,” but the show doesn’t shy away from developing the side characters.

I cannot describe how satisfying it was to see the characters develop so much in mere 12 episodes. The writing here is top-notch. I also don’t want to talk about them anymore because they make this show great and the reason I watched the show.

If you are a fan of slow and well-written realistic dramas, then this anime is perfect for you. Some of you might find this show slow and might end up dropping it after an episode or two. And it’s also not like the show changes drastically in the middle, so if you don’t feel entertained in the starting episodes, this might not be the anime for you. It is a very laid-back show and takes things very slowly. However, I loved this anime; the impressive animation, the excellent voice acting, and the lovable characters really made this show fun for me, and I highly recommend you check this one out.