Blood of Zeus is the new Netflix anime by Powerhouse Animation, the same studio which made the Castlevania Anime. It consists of 8 episodes, and all of them were released on Oct 27th on Netflix. Honestly, I am not even sure if we can call this an anime. Since it wasn’t made in Japan, the source material is not Japanese. Other than the art style, there isn’t anything that follows the typical anime format. If you consider Avatar to be an Anime, then this American show is anime enough. I will treat it like its own thing, though, since this studio is trying to carve out its own identity and is doing things a little differently.

Blood of Zeus tells the story of Heron, another son of Zeus who surprisingly isn’t Hercules. I was under the impression that this would be another retelling of the story of Hercules. But Heron is a new character, and the story is different as well and the 8 episode structures don’t work for me. The show rushes a lot of things yet fails to tell anything significant. The story is not the strongest point of this anime. I don’t know how much it takes from the actual Greek Mythology, but I felt very by the book. It is serviceable at best. It is not an absolute joke like the Dragon’s Dogma anime, which just wasted my time and felt half-assed. Here the narrative does a few things well.

Due to the short structure of the anime, it doesn’t waste much time. The narrative is always moving forward. It does feel a little uneventful, but at least it knows that there isn’t much to linger about anyways. Is it predictable? Yes. Is it boring? No. Characters are abundant, and the anime feels the need to establish as many as they can. It introduces the gods and the locations and keeps on telling more and more stuff about greek mythology. And that part is entertaining. The way it is delivered comes out of nowhere, though in some cases.

Some of the stuff is told through big exposition dumps, and major plot points can feel forced and predictable. Characters appear in places out of convenience. But the show is based on such a narratively rich mythology that it makes up for the subpar story. However, to this shows credit, it did manage to keep it hooked till the end. 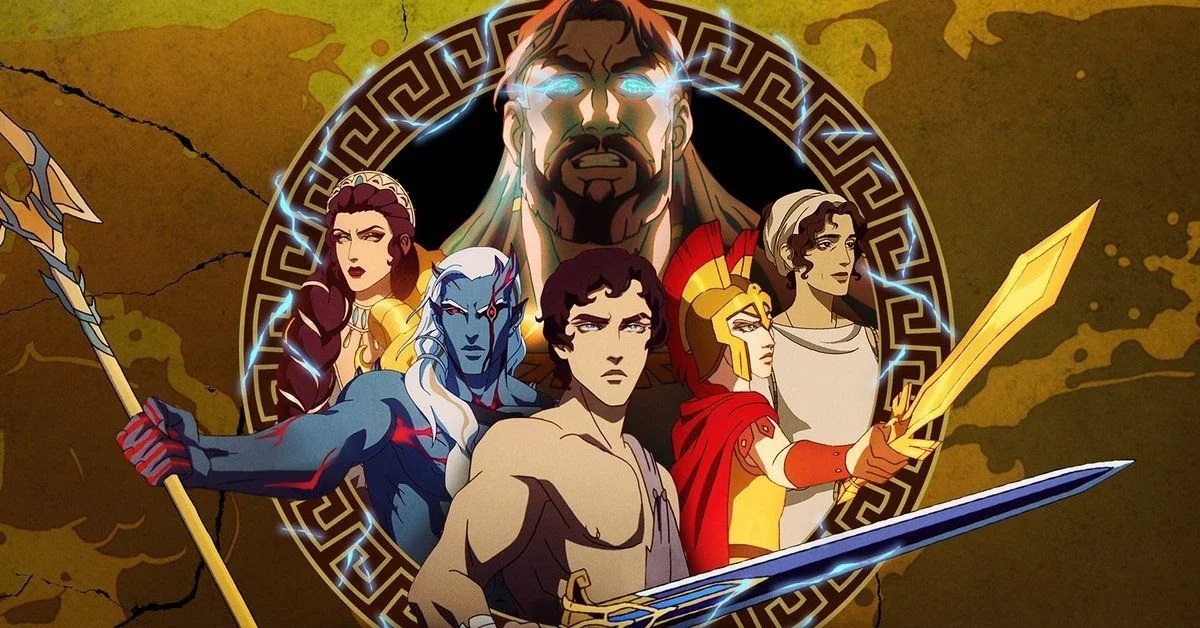 The animation of this show is what shines the most. If you have seen Castlevania, you know what to expect. If you haven’t, then go and watch that show. It’s way better than this one. However, it is not perfect, some scenes where the background stuff feels like it’s moving at 4fps. And sometimes, the characters look out of place. But that doesn’t happen often, and what I said can be dismissed as a nitpick. The animation, the way each landscape is drawn, makes the place feel alive. But what stands out the most is the action sequences.

The story might be a bit dull, but it does a great job of throwing one action scene after another. The anime doesn’t shy away from violence. All the decapitation and brutality are shown in all their glory. The last episode only had the impact it was going for because of the animation. It’s quite rough around the edges, but the fights are well choreographed and are pretty enjoyable. I wasn’t invested in the story that much, but the animation made it worthwhile.

The soundtrack consists of generic fantasy music. It’s like any other show of its kind. It does the job, but none of them were memorable enough for me. As for the opening, it’s the same.

They were pretty forgettable to me. Surprisingly the character I liked the most was Zeus. This is maybe because he is voice-acted by the same guy who plays Batman’s role in the New-52 DCAU movies (Batman was the only thing new-52 got right). Or maybe because the show actually acknowledges how Zeus can’t keep it in his pants. The show portrayed him more like a human than an almighty god. And it was kind of refreshing seeing him as the good guy once in a while.

Heron is, as I said, pretty forgettable. He has a generic hero personality for most of the show. Sometimes, he acts like a different character and develops a trait in mid-episode out of thin air. The same goes for the supporting characters. Though the female lead, Alexia, is quite interesting.

The rest of the “gods” were also enjoyable. Since the show is based on such grand mythology, it is bound to have some interesting characters, even if they are not developed. Like, Hermes and Apollo. The show stumbles when it comes to the original characters. Both the MC and the main villain have their motives all jumbled up, and all the confrontational moments between them feel forced. They have no weight and feel generic.

So to sum it up, this show has a predictable and unoriginal story. Good Worldbuilding, beautiful animation. Slick action scenes. But lackluster Main characters. The gods are pretty fun to watch, though. So overall, it was a pretty mediocre show, which was still enjoyable. I don’t see myself watching again. The story is complete in itself and leaves many things open-ended; there can be season 2. Watch the first episode; it will give you an idea about what kind of show this is.