Miyuki Shirogane and Kaguya Shinomiya are at the top of the student hierarchy at Shuchiin academy, a school for the elites among elites, acting as the president and the vice president of the student council. Both are incredibly talented and hard-working. Do they like each other, you ask? Heh, as if. But they wouldn’t mind considering dating if and only if the other person asks first. Therefore, all they need for a “happily ever after” is for one of them to confess their feelings, right? Only if the things were so simple, both of them are too proud for their own good. Therefore, now they battle each other to make the other one confess their love.

Love is indeed a war, and whoever confesses their feelings first loses.

You must have heard the phrase “Everything is fair in love and war”, see it come true in Kaguya-sama in its most brutal form as here we are dealing with both love and war. Both of them are ready to go all out without holding anything back to win this war. Whether it is abusing their power, position, or money, everything is fair in this battle of wits. Above all, the back and forth between Shirogane and Shinomiya is an absolute delight to follow and funny as hell. For instance, you would be surprised to see how much planning and plotting goes behind something as simple as a movie date or exchanging contact information.

The ever so cheerful and bubbly, part-time rapper, teacher, “love detective” and spoiler of schemes, Secretary Chika Fujiwara, along with the always gloomy and negative, the ultimate man of culture, Treasurer Yu Ishigami, complete the student council along with Shirogane and Shinomiya.

What started as a battle of love between the top dogs of the school evolved into much more over time. As the story progresses, more and more recurring characters are added to the roster with their own set of quirks who each get their time to shine so that you can fall in love with them.

You will love the interactions between the characters, especially the members of the student council, whether it is them trying out a new game or trying to solve various problems for fellow students, you won’t ever get bored.

The comedy is on point. Kaguya-sama doesn’t break clichés, instead, it bends them and makes fun of them. You will see your usual rom-com tropes in the show, but the execution is so well done that you won’t ever feel that this is just another show in the overpopulated genre. Overall, the show is wholesome and filled to the brim with fluff. But it’s not all love and laughs either, it can be pretty sad and emotional when it wants to. 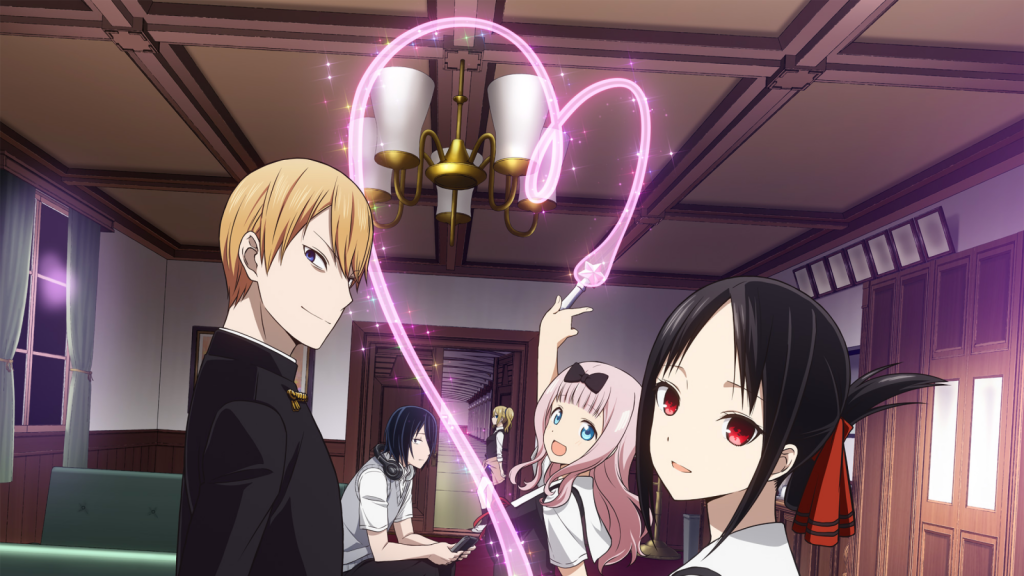 Being a manga reader, I was a bit worried when the anime adaptation was announced as in the wrong hands it could have been horrible, but I am happy to say that the staff behind Kaguya-sama has done the manga justice. In other words, the animators have done a pretty good job of realizing the manga in the anime format. The animation is visually striking and fluid. The music is also fairly well done.

Above all, the voice acting is top-notch. All the voice actors are talented and perform their roles with absolute brilliance. But, when you talk about Kaguya-sama, you gotta give a special mention to the narrator. More often than not in shows, narrators are someone that is just there without much purpose other than stating the obvious, which is not the case with Kaguya-sama, the narrator feels like an individual character without whom I can’t imagine Kaguya-sama.

My one complaint with the adaption, though, is that they simply don’t cover every chapter of the manga. While I can understand why they wouldn’t want to cover each chapter, I am concerned if that will bite them in the back later on as many minor plot lines return to be a major part of the story. But I am sure the staff is consulting Aka and are competent enough to consider everything before making these decisions.

Kaguya-sama is a breath of fresh air for anyone tired of always watching the same generic execution of the genre that is romantic-comedy. So, watch Kaguya-sama and once again fall in love with romantic comedies.