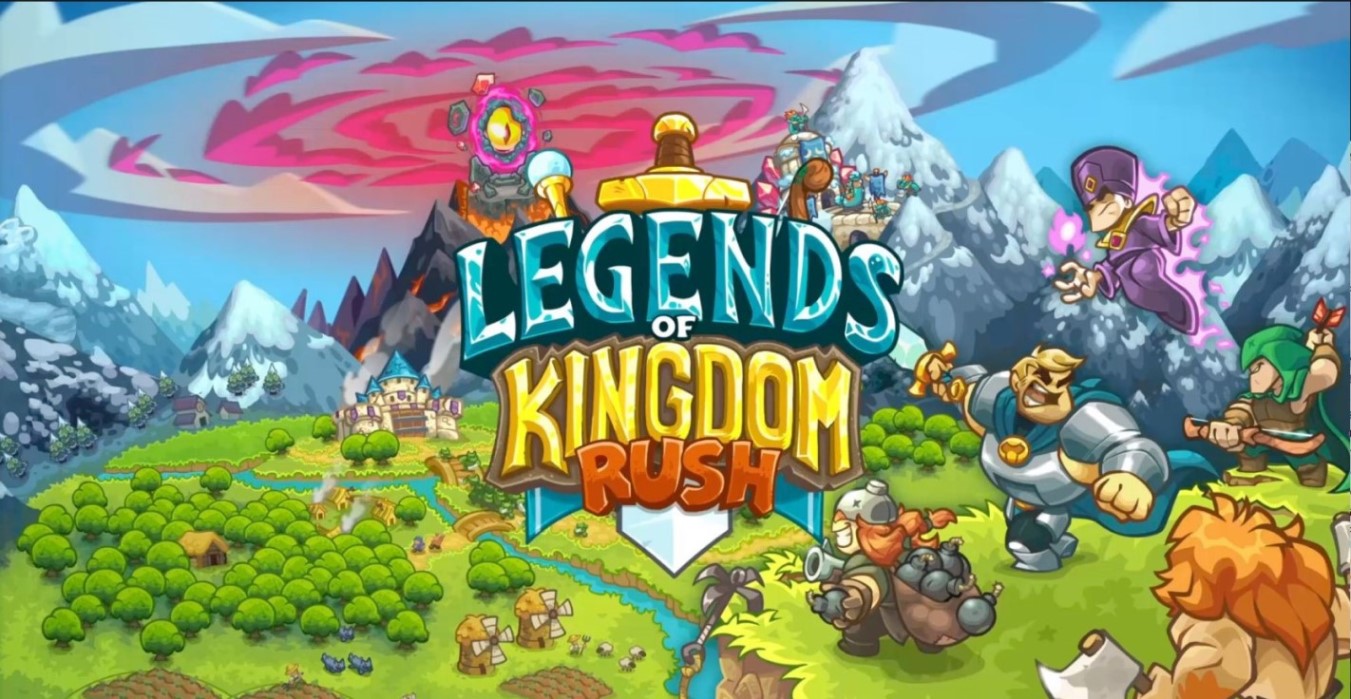 I am an avid World of Warcraft player and have spent thousands of hours leveling through the hills, caverns, and castles of Azeroth. It is the game I spend the most time playing on a day-to-day basis, but apart from Blizzard’s MMO, I have played the Disgaea series almost just as long. As an enormous fan of strategy RPGs (SRPG), I understand the nuances of positioning, analyzing enemy moves, and countering their efforts to swiftly bring about their demise. Fluid battles are what make an amazing SRPG, and I had high hopes for Legends of Kingdom Rush, another offering in the Kingdom Rush franchise recently available on Apple Arcade.

Legends of Kingdom Rush opens with vibrant art, and a lone warrior, preparing for yet another battle, as he attempts to explain the basic controls. Move…wait…move with the left…stick. After 25 minutes of trying to get my PS5 gaming controller to sync up through Bluetooth, I eventually had to ditch it, and move to the touch screen controls. The odd thing is that the on-screen instructions recognized my controller, it was properly paired with my iPad, and it works in all the other apps. I am not sure if this is a bug, or just not fully implemented yet, but it kept trying to instruct me on how to use the controller to operate the game.

After the lengthy reprieve from combat, I finally abandoned my efforts to use the controller and moved back to the touch screen controls. I must say, despite my initial resistance, the touch screen controls were much more accurate. The controls are straightforward and the abilities are easy to understand, for an SRPG it is definitely approachable…until it’s not. For someone who has maxed out characters in Disagea (level 9999 per character), I wasn’t expecting a lengthy story with amazing dialogue, but I was expecting to ascertain specifically where I made my mistakes in combat, and remedy those in the next to go round.

The level-up process and upgrades are simple and streamlined, and the story is told in a comic book style and does little to detract from the combat at hand. In your first few levels, you are introduced to the varied character classes from the original Dungeons and Dragons character tropes, which really just become ranged or melee abilities (Warrior, Mage, and Rogue or Hunter). I easily dispatched enemies in the first 10 levels by employing a simplistic tank blocking strategy. To put it simply, you always position a tank (a character designed to take damage) in front of your ranged or damage characters, to soak or absorb the enemies’ attacks. By keeping the tank characters in the path of the enemy characters, it protects your entire team. 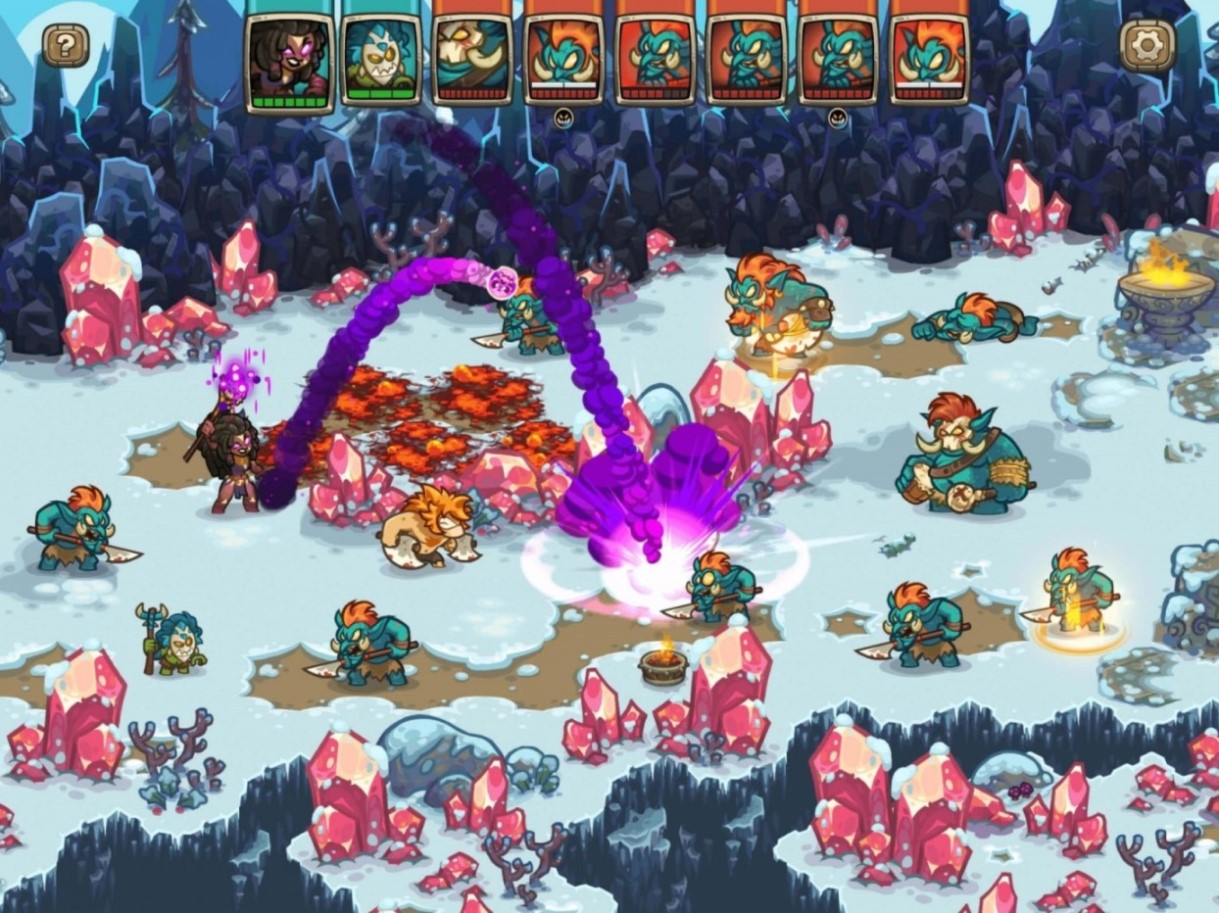 A chaotic battle scene from Legends of Kingdom Rush.

This is a tried true approach to a typical SRPG. But typical this game is not. Legends of Kingdom Rush is presented as a rogue-lite experience, but that connotation holds little value here. Simply put, this game is unfair. Not ridiculously difficult, or enemies are overpowered; there are simply too many of them and not enough skills in your arsenal to be successful. You start out each map by selecting from three characters, however, you are limited in what you can bring.

The game does little to explain this, but the characters are separated into two groups. First are the characters that have real names, like Gerald or Bruxa, and they are seen as the leader of your party. From there you may select two other characters from the generically titled characters, and begin your journey. Throughout the map, you will pick up one additional character, and this is where my major issues with the game begin. Multiple times on the loading screens, we see references to selecting the correct team is the most important part of the game. I don’t know why they made this a priority when the game does not give us total control of our team.

The whole “rogue-lite” elements don’t resonate with me at all. Rogue games and rogue-lites emphasize our choices, and the magnitude they have upon our game. Rarely did I feel like my choices truly mattered. Each map starts your characters at level 1, so none of your progression from previous levels (apart from experiencing the story), benefits you in later levels. The only perks we get from leveling is opening up separate abilities for the characters, but nothing that would help us alleviate the pain of one attack from an enemy. Multiple times I started a map, and before I had my turn, the enemies already had the upper hand. This isn’t a strategic play, it is forcing you to restart, with no apparent benefit.

Often times I was so overwhelmed by enemies, I had no way to turn the tide of battle. The times I felt that I made a great strategic play, it was often undermined by the starting position of many of the troops, or their egregious starting health. There are events that happen during our traversing of the world map, and although they provide a different story, there was again no way for my choice or influence to affect those moments, and when those moments took away health, it further leads to frustration of not being successful.

I felt that in my 100 plus games, only once did I make a mistake that cost me a battle. Apart from that, I was a victim of circumstance, or the game’s inability to let me prepare for events. There were too many RNG elements at play, from the dice events to the overall lack of healing options (you get on average three heals per map, and with zero healing characters by map three, seems like you can not take any damage to actually beat the bosses).

This combined with the lack of equipment in the game feels cheap. Gear could have greatly affected my character’s stats and combat prowess. It’s almost as if we had to be fortunate to get a good map to be successful. Claimed to be a rogue light, but it’s not – it’s just a grind fest, where we keep throwing bodies at the levels until you pass or restart, and try again. A rogue light is where a mistake affects gameplay, but when the computer just overmatches us, those aren’t mistakes, it’s just poor game management. 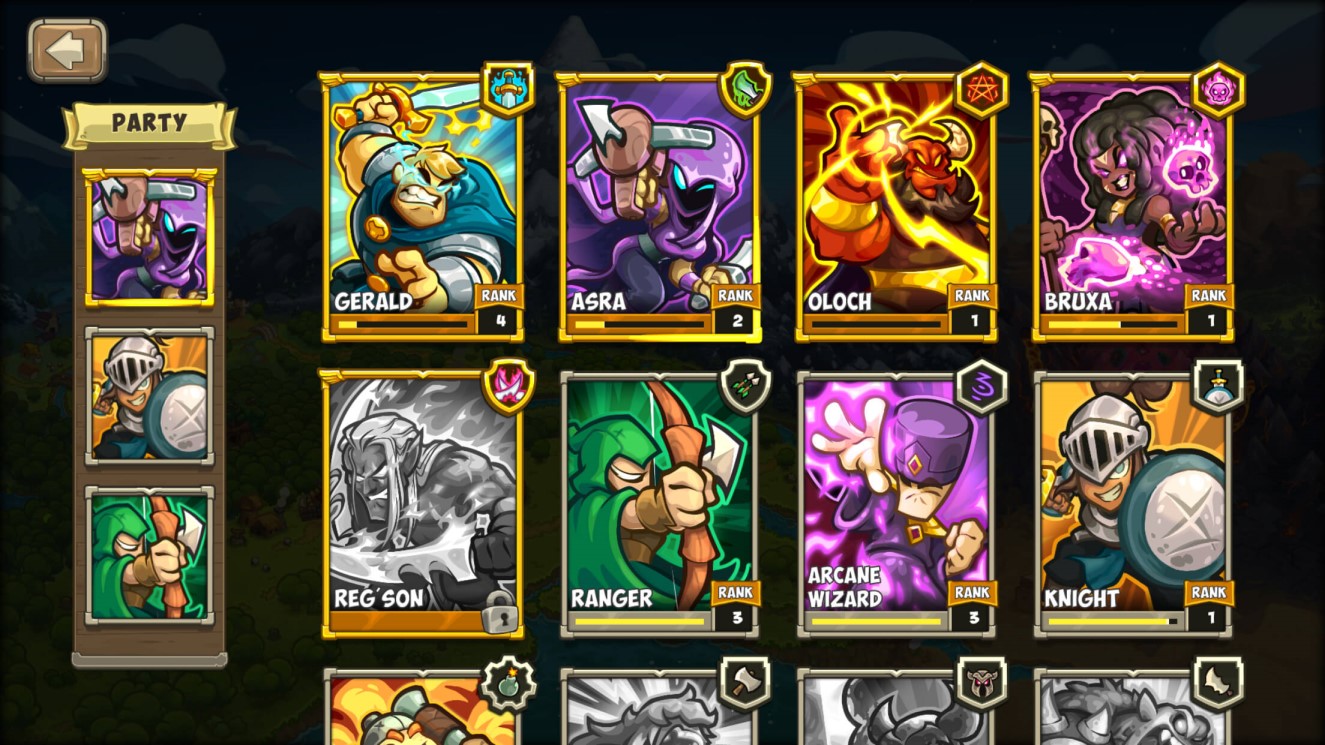 The list of characters that you can somewhat select from.

The story in and of itself is interesting, but feels too much like World of Warcraft (Old Gods and Gul’dan), and has no bearing on the gameplay. What I really struggled with was being thrust into a map, and feeling like the odds were already stacked against me. The inability to weave abilities and placement to strategically dominate my opponents felt cheap. It leads me to think why, why design a strategic game ultimately devoid of strategy, and call it a rogue-lite?

Inevitably I felt that this game was designed as a game with In-App purchases and that the purchases would have empowered your characters to avoid the pitfalls of poor game design. If the developer tweaks some of the mechanics or allows progression to influence our characters, this is definitely a game I would revisit. Until then, I will go back to maxing out my characters in Disgaea (which happen to be included in the Steam Summer sale).