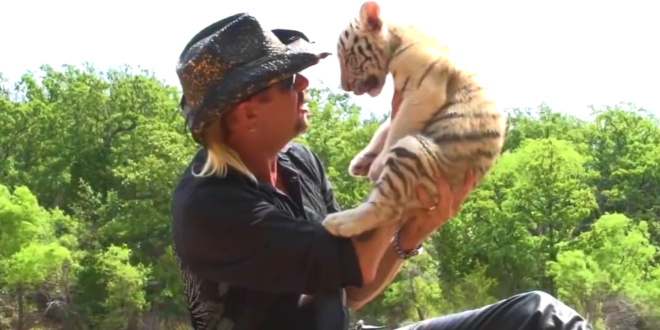 Netflix’s upcoming true-crime documentary series Tiger King will be releasing soon, and fans are extremely excited to see what the team has in store for them. A lot of new rumors and speculations are circulating the internet, and to save you the trouble, we have gathered all the recent updates and information regarding the documentary series, so here is everything you need to know about the upcoming Tiger King on Netflix.

The upcoming documentary series will be extremely fascinating, and it will keep the fans on the edge of their seat throughout. The bone-chilling life of Joe Exotic will be documented in the upcoming series, and Netflix is gearing up to release as soon as possible. Fans who have heard about the stories will know what kind of a man Joe was, and now, that it will be portrayed in the form of a series, the expectations are pretty high.

Who is Joe Exotic?

A little background in case you aren’t aware of Joe Exotic. Joseph Maldonado-Passage also is known as Joe Exotic was born in 1963 in Kansas, and he gained worldwide popularity by serving as the manager of Oklahoma’s Greater Wynnewood Exotic Animal Park, and he boasted himself as the most popular breeder of the big cats, however, his show was soon heavily criticized because of some of his practices.

After some time, Exotic went onto having some serious trouble with Carole Baskin, CEO of Florida’s Big Cat Rescue Wildlife Sanctuary, following which he swore to take his revenge on him. Later in 2018, Exotic was charged for several murders and his horrific practices on animals where were considered serious crimes.

What is the Plot of Tiger King?

The upcoming documentary series of Netflix will focus on the people and Exotic who have a serious past of animal abuse, especially the big cats. It will mainly focus on Tiger King and will revolve around his life from being at the top at some point to ending up in prison for 22 years for his crimes.

The show will be a ‘7-part documentary about big cat owners in the US, murder for hire, polygamy, country music and politics’ with numerous twists and turns, so fans will have to be very vigilant while watching the show, and according to the official note, Tiger King will describe how ‘the only thing more dangerous than a big cat is its owner.’

When is the update of Tiger King?

Tiger King will be released on 20th March 2020 on Netflix, and it will be consisting of 7 episodes.