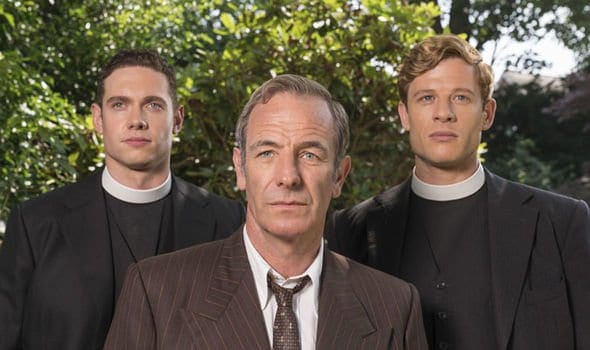 The crime-fighting vicar show airs on ITV and is one of the better performing TV shows on the same right now. James Norton made his final appearance as Sidney Chambers on the show on Friday 11th January 2019 at 9 pm. Fans don’t know for sure how to react to that. Sidney played God’s own man who has a penchant for solving crimes. So we give Norton a chance to move forward, but what about the rest of the show, how does it figure? Keep reading.

The plot of Grantchester is a period drama that deals with the story of a village in the 1950s by the same name. Sidney Chambers helps detective Inspector Geordie Keating (portrayed by Robson Green) in the show. The very first series of Grantchester was based upon the six-story collection from the first book, Sidney Chambers and the Shadow of Death that aired long ago in 2014.

Fans were left in tears when Sidney Chambers took his exit from the show. Tom Brittney will try and fill in Sidney’s shoes. What pleased fans the most was the fact that Sidney’s departure was very well written out. He was thrown into a whirlwind romance with an American girl named Violet. This exit was portrayed throughout episode 1 and episode 2 of season 4. This, in turn, led him to leave the Cambridgeshire town forever for the USA. Here check out Norton’s exit message below:

Sidney was shown going for a journey across the Atlantic to meet up and spend the rest of his life with Violet and her family. He wrapped his affairs and said a teary goodbye to Detective Inspector Geordie Keating at their spot in the pub. Now that that’s all wrapped up, the primary task will be to see Brittney’s character William Davenport begin at the office.

Grantchester airs every Friday at 9 pm on ITV.

The has completed its UK run, and now we are going to see it on MASTERPIECE on PBS in the United States. The UShas been set for 14 July 2019 at 9/8c PM. So, now American fans will be able to see the much-awaited show, but still, they have a few months to wait.