Zack Snyder is on a constant hype and regular with teasing and giving updates on all the projects he has been up to, especially the upcoming revisioned version of 2017’s Justice League, which he has shot on fans demand and will be arriving on HBO Max. Apart from that, Snyder has also given a preview on another project of his titled “Army Of Dead,” which is not only going to be just a movie but also a full franchise involving a prequel four-part anime series. While the movie is set to come later in 2021, Zack Snyder recently sat on an interview and shared some images, and gave a preview of what the movie looks like. Zack Snyder movies usually prefer a lot of visuals and spectacle as superior; this time, according to the director, the movie and the four-part anime will be full of warmth and emotions.

Army Of Dead is a Netflix original zombie heist film directed by Zack Snyder, which will feature a group of mercenaries who devise a plan to attempt a heist at Las Vegas Casino during a zombie apocalypse. Here we are decoding everything director Zack Snyder had to say about his upcoming Netflix original movie, its prequels, and the four-part anime that will be followed in an interview with Entertainment Weekly.

Zack Snyder On His Upcoming Netflix Franchise “Army Of Dead”

While Zack Snyder is already busy with his upcoming highly anticipated Justice League‘s Director Cut, he hasn’t stopped working on his other projects. The director, who is known for amazing spectacular visuals, recently sat on an interview with Entertainment Weekly and talked about his upcoming franchise called “Army Of Dead,” which will also consist of a prequel four-part anime series that is set to arrive on Netflix. Zack Snyder talked about how the movie is full-blown Zombie mayhem and a lot of in-depth emotions included and shared a few pictures to give the fans a glimpse of what it may look like. 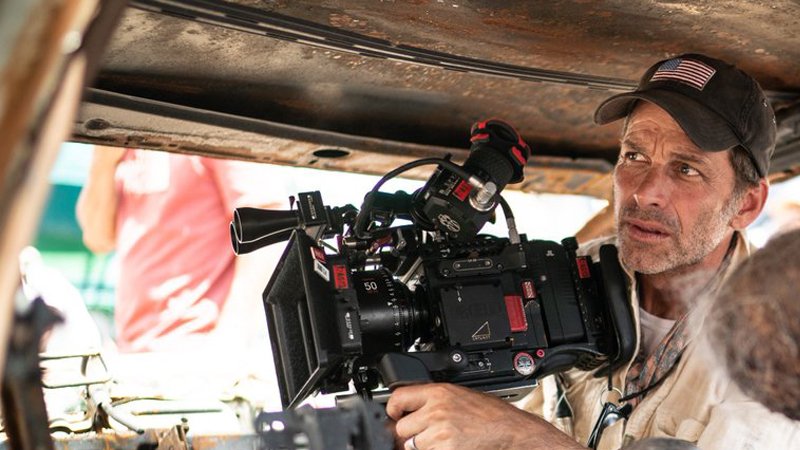 While talking to Entertainment Weekly, Zack Snyder quoted that movie is a full-blown, balls to the walls zombie heist and genre on the genre in a great way. Snyder stated that if the audience expects zombie mayhem, they are getting 100% of it from the movie. On the other side of the zombie massacre, the director also promised that the movie consists of many amazing characters, and their journey will surprise a majority of audiences because of the in-depth warmth and emotions associated with them.

The New Plot, Idea and Of The Movie

Zack Snyder continued and offered some more plot details on how the movie will revolve around the Las Vegas Casino. Basically, all the zombie-outbreak movies start with the world getting infected with a supposed virus and follow the world into a fight for survival. Here in Army Of Dead by Zack Snyder, it seems like the movie’s main focus will be on Las Vegas. Zack Snyder also claimed that the arrival of the zombie virus would be associated with Area 51 and the government building a wall to safeguard people. The act leads to a huge amount of cash in Las Vegas left free for taking in. The movie will see Dave Bautista as Scott Ward, who will lead a band of thieves to the Casino as they plan to attempt a heist while also fighting the zombie hordes and barricades set between them and the money.

Zack Snyder revealed that the idea was kept on hold for years by Warner Bros. until Netflix picked it up and quickly showed interest in it. Snyder stated that probably Warner Bros. didn’t want to spend that amount of money on a Zombie film, or probably the studios weren’t just interested in this idea. On the other hand, Snyder revealed his pitch to Netflix, especially the head of Netflix’s original films Scott Stuber. Zack Snyder remembered that he mentioned the scripts and the main idea, and Netflix was like, “That is the movie; go quickly make it.”

Zack Snyder revealed that Netflix was so invested in the movie that they even agreed to fund for the four-part anime that will be a prequel showcasing the virus’s origins that caused the outbreak in the original one. Snyder claimed that he had gone very deep in making this and explaining how the virus was born as he said that the whole cast of the original movie would also be returning to the anime and Christian Slater as the bad guy.

Related: The Best Action Films To Watch On Netflix That Are Worth Your Time

Zack Snyder especially wanted Dave Bautista to star in his upcoming zombie heist franchise, but the actor initially turned down the role. Dave Bautista, who is known for his very kind-hearted Drax from the popular Marvel Franchise Guardians Of The Galaxy, for the last few years, has been open about his wanting to pursue a more character-driven role and in-depth roles. Dave Bautista initially declared the role, saying he wasn’t interested until he read the script. According to Bautista, after reading the script, he found many layers and depths in the character he was offered. He also wanted to work with Snyder one day or another and thus agreed to star in Snyder’s upcoming zombie heist franchise.

Cast and update For Netflix’s “Army Of The Dead”

In April of 2019, Dave Bautista had joined the cast, followed by Ella Purnell, Ana de la Reguera, Theo Rossi, and Huma Qureshi in the may. The casting continued with Garret Dillahunt, Raúl Castillo, Omari Hardwick, Chris D’Elia, Hiroyuki Sanada, Nora Arnezeder, Matthias Schweighöfer, Samantha Jo, and Rich Cetrone joining in the following months. Tig Notaro joined the cast in August 2020, replacing Chris D’Elia, who was cut from the film regarding his accusations of sexual misconduct. Notara was added in the film with a combination of reshoot using an acting partner on the opposite and some digital compositing that added her into the scene.

Though Army Of Dead has wrapped up their shoot, the update by Netflix hasn’t been announced yet. We will keep you updating about the further details on the upcoming zombie heist franchise by Zack Snyder; till then, stay tuned for more Entertainment related news at Otakukart News.