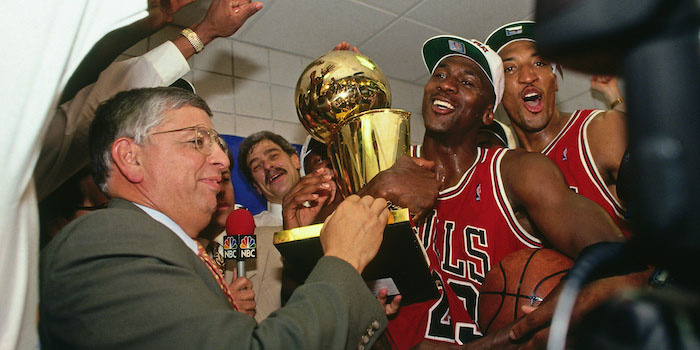 The sports documentary miniseries The Last Dance will be releasing very soon, and fans of Michael Jordan are extremely excited to see what the team has in store for them. A lot of new speculations and details have surfaced up, and to save you the trouble, we have gathered all the recent updates and information regarding the documentary miniseries, so here is everything you need to know about ESPN’s upcoming The Last Dance featuring Michael Jordan.

What are the latest updates on The Last Dance?

According to the latest updates, the upcoming documentary miniseries will be very interesting and fans will be highly entertained throughout the season, and in these hard times where people are locked in homes, it will definitely cheer you up. The series was already in talks way back since 1997, however, the official confirmation from ESPN came in 2018, and later in December 2019, they dropped the trailer of the much-awaited documentary miniseries.

According to the more recent confirmation, the official update of the series has been moved up, and given the current mood of the world, it was a great move from ESPN, and fans all over the world are rejoicing the fact that they will be able to enjoy the documentary after a few weeks. Recently, a fan tweeted to ESPN and asked if they can move the update earlier, as around 3 billion people are stuck at their home due to the Coronavirus pandemic.

ESPN listened to fans and gave them what they wanted, and they moved up the documentary miniseries from June to April. LeBron James reacted to this and responded with the tweet ‘April 19th can’t come fast enough. I CAN NOT WAIT!!’

What will happen in The Last Dance?

The Last Dance will focus on the team of Chicago Bulls of the 1997-98 season, and it will feature the film made by the crew who had access to Chicago Bulls in the NBA 97-98 season. The documentary will be a bit emotional as Michael Jordan bid farewell to the team after the season. The documentary will feature a lot of unseen footage of the team and Michael Jordan and how he spent his final days with the team.

How many episodes will The Last Dance have?

The Last Dance will feature a total of 10 episodes, and all of them will be directed by Jason Hehir.

When is The Last Dance update?

The Last Dance will be released on 19th April 2020, and it will run till 17th May 2020. The episodes and their updates are as follows: