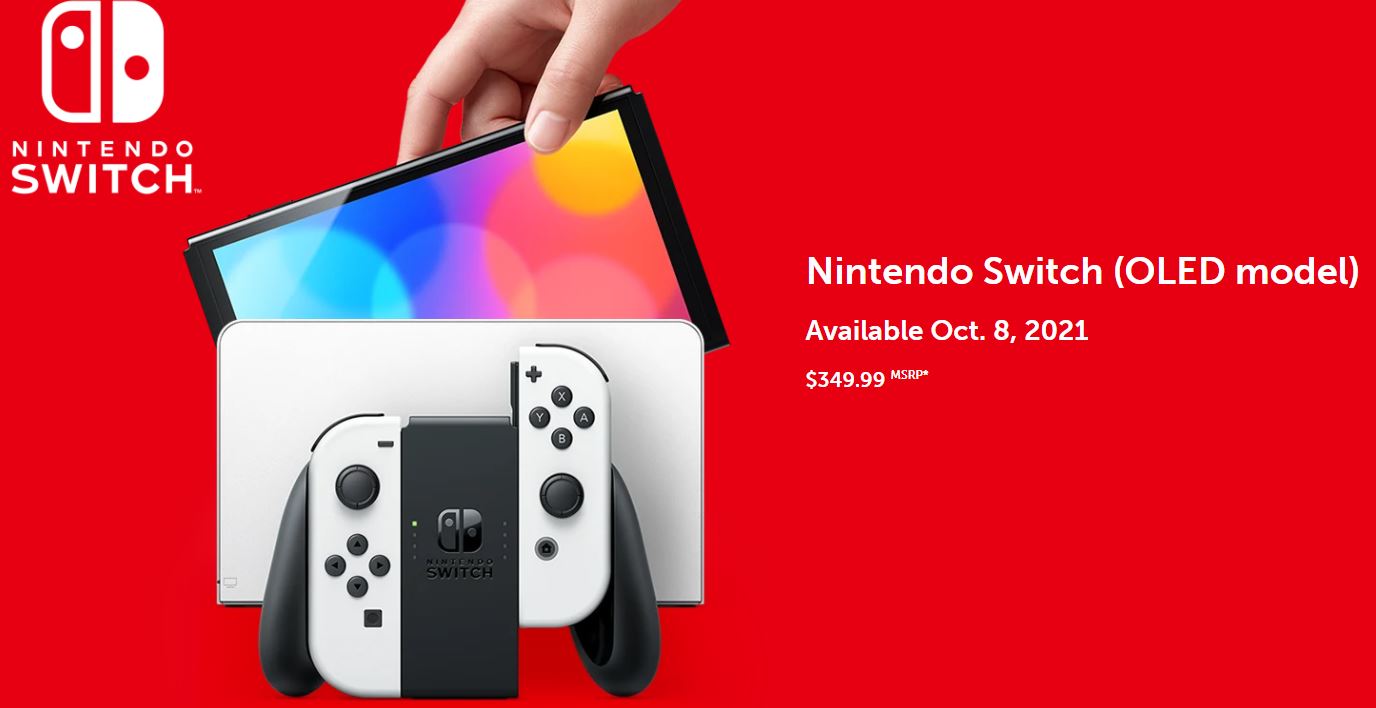 I don’t know about all of you, but this has been one of the busiest weeks in video games for me, with balancing game time, World of Warcraft’s newest patch (Patch 9.1) and subsequent Blizzard Summer Sale, the Steam Summer Sale (thanks Valve for emptying my wallet), and a bevy of Apple Arcade releases, I have been writing and reviewing at a break-neck pace, with little time to come up for air. Fresh off of E3, after months of rumors swirling around the interwebs, Nintendo officially took back summer with the announcement of their newest Switch console. The Nintendo Switch (OLED model) doesn’t have any differentiating moniker; it simply is being dubbed the OLED model. I am sure at some point we will have a snarky acronym, but for now, the Switch OLED has been announced to release on October 8, 2021.

Calling your local retailer will prove fruitless, as no preorders have been made available at this time but should be in the next few weeks. The current listed prices for the console, one controller, and a docking station are listed at $349.99 MSRP. They had the traditional matte blue and red controller with a black docking station and have created a clean white version on both the controller and the docking station. It is the first time Nintendo has gone with a white console since its inception back in 1986 and is definitely the one I will be preordering.

The first noticeable difference is the increased screen on the new OLED model. They have increased the size from 6.2-inches to 7-inches, and although this doesn’t seem like a huge difference, it is an increase while still allowing for portability. This is crucial because the system was created with dual functionality and needs to keep that ability for gamers to play on their televisions and still carry it around. The second most noticeable physical change is the expanded stand, which ditches the miniature rectangle “kickstand” for a screen-wide stand that shouldn’t snap off as easily as the previous incarnation. They have also allowed for multi-angle support, rather than the traditional one angle as the previous stand allowed, and can be adjusted. 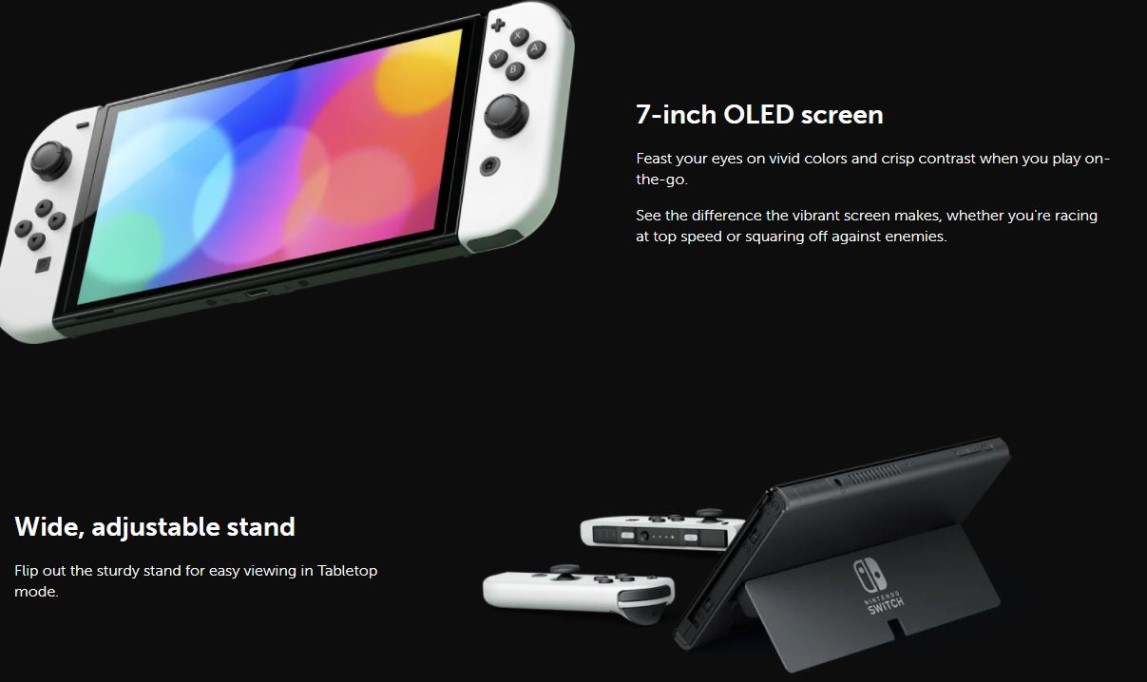 Some of the new physical differences in the new Nintendo Switch (OLED Model).

On the dock itself, they have a built-in wired LAN port to allow for wired connections to improve quality. For a mobile device, this is amazing because we can simply hook the Switch (OLED Model) into our internet modem and update any games we need to. On the inside, they have increased the internal storage from 32GB to 64GB, which is a slight improvement. The Switch OLED does allow for SD cards still of up to 2TB, but this still feels like a wasted opportunity. I still don’t understand Nintendo’s insistence on not including more onboard storage. iPad models come in sizes starting at 128GB and increasing to 256, 512, and then ultimately one and two terabytes, respectfully.

I am still left feeling why I didn’t Nintendo really blow the lid off of this and offer a myriad of improvements? Why make this a minor refresh at best? Why not take this opportunity to redesign the entire internal structure? The console is a tad heavier at .71 pounds (as opposed to .66 pounds), so the extra .8-inches in screen size did not increase the weight by any noticeable difference. They improved the audio to coincide with the newly minted Tabletop Mode, which is another reason behind the larger stand (the kickstand is forever retired), so that should excite some gamers. Of course, we are all excited and will purchase the newest Nintendo offering, but what does this say about the company long term? They no longer have separate portable and home console offerings, and I feel like this is Nintendo not connecting with customers. Customers want more. More screen size, storage space, and options. This feels like the bare minimum they could have squeezed out of this endeavor. Does this mean that when this version falls behind other offerings, we will get another refresh?

A little over four years ago, Nintendo released the Switch, at a time when high-definition consoles were in full swing, and then the console lacked some of the graphical prowess the consoles at the time lauded. PS4 and the Xbox One S both could run at 4k, while the pedestrian Nintendo Switch was barely able to produce 1080p (in handheld mode, this is downgraded to 720p for improved battery life and screen capabilities). It is now baffling to me that they still have yet to increase the graphical fidelity of the system. It would be like buying a four-year-old iPad and only replacing the screen, not the processor, RAM, or graphical output. I always feel like Nintendo is creative enough to use their ingenuity to eek out all the processing and graphical fidelity of a system that they can, and they have found creative ways to make graphics look sharp and crisp. It is rumored that they have upgraded the video card to a newer NVIDIA model, but are we simply only getting 1080p on the handheld device?

Rather than relying on this, why not make an equally impressive technological marvel to really make the games shine? I am not thrilled with Sony’s dealings with indie developers or their reluctance to support cross-play (Borderlands 3 is such a missed opportunity, more on that article later), but after playing Ratchet and Clank: Rift Apart, I have been marveling at the vistas, swampy marshes, and outer reaches of space in awe. The locales are so gorgeous; it further enhances the experience, rather than Nintendo titles being great in spite of less than amazing graphics. We will definitely get more information in the upcoming weeks and months, and of course, strive to have some hands-on time with the console, but for my money, an 8-inch screen, 1TB of storage, and enhanced graphics would have made this the system of the generation. Per multiple reports, both the CPU and RAM in the OLED model are identical to the original release. But maybe I am missing the point, maybe Nintendo is trying to keep costs down, and I can definitely respect that. But I still have this nagging sensation that a simple refresh is good enough for Nintendo, but they could have done so much more. I think Nintendo is banking on that fact.