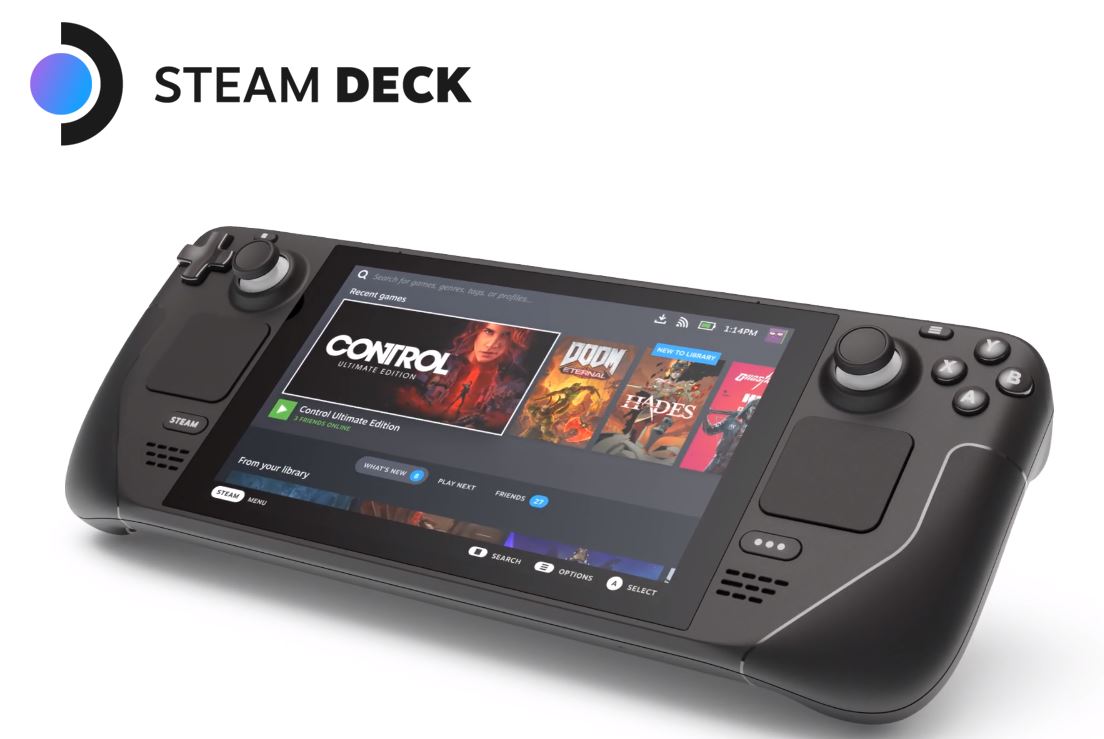 After the recent reveal of the slightly improved Nintendo Switch OLED Model, Valve shocked the gaming world with their own rendition of a portable steam library by announcing the Steam Deck, a portable gaming device with a 7-inch touch screen. Let’s break down what we know so far and try to wrap our heads around what this means for the gaming landscape.

As I began to write this, I left the Steam App open on my PC and just watched as the product video played on loop. This is a gorgeous device, and I can’t wait to get my hands on one. It comes in a matte black finish at around 11.73 inches across and a beautiful seven-inch LCD screen with a 60Hz refresh rate. On the front of the device, a few things definitely stand out from most traditional portable devices. There are two thumbsticks, a D-pad as standard controller fare, with four buttons (similar to a PS5 or Xbox controller, but what stands out on the device are the trackpads that can be used in lieu of a mouse. The Thumbsticks include the touch sensors that are similar to the PS5, that allow for light or more forceful pressing of buttons to elicit different types of controls while playing.

On the top of the device, there are two shoulder buttons on each side (left and right), volume buttons, two microphones, a headphone jack, a large fan, a USB-C port, and a power button. It’s odd, really, to see the inclusion of an older headphone jack, but this matches. Valve’s commitment to making this device feel like a PC. They have included built-in Wi-Fi and Bluetooth, which will allow us to sync our newer headphones as well. On the back of the device, there are two more shoulder buttons each (left and right, respectively), and I feel like they are trying to give developers as many options as they can.  Physically, this looks like a solid addition to a gaming library and is great for when you don’t want to bring the laptop to the family room but still want to play some PC games. 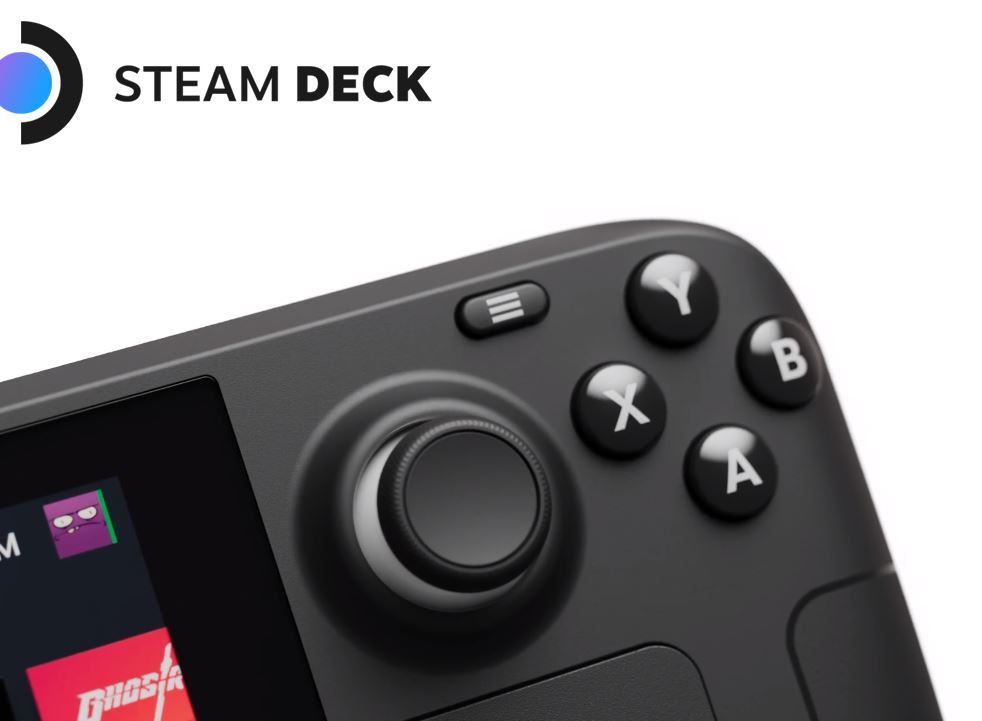 A look at one of the thumbsticks and input buttons on the new Steam Deck by Valve.

Internally the CPU is an AMD Zen 2, with 2.4-3.5GHz of processing power, which I appreciate the transparency, as Nintendo refuses to announce the amount of RAM and what CPU they have included into the Switch (which is the same CPU and RAM in the OLED and Original model respectively). The Steam Deck includes 16GB of RAM and has three storage models. There are no CPU or GPU differences in the models, with the size of Storage coming in at 64GB, 256GB, and 512GB. The two physical differences are the two higher models have a faster SSD storage, and the 512GB model comes with anti-glare etched glass. There are MicroSD slots for additional storage, which greatly trump what the Switch offers. I know we keep going back to comparisons with Nintendo’s device, but it is the only device around that offers any type of comparison. The battery will allow play of two to eight hours, although we have not gotten to test that in the wild as of yet, but the differentiations tend to lead us to believe that it’s based on how graphically intensive the game you are playing is.

There is a certain inviting feel to the device, and it has forced me to put down my initial deposit. Currently, you may put in a small deposit of $5 for any of the sizes, and you will receive an email with purchasing instructions. I was excited not to have to deal with GameStop, and hopefully, Valve makes this a seamless process. For a device that plays in 720p

After breaking down the console’s physical components, let’s take a look at the software side of things. Valve created SteamOS, a Linux-based platform that is compatible with both Mac and Windows offerings. What is amazing about this device is that your entire steam library is accessible, and you can play any game. They even built in a Fast Suspend/Resume feather that allows your system to go into sleep mode, and you can resume your play as soon as you pick up the device. With the accompanying dock, you can plug your device directly into a monitor and play games from the Steam Deck, which according to Valve, is to operate and function as a PC. With their commitment to this acting like a PC, you can install productivity software and even other game stores, like Epic, to maximize its potential.

The home screen for SteamOS greatly resembles the layout from my Apple TV, which isn’t a bad thing at all, but it does streamline the games more, which is more welcome on the smaller screen. All the features found in the Steam App (Chat, Remote Play, Notifications, Cloud Saves, and the Store) are all available here and operate just as they would on your PC. The fact that this includes your entire Steam Library is mind-boggling. I purchased a Nintendo Switch to play some of my favorite games while lying down, but to have my entire Steam Library instantly accessible, I still can’t believe this is a reality. I am sitting here writing, thinking about playing Disgaea as I used to on my PSP; I can’t believe how excited I am with this announcement.

Here is a demo of Baldur’s Gate, running on the Steam Deck. Baldur’s Gate is a recent release and shows the graphical prowess of the device.

Digging in a little deeper, Valve made a new technology called Proton, which allows games to work without porting whatsoever. Rather than force every developer to rework games to fit, they made the console support the titles, which is a vastly superior idea, and eliminates the need for securing contracts and licenses, and allows games to be instantly ready to play. We have yet to test a model, obviously, and there are some tweaks we can perform to enhance battery life (dropping FPS, for instance), but to be able to have your entire Steam Library in your hand and have a fully playable experience (microphones and speakers for multiplayer) is something I would not have considered before this was announced.

According to Valve, most games will have a preset graphical setting to maximize performance, which if all developers have to do is offer some adjusted settings, that is a great compromise from having to rewrite the code from the beginning. Additionally, multiplayer can be split-screen with either a separate controller or a phone and the Steam Remote Play app. After reading several interviews with the developers, they hinted that future iterations would be available, and they don’t mind other companies developing their own Steam Deck because, in the grand scheme of things, the more games we purchase, the more their coffers grow.

I am still shaking my head at the possibilities behind this device and liken this to when I first heard about the Nintendo Switch and getting Skyrim on a portable device. When I purchased it, it didn’t have the same feel for me, and I went back to playing Skyrim on my PC. But there are so many games far outpacing what Nintendo offers that I can play on the Steam Deck. I look forward to trying to procure a playtest and will offer more insight as it comes available. Currently, we are still pending word on the dock, including pricing and features. Until then, I patiently am waiting for my chance to purchase my Steam Deck!