Dragon’s Dogma is an anime series based on a Capcom game of the same name. The story follows Ethan on a quest for revenge as he sets out to kill the Dragon, who stole his heart. Not in a romantic sense, the Dragon stole his heart. I will be honest; I was skeptical about this adaptation because the game’s story wasn’t that good, to begin with. It started pretty interestingly, but for the majority of my playthrough, it was just filled with random fetch quests. Also, most of the characters were frustrating, especially the pawn you had. I mainly played the game for its enjoyable combat.

Before this, Netflix released the adaptation of Castlevania games, and that was awesome. Mainly because they respected, the lore created by many entries in the franchise. You see, Castlevania has at least 40 games worth of lore, but Dragon’s Dogma has only one main entrance, and that too had a weak story. So there was a reason for me to be a bit cautious about it.

The story starts exactly like the game, but your family also gets killed, relaxing, not a major spoiler. After that, it’s a series of independent episodes. Ethan fights different monsters in each of the attacks until he finally reaches the Dragon’s layer. Now how shall I put it, it’s average? I didn’t like most of the episodes, and frankly, they didn’t make sense. There are seven episodes in total, and each of them is named after one of the seven deadly sins. And it is the most-by-the-book narrative I’ve seen. It is not dull, but it is something I have already seen a million times before. At some points, it felt like they forced the narrative to fit around the concept of the 7 deadly sins; it just didn’t feel well integrated. But it’s not all bad; I liked the “Greed” episode and the “Pride” one.

You can skip all episodes and watch the 1st and last ones. Of course, there is the so-called character development in the middle, but I will talk about that in the character portion. One thing which I found weird was in the second episode. It starts normally but during the climax where we get to see the outcome of Ethan’s actions. It awkwardly cuts to a scene where Ethan is standing at a distance, and then the repercussions of his stories are shown through a slide show. Also, what is delivered to us doesn’t make any sense. Everything that happens feels very ham-fisted. There is no buildup or any clear indication of how things might end up. It just comes out of nowhere and tries to fit into the narrative of the seven sins. 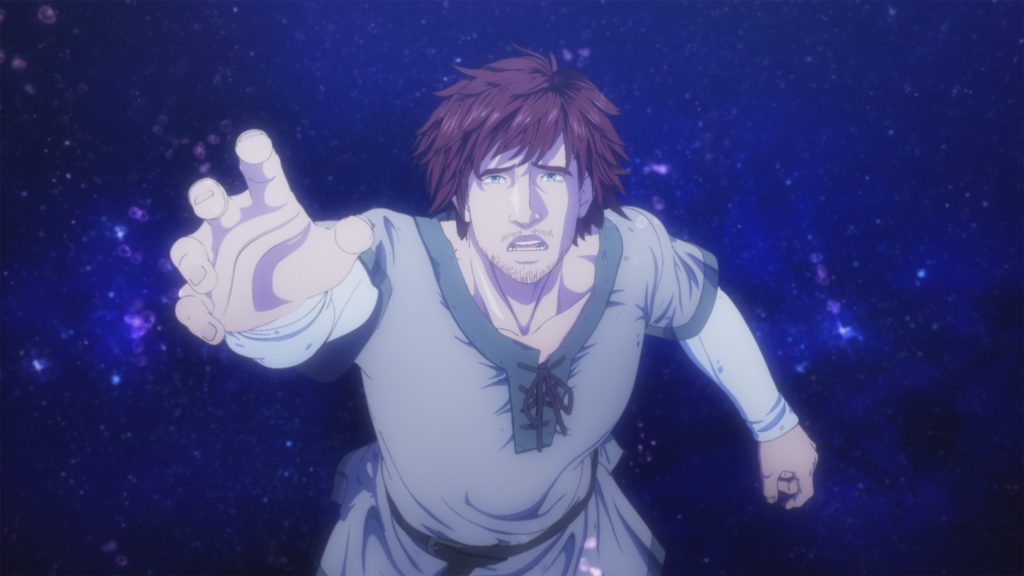 So yeah, not a big fan of the story.

Like most Netflix anime these days, the animation is a blend of 2D and 3D animation. All the characters are animated in 3D, and all the environment is in 2D, except the one going to be destroyed. This creates a weird dissonance between the world and the characters; they feel like they don’t belong there. By the time you get used to it, the show ends. But credit where it is due, the models of the main lead is fine and well animated. There is also no weird FPS drop, so the movement looks smooth. Some of the fight scenes were very well made, especially the Hydra one. However, it’s not that flashy or half as good as 2D animation.

So overall, the animation feels off in the beginning, but you get used to it. The designs of the characters are delicate, and the movement doesn’t feel like it is stuttering.

So the two main characters are Ethan and Aanna, there is also Ethan’s family, but they are pretty forgetful. Most of the characters are. Ethan has a back story that doesn’t add much to the ongoing plot. Because you will never understand why Ethan is doing what he is doing, supposedly, he is being corrupted by revenge, but it’s just all over the place. The show tries to show his gradual descent into madness, but it is not consistent at all. The motivation behind his actions doesn’t feel right. He also doesn’t act like a guy who has just lost his whole family, and he seemed to get over it rather quickly; it takes me longer than that to move on from my crush’s rejection.

The second main character is Anna, and she is….fine. Probably the most fun part of the story. Her character development from an emotional, less pawn to a caring human is far more convincing and realistic. She was honestly more of a protagonist for me.

And let’s not talk about the side characters. They are more one-dimensional than a dot on a paper. Overall, I was very disappointed by the show. The story the writers were going for certainly doesn’t fit well with the 7 Episode structure. This is by no means a bad anime, but an average one. Your opinion might differ from mine, so feel free to watch it, but as for me, I don’t recommend watching this anime unless you are bored.