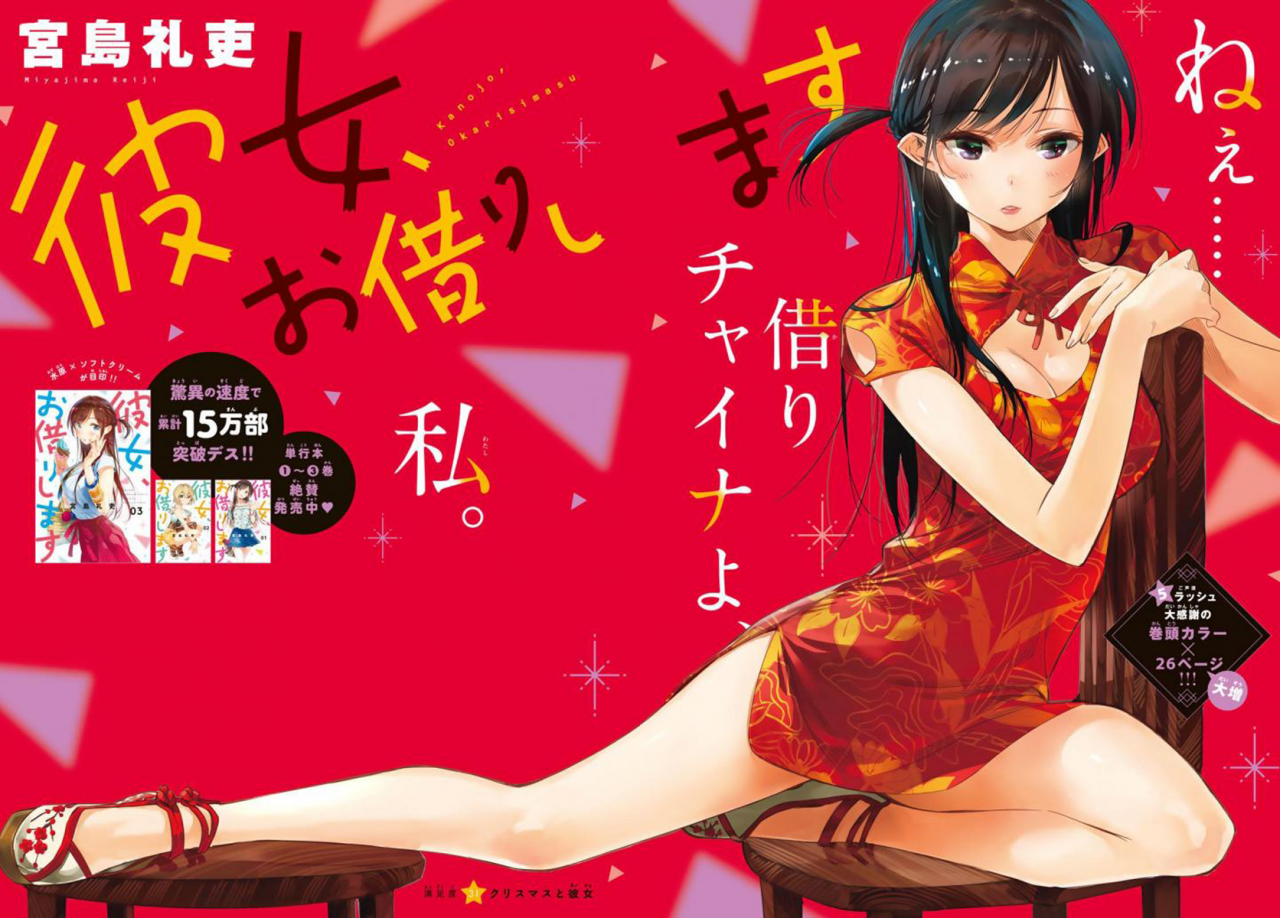 Announced on December 15, 2019, A new love comedy series is animated by TMS Entertainment with Kazuomi Koga and Mitsutaka Hirota, Kanojo Okarishimasu, aka “Rental Girlfriend.” The anime is set to premiere in July 2020 in the Animeism programming block on MBS and some other networks.

The anime is created by the creator of Nisekoi, another popular love comedy series. Kanojo Okarishimasu is known to be one of the most popular manga in Weekly Shounen Magazine. If you are interested in the love to come manga series like Nisekoi, give it a try!!

Kanojo Okarishimasu, aka Rental Girlfriend, is a Japanese manga series both written and illustrated by Reiji Miyajima, the same creator of famous love come Nisekoi. The manga had begun serializing in Kodansha’s Weekly Shounen Magzine since July 2017 and later compiled into 14 volumes in March 2020. The series has been licensed by Kodansha Comics in North America, and now they are going to release their first volume on June 2, 2020. The television anime adaptation is going to premiere in July 2020

Broken up with his girlfriend Mami Nanami after dating for two months, Kazuya Kinoshita is now interested in an online app to rent girlfriend to get over the break-up. He met a girl Name Chizuru Mizuhara, an attractive girl who is too perfect for a girlfriend. But Kazuya always gave her a low rating.

Between one of the same dates, Kazuya’s grandmother has collapsed in the Hosptial, and they went to see his grandmother, who seems to be doing fine, but grandmother noticed Chizuru Mizuhara and He lied about her being his girlfriend.

The grandmother is now completely fawned over Chizuru. And now to keep up appearances with his family and friends thing became more complex as the renting continues. 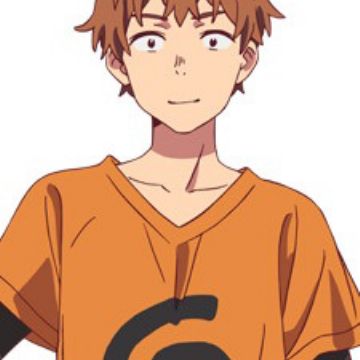 The leading male protagonist of the Kanojo, Okarishimasu (Rental Girlfriend) series. A college student at Nerima University and majoring in Business Administration. He lives by himself in an apartment at 203 Royal Hills Nerima.

He looks rather dull and lacks anything that makes him stand out. His hair color is brown and not too long but it appears messy and spiky.

He is quite weak against pressures and responsibilities and tends to lie around without superiority. Those lies often get himself in trouble. He sometimes well aware of himself that he is involving himself in a lot of troubles but all was the cost to protect other lies and trouble just so he can make the make people important to him happy. 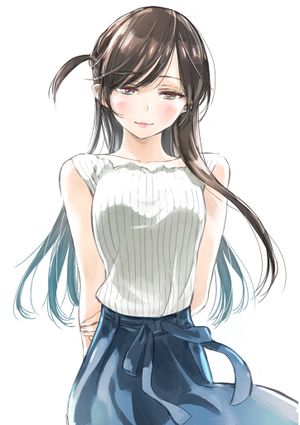 Chizuru Ichinose is also known as Chizuru Mizuhara in her “Rental Girlfriend” job. She is the leading main female character of the “Kanojo Okarishimasu”. She too is a College student at the same university as Kazyuya, Nerima University. She is majoring in Literature. She lives in Room of Royal Hills Nerima by himself. Yes, she is also a neighbor of Kazyua Kinoshita.

Chizuru appears as two faces to hide her identity as a “Rental Girlfriend”. She appears as a diligent student, double hair braided, a glass, a butterfly accessory, and not wear many flashy clothes either.
On the other hand at her job, She appears as a real beauty that stumbles everyone. Long chestnut hair, makeup, light clothing, notable accessories, and her hair tied.

Chizuru takes real care for her customers and acts as almost as a real girlfriend and sometimes acts considerately towards his customers. However, all this was an act for her customers and her job. On the other side, she acts as a real snitch, she is calculative and sharp. But that doesn’t change the fact that she indeed has a kinder side when she sees people in need. 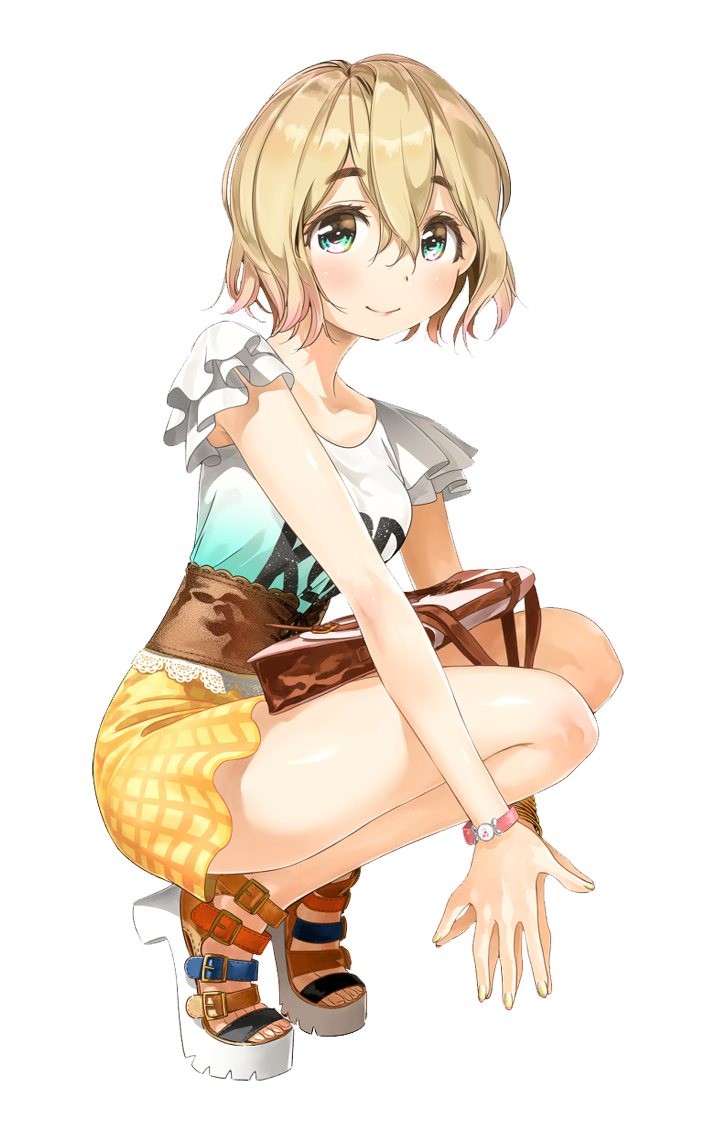 Mami Nanami is one of the characters of the series. She is the initial starter of the story and Kazuya Kinoshita’s Ex. Even though she is not the

She has bright blue eyes and blonde hair with little pink highlights on the ends. She mostly appears wearing light clothing and a purse on her hand.

Mami Nanami sometimes tends to be kind, caring, and supporting and offers helps others in need. She is quite approachable but this girl has a dark side. She is sharp and sometimes quite doting toward Kazuya. Her staggering intimidating look is quite scary sometimes.

Her actions sometimes open Kazuya’s eyes which makes the story back on the route again. 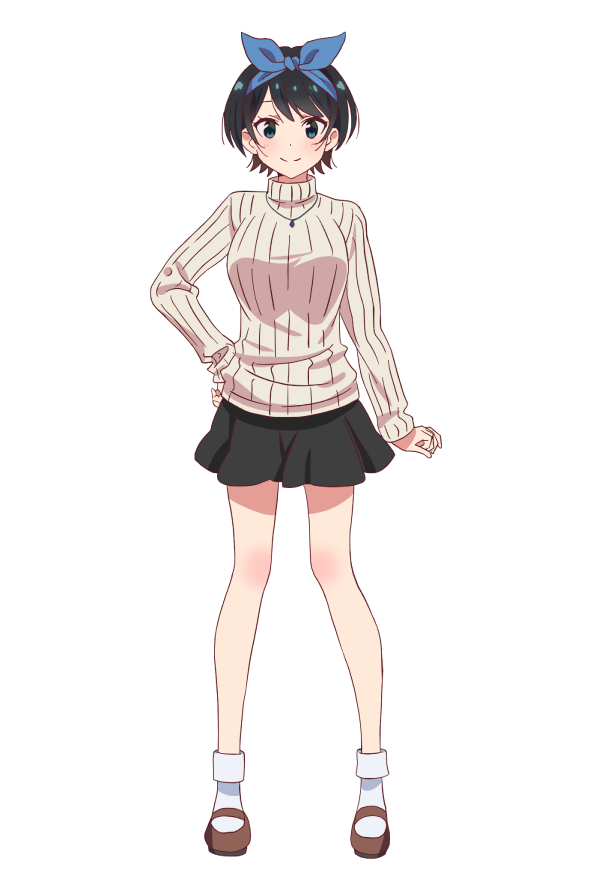 One of the characters from the Kanojo, Okarishimasu series. She is the 3rd character who appears in Kazyua’s troubled life. She has a condition of something like Bradycardia, where a person’s heart beats slower than the average person. She sees Kazuya as her love interest.

She is a childish teen with short hair with a ribbon headband. She usually had her school uniform on during his “Rental Job”.

She is a real pushy and possessive person and will do whatever she can to be Kazuya’s girlfriend. She is quite fixated on the idea that getting a boyfriend will help her cure her condition which was the whole reason she joined in the Rental Girlfriend service. 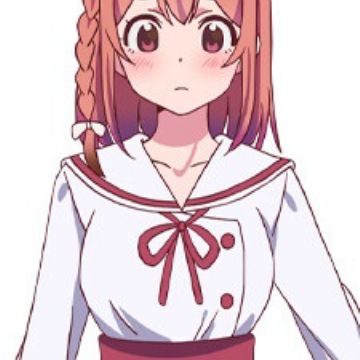 One of the characters forms Konajo, Okarashimasu, and the 4th character who appeared after being introduced by Chizuru Ichinose to help her with her shyness.

Just looking at her one can get a soft and gentle appearance aura from her. She has pink hair with one side braided. Her apparel depends on the type of date she chooses.

Sumi is a character who is extremely shy with others. She was introduced by Mizusawa as she was new to the Rental Girlfriend Service. After going on dates for consecutive times she develops some feeling towards Kazuya Kinoshita.