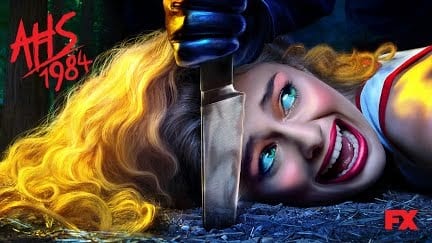 Tonight’s episode of American Horror Story is titled “True Killers” and it will deal with Mr. jingles. Jingle’s is closing on the one who got away as the counselors rally to escape Camp Redwood. Here are a few details about tonight’s episode:

I bet that this episode like it’s preceding episode will be just too much to handle. Till episode 4, things were just spooky, but now they are too intense to handle. By Episode 3, the events at Camp Redwood have gone from spooky to straight-up mind-bending, meanwhile, the show’s fandom won’t stop debating about what more is to come in future episodes.

There’s a bit of a surprise for those amongst you who cannot get bored with Murphy’s signature twists and turns. The promo for AHS: 1984 Episode 4, teases bombshells. Here’s the short promo for tonight’s episode:

You can watch Season 9 on Amazon Prime, by clicking on the following link:

For now, only first three episodes are available, the one that is to come today will be available after it has aired on Fx. You can purchase each episode at $2.99. AHS Season 10 was renewed by FX, back in 2018. While some fans think that this could mean that the network has faith in the show as Murphy’s cult-classic, other fans think that it’s time for the network to kiss the show goodbye and this early renewal was their way of saying goodbye to the show.

Do you want AHS to go on, let us know in the comments section down below.

Jay Patel - February 18, 2020 0
League of Legends is supposed to come out for mobile devices soon as per the reports, and all the fans are already excited for...