‘Sports’! We all have been a part of one sport or another at some point in our life. Whether it’s just for fun or an opportunity as a career, sports/games have been an integral fraction of our lifestyle as they not only help us to be fit but also provide us with multiple moral values like compassion, teamwork, sportsmanship, etc. that we might not be able to grasp otherwise.

However, just like most activities in this world, the deeper you dive into a specific game, the more concentrated your life would become with regards to that game. The anime we will talk about today gives us an idea of the concentration that a sportsperson envelopes himself once he reaches new heights. However, this is just a partial explanation of what Ping Pong The Animation has to offer, so let’s dive a bit deeper. But we are well-mannered weebs, so before diving into the review, let’s take a quick look at the synopsis.

Makoto “Smile” Tsukimoto (who rarely smiles) and Yukata “Peco” Hoshino are childhood friends, capable and aspiring for table tennis, and are a part of Katase High School. Coach Jō “Butterfly” Koizumi has high expectations from both of these brilliant individuals. However, when Peco is humiliated and defeated by a Chinese student, he loses himself and stops practicing. On the other hand, Koizumi sensei discovers Smile’s potential and tries his best to motivate him to overcome his psychological obstacle.

Sports anime usually focus on expressing the life of a sports person focusing on that particular sport. Shows like Slam Dunk, Haikyu, and Captain Tsubasa explore the lifestyle that a person attains once he adapts to their respective game. However, when I say the word “SPORT,” Ping Pong or Table Tennis isn’t the first game that would summon up in your mind since it’s an indoor sport, which makes it look quite forgettable or inferior to other sports like Football or Cricket. Nevertheless, Ping Pong, The Animation explores the intricacies in this supposedly inferior sport and amazingly presents them.

Table Tennis from the outside may not seem like a game you need to be meticulous about, but it’s a whole different story from the inside. Just like any other sport, table tennis is not only about the fight between two athletic bodies aiming to attain the maximum score. Rather, it’s also about this game’s psychological depths and the mind-blowing thought process that follows it. Defeating an opponent is easy to say but a million times harder to do. Thinking of a way out of the predicament that can lead to the success or failure of you as an individual and an athlete is not only complicated but also brutally tedious, and the story offered by Ping Pong The Animation gives us a vivid idea about the same. 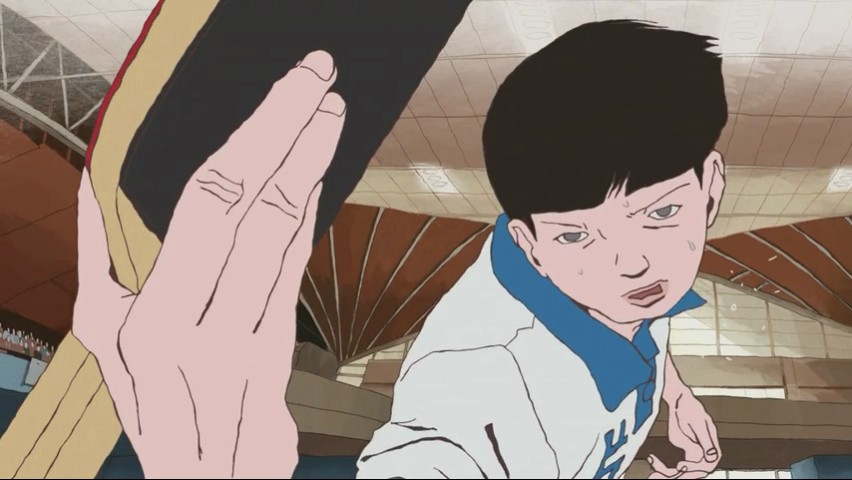 If you have ever heard about this series, it is most likely backed by a compliment that expresses this anime’s greatness or why you should watch it. For those of you who didn’t understand that reason and want to know exactly why Ping Pong gets so much love, let me tell you that it’s all about execution in this show. The meticulous presentation of those psychological disputes that go on as a table tennis player strikes one single hit on the ball is what makes this show so great!

As explained earlier, people tend to overlook Ping Pong as a sport and ignore the amount of focus and hard work required to shine in this game. However, this series’s presentation would make you believe that Table Tennis is nothing less than any other sport. It may not look like it, but each strike has hundreds of calculations and assumptions backing them. Blended with the drama offered by the actual story of this anime and we get an engaging series that would change the way you look at any sport.

The set we have here is shallow, with only a few of them in the actual limelight; however, that doesn’t degrade the factor of enjoyment from the show as all of these characters have a great backstory, which serves as the reason for us to invest ourselves in their personality. Every character has its perspective on Ping Pong, and that perspective makes them interesting and develops their character throughout. The “Why?” for every player in the story is compelling and heart touching and sensible.

All of the personalities are so distinct, with their interdependence being delicately put forward. The share of screen time they get is quite balanced, allowing us to understand all of them with ease. The main character, Smile, maybe the protagonist, but other side characters like Dragon, Peco, and China, make this show a lot more qualitative in terms of great personalities to look forward to. Not to mention Koizumi Sensei and Obaba were quite vibrant even from the side.

1. The animation was horrible, and I don’t think you can disagree with that. The way all of these characters were drawn looked ugly and quite difficult to distinguish initially. Not to mention, the background, body structures, and overall animation, in general, were really sloppy to look at. It felt like they hired 5 artists, gave them 9 months, and asked them to animate the entire series.

2. The matches didn’t play out smoothly for the most part. There was only one match where the players were shown playing ping pong for a decent amount of time, which was the final match in the last episode. The matches had a few character movements, but stop images usually succeeded them, and the soundtracks expressed the essence of the characters. If there was more flow in the matches themselves, they could have been a lot more engaging.