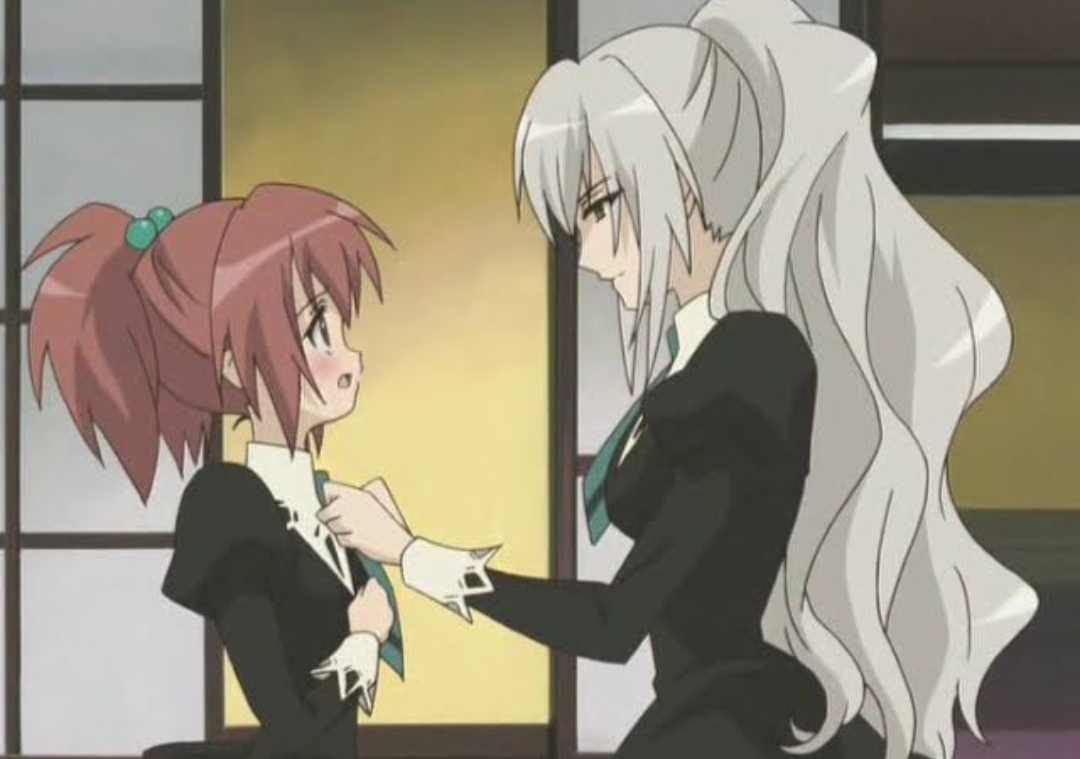 Since you are already on this page, I’ll assume you know that Yuri is a anime genre that focuses on the relationships between two girls. However, it is not just the intimate elements that makes the Yuri anime different from the others. Rather, it covers the evolution of a relationship, which is definitely not restricted to take place between opposite genders.

There are so many Yuri anime out there that people often get confused which one to watch first and that’s when they start looking for recommendations. So here is my list of popular Yuri anime, that you need to watch right now! 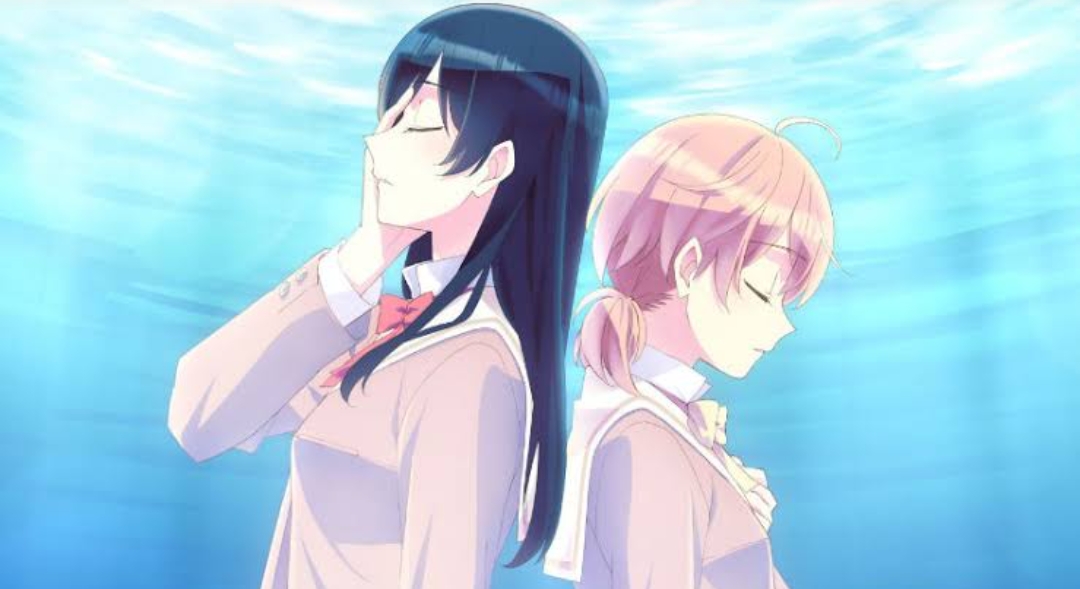 Adapted from a Japanese manga written by Nio Nakatani, the anime, ‘Bloom Into You‘ depicts the story of a sweet girl who looks forward to experience her love life, and has been waiting since ages for the day when she will be asked by someone to be his girlfriend. When her junior high school classmate confesses to her, she failed to feel any romantic connection with him and turns him down. Instead fell for the president of the student council, Touka Nanami, when she enters her high school.

Every Yuri lover has watched this anime at least once and even if you are not into this genre, the diligent love story between Yuu and Touka will surely make your heart full of joy and contentment. 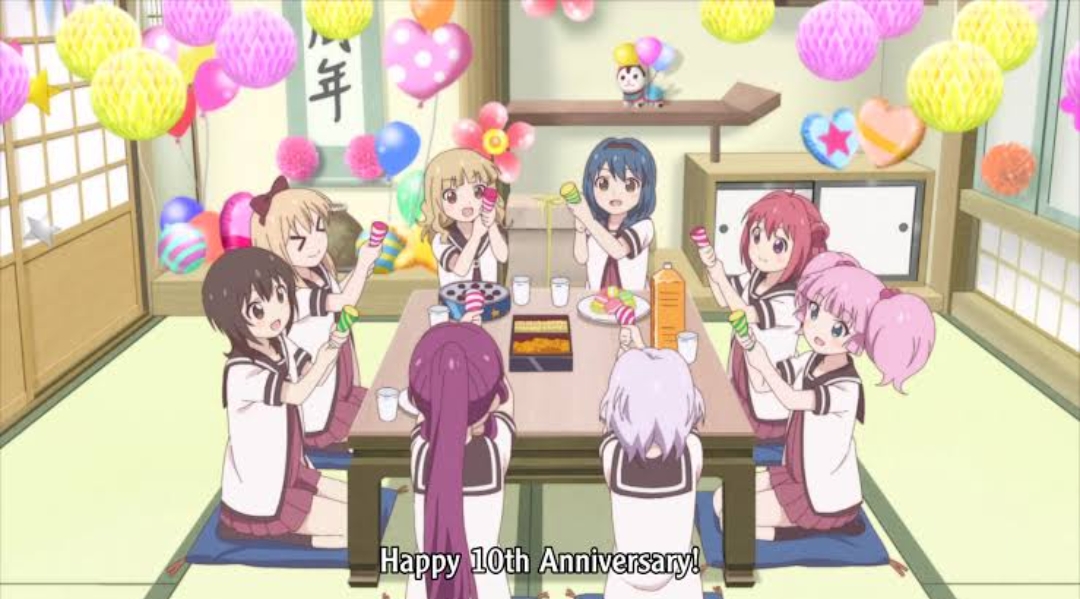 Inspired by a Japanese manga series, penned down by Namori, the story has been set in a fictional schhol in Takaoka, Toyama, centering around the lives of an all-girls group named, ‘Amusement Club’ comprising of Akari Akaza and her friends— Yui Funami, Kyōko Toshinō and Chinatsu Yoshikawa, who amuse each other. Among the four of them, Akari Akaza is the youngest one and has entered the middle school later than the others, after spending an year of a loner in the elementary school.

The anime can be classified better as a lolita, rather than a Yuri, since it hardly has any actual yuri scenes (although a few kids scenes are still present in the anime). Most of the time the characters are seen drooling over their crushes. This light-hearted, humourous anime, Yuru Yuri, is a quite a good package consisting of romance, comedy, and cute little girls. 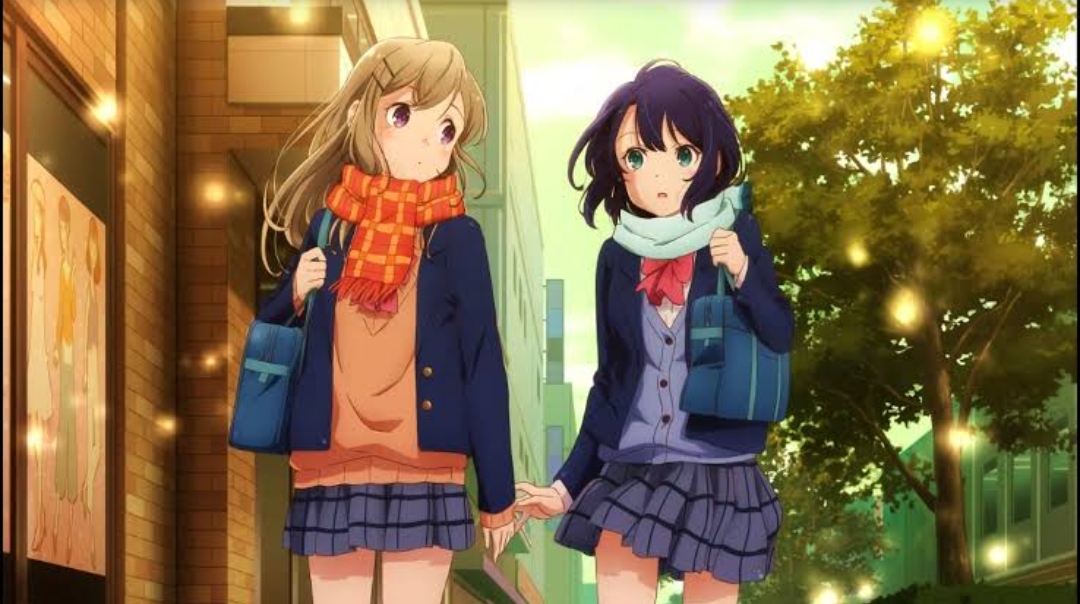 Originally inspired by a Japanese series of yuri light novels, penned down and illustrated by Hitoma Iruma and Non respectively, the anime, ‘Adachi and Shimamura’ is one of the sweetest yuri anime, and although the plotline doesn’t have anything which might make it unique, everything else about it is top-notch and lovable. The main protagonists, Adachi and Shimamura make up a cute and adorable pair, who fell for each other after being friends for a while, and spending some time together in the gym almost alone, playing ping pong.

The coming-of-age story of the anime is a little similar to ‘Bloom Into You’ focusing on the growing friendship between the two leads, and how they get to know each other in a better way throughout the series. 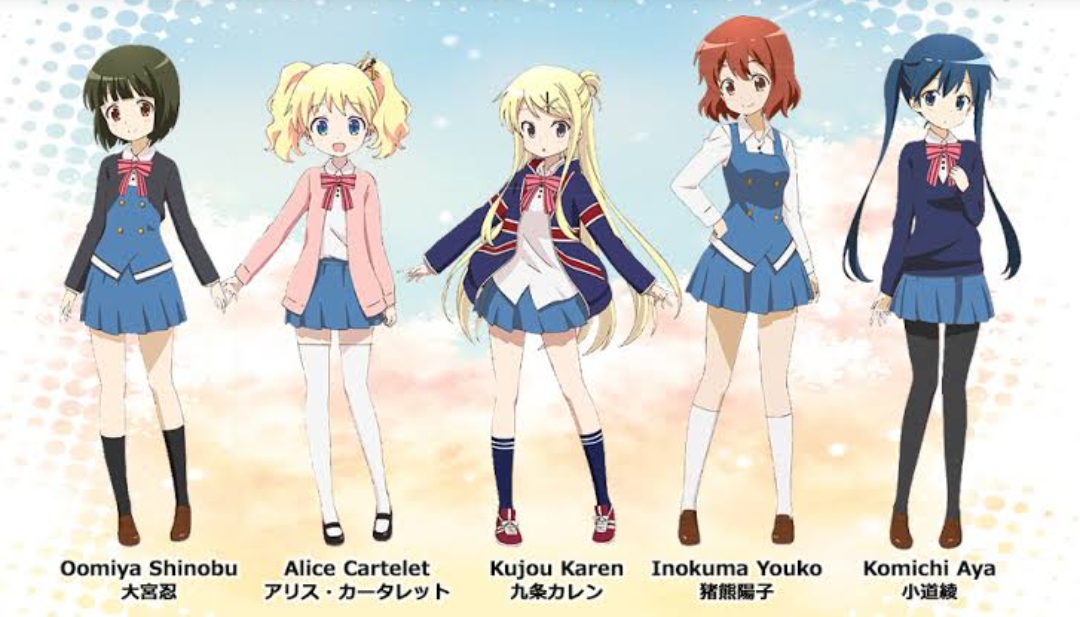 Kin-iro Mosaic has been adapted from a 4-panel manga of the same name, written by Yui Hara, depicting the story of abJapanese high schooler, who used to own a homestay in England, five years before, with a cute girl known as Alice Cartelet. Although her stay in England was short, their bond with each other strengthened quickly and they became the best of friends. When Shinobu receives a letter from Alice, stating not only that she would be enrolling herself in the same high school as her, but also residing in her neighbourhood, Shinobu gets full of excitement. Alice has a nice time with Shinobu and her friends from the school, Yoko Inokuma and Aya Komichi, before Karen Kujo, Alice’s friend from England follows her to Japan.

It is also a slice of life anime, however, the main highlight is given more on the Yuri aspects. The series is full of humour, with good animation and exciting characters. A new anime film based on the same manga will be premiering this year. 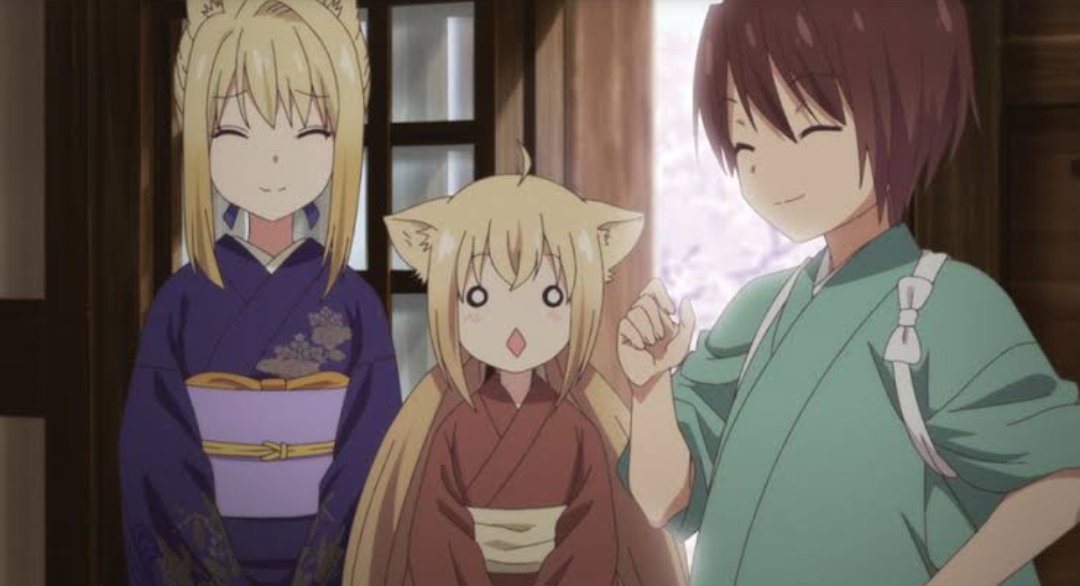 Like most of the anime, ‘Konohana Kitan‘ is too a Japanese manga series-inspired anime, originally written by Sakuya Amano. The anime revolves around a cheerful girl named Yuzu, who works at a hot springs hotel at Konohanatei in a beautiful village. She rarely knows anything about the place, but when she comes across a girl who works there as well, Kiri, not only does she gets a good company, but also the required help from Kiri. Gradually, both of them establish a beautiful bond with each other, as well as family at Konohanatei.

The series combines the genres like Yuri, slice of life, fantasy, and drama— delivering an overall entertaining and enjoyable anime. 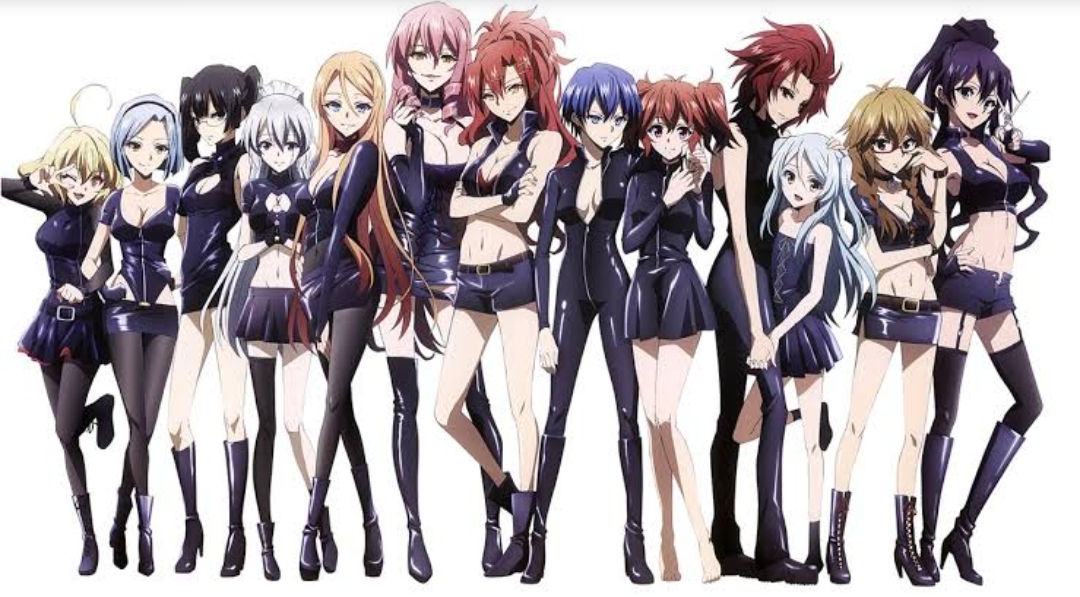 Adapted from a manga written by Yun Kōga with Sunao Minakata as the illustrator, the anime ‘Riddle Story of Devil’ is one of those Yuri anime whose existence is like a blessing for all the Yuri lovers. Focusing primarily on thirteen girls who just transferred to a girls’ boarding school, known as Myōjō Academy. However, twelve out of these thirteen students, are assassins coming from different backgrounds, assigned to kill the thirteenth girl, Haru Ichinose. If they become successful in their mission, they can ask for any wish to be granted, but their failure would result in being expelled from the class. However, one of the twelve assassins, Tokaku Azuma, falls for her instead, and vows to protect Haru from the evil eyes of the rest of them, as skilled as her.

Read: Top 10 Anime Similar To ‘Jujutsu Kaisen’ That You’ll Like

The transformation from a cruel assassin to a heartwarming lover, Tokaku’s character is basically the highlight of the entire series. ‘Riddle Story of Devil’ is an action-packed thriller Yuri series, focusing on the romantic relationship between the two girls. It is a must watch anime for all the Yuri lovers, since they will be treated to hardcore Yuri scenes. 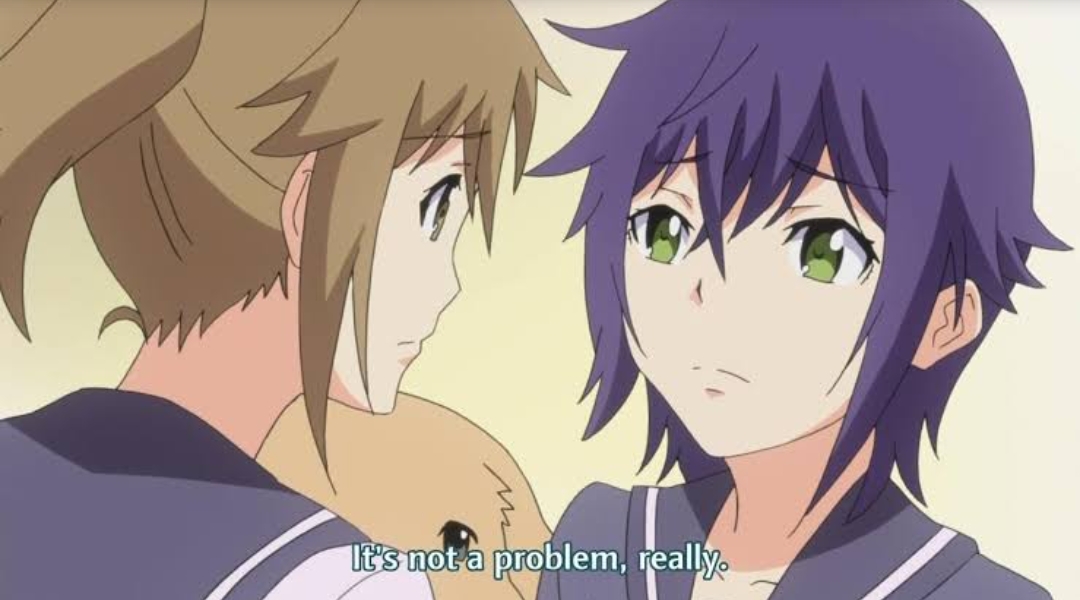 Adapted from a yuri manga series written by Kuzushiro, ‘Inugami-san to Nekoyama-san’ has been classified under the comedy Yuri genre, presenting the story of two high school girls, named Nekoyama and Inugami, with poles-apart personalities, living in the same neighborhood. Yachiyo Inugami is a girl who likes cats, although her personality is like that of a dog, while Suzu Nekoyama is like a cat—shy, but loves dogs. However, when they come across each other, the poles get attracted to each other and a new feeling pops up between them.

The story revolves around a girl named Nagisa Aoi, gets enrolled into St. Miator’s girls’ Academy after a transfer, where she meets the most gorgeous and popular girl in the academy, known as Hanazono Shizuma. However, even though Shizuma is the star girl, Nagisa unexpectedly gains her attention and a romantic relationship grows between the two eventually.

The series focuses on more than one main couple, and all of them are under the LGBT tag. ‘Strawberry Panic!’ is one among the first yuri anime to have come out, and thus, does not feature a lot of Yuri scenes, however, the concepts of school politics, love, betrayal, and heartbreaks have been portrayed well making it a lot entertaining to watch than the recent Yuri anime.