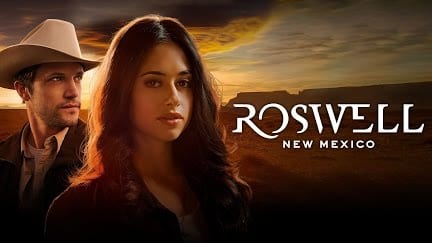 Roswell New Mexico is an American drama/sci-fi series that deals with the life of Liz Ortecho, the daughter of undocumented immigrants who upon returning to her New Mexico hometown, discovers a bunch of hidden truths.

The most shocking of all is the truth about her teenage crush who is now a police officer. Roswell, New Mexico is created by Carina Adly Mackenzie for The CW Network. The show isn’t first of its kind as it is the second television adaptation of the Roswell High, a book series by Melinda Metz.

Roswell, New Mexico first aired on January 15, 2019, and is currently in its Season 1 run. The latest episode to come out is titled “Champagne Supernova,” which will come out on April 9, 2019. It is directed and written by Edward OrnelasAdam Lash & Cori Uchida, respectively.

According to the official description of 1×11, the town is preparing for the UFO Emporium Re-opening Gala. It is here that Liz (Jeanine Mason) and her team find themselves on a collision course with an arch enemy. After this episode, the show will air finale episode on April 16, 2019, which will be titled as ” Creep.” Here, check out the trailer below:

Roswell, New Mexico has been averaged received so far. The show holds a 53% based on 19 reviews, with an average rating of 6.22/10 on Rotten Tomatoes. Chances for a second season seem bleak as of now. More as we have it.