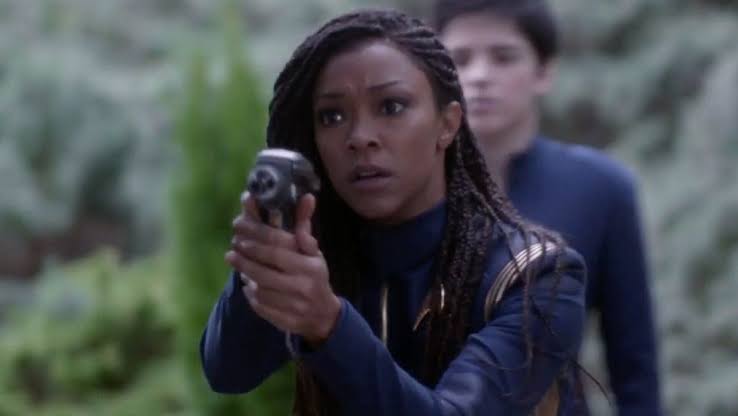 Update: Star Trek Discovery Season 3 was the beginning of the franchise’s panel at New York Comic Con 2019. There were a lot of showrunners present on the stage which includes Michelle Paradise, and executive producers Heather Kadin and Alex Kurtzman appearing on-stage. They were alongside a number of members from its cast and the panel delivered a new trailer for the third season, as well as some fresh info on what fans can expect. We have anon Star Trek Discovery Season 3 teaser trailer, and the delay.

In the trailer we see Michael in the future, there are a lot of changes in her looks which show how much time as passed. In the trailer, we also see Book, Saru, and Tilly also appear, and the crew of the Discovery is marked as being “930 years from home” where “their fight begins”. Book says, “Do you believe in ghosts? That patch on your shirt which he was referring to the Starfleet patch.” There’s a look at some action sequences, along with a question being asked: “Where will you go?” The answer, it seems, is “Wherever the answers are.”

There were also cast members present like Sonequa Martin-Green, who plays Michael Burnham, Saru actor Doug Jones, Mary Wiseman, who plays Tilly, and Anthony Rapp, who portrays Stamets, Wilson Cruz, who plays Culber, and David Ajala, who plays a new character, Cleveland Booker. After the trailer, Martin-Green said “Everything is handled with such courage and respect and gentleness. What’s interesting now is that in the very title of our show, it’s all about discovery. You get to be on that journey with us.”

Star Trek Discovery Season 3 will be released in Mid-2020 on CBS All Access in the US. Thus far, the show has been available to watch on Netflix in other territories.

Tweet from Alex Kurtzman, the showrunner, has confirmed that Star Trek Discovery season 3 is on its way to hit the small screens. Thus, the fans are already excited for the next season. Check out the Tweet below!

#Starfleet embarks on a new mission soon – #StarTrekDiscovery Season 3 is on its way. pic.twitter.com/7icyLaOcgo

However, the Tweet does not confirm any but we will get asoon, as we are expecting the next season to come out in May or June of 2020.

On February 27, 2019, Star Trek Discovery was renewed for a third season and as of now, during writing this post, Star Trek is in post-production. It is expected to release in 2020 but it might get delayed due to Coronavirus.

As of now, there is noon the exactbut we know for sure that it will be coming somewhere around Mid-2020 on CBS All Access. It might still get delayed by sometime, but we are expecting it to release in 2020.

Moreover, Michelle Paradise added by saying “It’s super exciting, we are married to canon. We honor and respect all of that. We are looking for ways to push the show and push our characters.” He further said “We know to go 930 years into the future, the audience has high expectations for what that might look like, what that might feel like. Every episode feeling like a mini-movie.”

If you are a newcomer, don’t worry because the new season is also welcoming to newcomers. Heather Kadin “You didn’t have to know canon to go into the show. You can just come in and you don’t need to know what came before. You as the audience will experience the newness as the cast experiences it for the first time.” In short, fans are going to have the time of their life with season 3.