Following an embarrassing and honestly, quite a pathetic death (it’s really funny), shut-in teenager Sato Kazuma finds himself in front of a beautiful yet annoying goddess called Aqua. When given the choice of whether to move on to heaven or get reincarnated in a real fantasy world, Kazuma being the man of culture that he is, of course, went for reincarnation. On top of this, he is given an additional wish to pick anything to aid him in his adventure, here Kazuma makes an absolute big-brain move and picks the goddess herself, which we later come to find out wasn’t as smart a decision as it looked at first.

Just between you and me, Aqua is useless. I mean she’s so useless that she can give Sakura from ‘Naruto’ a run for her money.

All things considered, Kazuma was excited at the prospect of being an adventurer. But this excitement was short-lived, as his expectations are not met with the reality he is served. They were supposed to go on a grand adventure, instead, they are struggling to get by the living expense and the necessities. However, this is just the beginning of their misfortunes. To add to their troubles, they recruit an explosion-obsessed magician named Megumin and a masochistic crusader named Darkness to their party. And of course, they try to complete the ultimate objective of every fantasy game, which is to defeat the Devil King. But with a party as dysfunctional as this, one can only try so many times before giving up. So Kazuma gives up on it and decides to laze around instead.

KonoSuba is a comedy, and it is very good at it. It serves as a parody of the isekai genre, continuously making fun of all the clichés and tropes of the genre. It is funny seeing how the isekai genre has taken over the anime industry in recent times. Despite all this, the major portion of the humor comes from the chemistry of the main cast. I loved the dynamics between the main cast. You can put the whole party in a house and it would still lead to a lot of hilarious interactions and you won’t get bored at all. Every character has their own set of characteristics which makes them unique. Expect a variety of shenanigans from the crew. 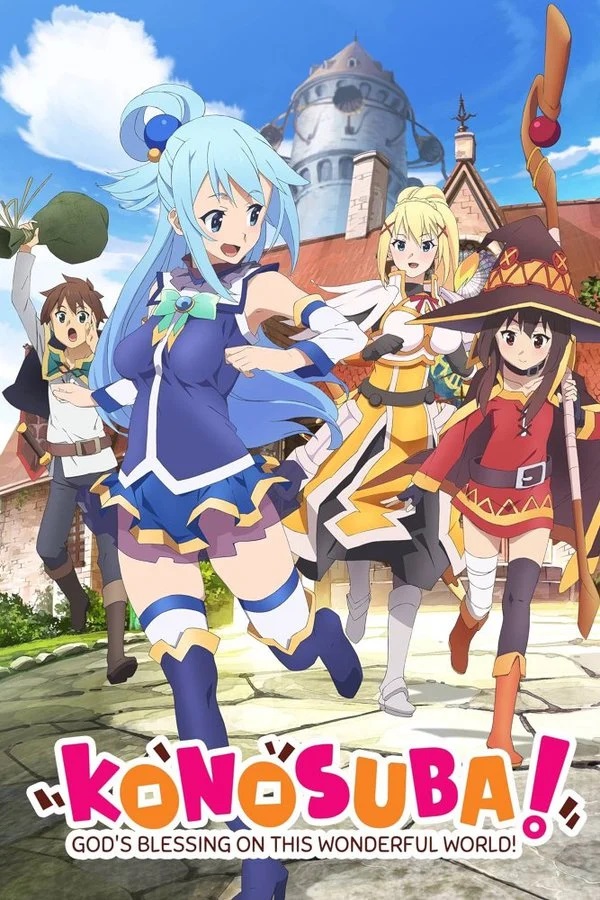 Kazuma is the ultimate chad

Although I liked all the characters, Kazuma was a clear standout. Konosuba wouldn’t be the same without Kazuma as the main character. He binds the whole show together. In other words, he brings out the best in everyone. Kazuma is what you would call a hikikomori, he was a shut-in and barely had any relations to the outside world. Still, he became social and outgoing upon entering the fantasy world. He adapts to the situation quite well. Kazuma is consistently sarcastic, cynical, and blunt, especially towards his teammates. Kazuma can be brave, surprisingly intelligent, and tactical when the situation calls for it. He is also a very good leader.

Nobody is perfect, so Kazuma also has his fair share of flaws, he can be very lazy and cowardly. On top of this, he is also a huge pervert. But this is what makes him realistic. And of course, he is an “advocate of true gender equality”.

Aqua is useless (an important characteristic). She is very cheerful, carefree, and gullible. She acts on her whims. I liked how she can’t lie to save her life, when caught lying, all it takes are pinches to her cheeks for Aqua to reveal everything. Also, her antics to increase her following and seek praise were pretty funny.

Darkness, a tall and beautiful crusader who is also a masochistic pervert. Her masochistic tendencies are the drive behind most of her actions. Despite having a sword, she can’t hit her target. She’s the ultimate shield one could ever ask for

Megumin or you could say the best girl. She is very childish, immature, and eccentric. But who cares, she has explosion magic. Also, she shines with an explosion in the Konosuba movie. 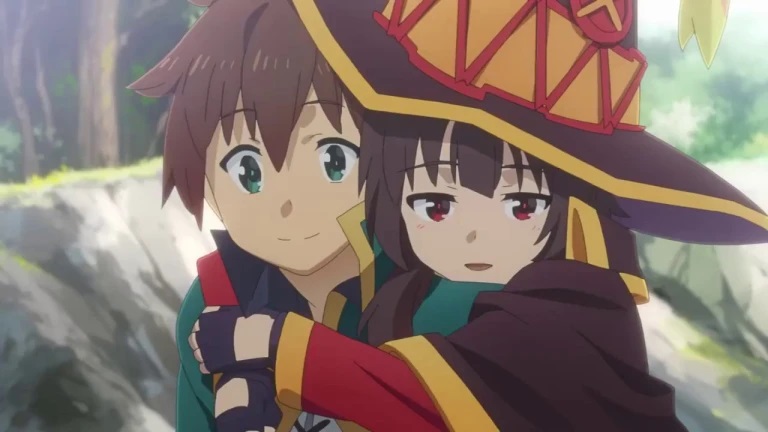 Although sloppy at times, the animation was mostly consistent and fairly well done. The anime was bright and colorful. The art style was made to be a bit different from the much prettier light novel illustrations, which I think was a wise decision given the art style was a perfect fit for the silly tone of the show. Character designs are not distinct as they are just like run-of-the-mill designs from fantasy adventure games. But the characters are so well done they make the style their own.

The voice acting was also really good. All the voice actors for the main cast were brilliant. Timing is key in comedy, and I dare say they nailed it. The OSTs were also very good, it complements the vibe of KonoSuba. Also, The opening and ending themes were quite fair as well. The anime is faithful to the light novels. It pulls off the cheerful and silly vibes.

All in all, I enjoyed watching KonoSuba.

KonoSuba doesn’t take itself too seriously, and neither should you. Therefore, just lay back and enjoy the greatness.